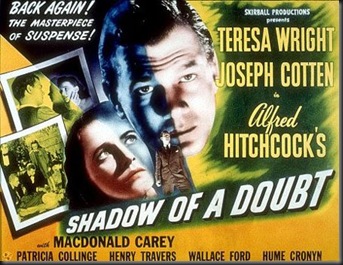 Shadow of a Doubt (1943) was Alfred Hitchcock's fifth American film and the first of his films that he believed truly depicted America. Hitchcock's "first draft" attempt at this had been Saboteur (1942), but he hadn't had the cast he'd wanted, he felt the script was weak and that he'd been rushed into the film before he was ready...none of this was the case with Shadow of a Doubt. 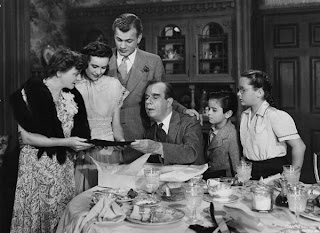 The narrative was based on a story called "Uncle Charlie" by Gordon McConell. For the adaptation, Hitchcock got Thornton Wilder, convinced that the author of Our Town possessed the concept of small-town America he wanted for Shadow of a Doubt. Wilder, who helped Hitchcock select Santa Rosa, California, as the setting, wrote a prose outline of the story before being mobilized into World War II. Hitchcock then turned to screenwriter Sally Benson, another writer deeply steeped in Americana. Her "5135 Kensington Avenue" stories had been the basis for Meet Me in St. Louis.

The opening scenes of Shadow of a Doubt make it clear that the man we come to know as Charles Oakley (Joseph Cotten) has sinister secrets and a dark side, so when he descends on pristine Santa Rosa and his sister's family, the Newtons, we already know that something is quite wrong, but we don't what it is. Oakley is handsome and smooth. His voice is velvet and his manner is insinuating; he has seen the world and flaunts his style and money with confidence. When he comes to stay with the Newtons, their staid community is bedazzled and responds by immediately embracing him. 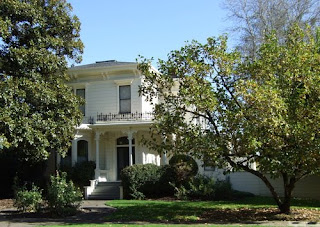 At the heart of the film is a doppelganger motif personified by young Charlie (Teresa Wright) and her Uncle Charlie. They are admitted "doubles," 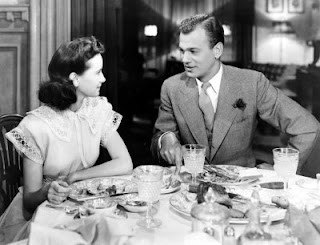 she was named for him and adores him; he obviously favors her. The two Charlies seem to have a psychic link, share a restless spirit and other traits. But one of the pair is pure while the other is corrupt, and the two eventually come to an unbridgeable abyss and a stand-off. Teresa Wright delicately renders Charlie as an intelligent and decent girl impatiently verging on womanhood. Intuitive and strong, she has her mettle tested and must grow up quickly and profoundly when she realizes her beloved uncle is a cold-blooded killer. Uncle Charlie, intricately wrought by Cotten, is a ruthless sociopath of indecent charm. His view of humanity is far beyond cynical: "Do you know the world is a foul sty? Do you know if you ripped the fronts off houses you'd find swine?" 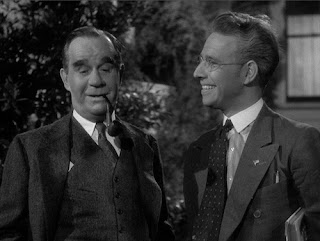 Wright and Cotten contrast and play off each other beautifully; their scenes together are rock solid. Backing them up is an excellent supporting cast that includes Hume Cronyn making his memorable film debut as the Newton's eccentric next-door-neighbor; Henry Travers, cozy and congenial as small-town-dad Joe Newton; Patricia Collinge, note-perfect as fluttery and sentimental Emma Newton. Also very watchable are Edna May Wonacott as the cheeky little sister and Wallace Ford as a detective on Oakley's trail.

Shadow of a Doubt has been called Hitchcock's first fully-realized masterwork. I'm not so quick to write-off his direction and overall imprint on Rebecca, but agree that Shadow of a Doubt, multi-layered and meticulously orchestrated, is among his very best films. The juxtaposition of a simple and complacent American small town with the lethal killer creeping toward its heart is neatly executed, and the early kinship that becomes a battle-to-the-death relationship between the two Charlies ensures that the dramatic tension never eases up.

What are your impressions of Hitchcock's vision of America in Shadow of a Doubt? Any comments about his style and technique or technical aspects of the picture? Which of the performances are standouts for you and why? Does it seem to you that the film is referencing the international situation of the time? What other films owe a debt to this one? ...And have you heard about or noticed the repeated use of "twos" or "doubles" (starting with the two Charlies) in Shadow of a Doubt?
Posted by Kimberly J.M. Wilson at 7:29 AM