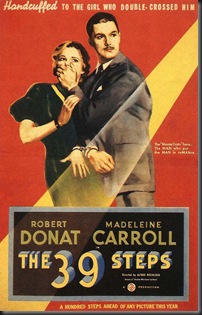 In his 18th effort, legendary British director Alfred Hitchcock created a film that brought him to the notice of American audiences and Hollywood. The film, The 39 Steps (1935), also introduced two classic Hitchcockian themes: the MacGuffin and the average, innocent man (Robert Donat) who finds himself forced into extraordinary circumstances to prove his innocence.  In addition to these two themes, the film also has another classic Hitchcock element: an icy blonde heroine (Madeline Carroll).  You combine these three components with a masterfully plotted script and you have the first of many classic Hitchcock films.

The screenplay was based on John Buchan’s 1915 novel of the same name. While Charles Bennett is given the screenwriting credit, both Hitchcock and his often used dialogue writer Ian Hay (an author in 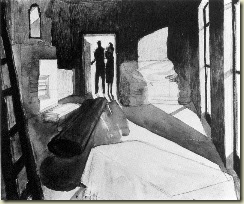 his own right) also contributed to the film’s tightly-constructed script. As most Hitchcock fans know, he wanted a script that was visual in nature so his favorite directorial tool, the storyboard, could be precisely created to match the script.  I once read somewhere that Hitchcock’s storyboards were so precise that he never looked through the viewfinder while directing—he didn’t need to. Even today, Hitchcock’s storyboards are something to marvel. Perhaps that is why Cinemek created a Hitchcock storyboard app for the iPhone?

The story takes place over a four-day period in both London and the Scottish highlands. As with most Hitchcock films, The 39 Steps begins innocently enough, with the 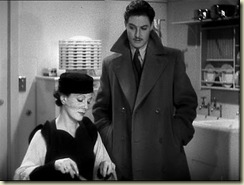 film’s hero, Richard Hannay (Donat) attending a vaudeville show starring Mr. Memory (Wylie Watson).  However, his life soon becomes complicated when he takes Annabella Smith (Lucie Mannheim) back to his rented room after shots are fired in the theatre. Unbeknownst to him, Ms. Smith is a secret double agent hiding from two men from an organization known as, you didn’t guess it, the 39 Steps, that want to kill her.  The poor sap even jokes about it when she lets him in on her predicament. He stops laughing when she ends up with a knife in her back and two men outside his window seem like they might want to kill him, too.  And, so with the knowledge that Ms. Smith was supposed to stop British military secrets from being smuggled out of the country by a spy missing the top of his little finger and who works for the 39 Steps, Hannay sets out to do her job. First step, pry the map of Scotland out of her cold, dead hand, and notice that she’s circled the town of Alt-na-Shellach. Second step, get out of the building without being noticed by two men outside. He does this by borrowing the milkman’s hat and coat and then he takes a train to Scotland. 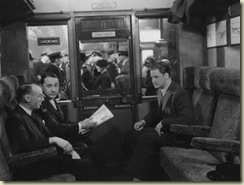 Whilst on this train, two very important things happen. First, he learns that Ms. Smith’s body has been found and that he is the prime suspect. This leads to the other important thing: to avoid identification he pops into the compartment of our Hitchcockian icy blonde, Pamela (Carroll). Perhaps she was mad that he kissed her before a proper introduction, but once she catches her breath she alerts the police to his presence and he has to make another daring escape.  Don’t worry, they’ll meet again.

Not able to make it on foot to Alt-na-Shellach before dark, Hannay finds shelter with a religious fanatic (John Laurie) and his young wife Margaret (a very young Peggy Ashcroft). Unlike Pamela, Margaret helps Hannay escape the police when her jealous and greedy husband tries to turn him in for a reward. Hannay then 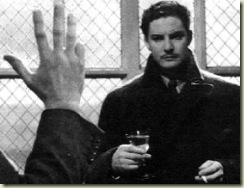 finds his way to the house of Professor Jordan (Godfrey Tearle), the man whom he mistakenly believes is Ms. Smith’s ally. This myth is soon dispelled when Jordan shows him his deformed little finger and shoots him point blank. Ah, thank goodness Margaret had given Hannay her husband’s coat as a disguise—it had a thick prayer book in its breast-pocket. You gotta love, Hitch!

He ends up in the local sheriff’s office recounting the events that led to his would-be murder and narrow escape. He finds himself handcuffed (but by only one wrist) and ready to be turned over to London authorities when he makes yet another escape.  This time he hides out at political rally where he meets up with Pamela again. She evidently doesn’t like him, because she alerts the authorities once 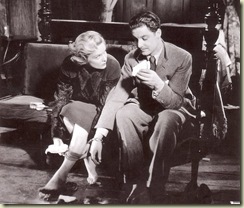 again. Ah, but she alerts the “wrong” authorities this time, and she finds herself being taken to the professor’s house with Hannay. Conveniently, the spies handcuff Pamela and Hannay together. And, so when he makes yet another escape she has to come along too—she’s actually drug, but that’s just semantics. Anyway, this leads to some rather interesting scenes at an inn between the warring couple. Carroll is your typical Hitchcock ice queen—eventually she melts. She and Donat do a nice job of playing off one another, and the love-hate relationship that develops between their characters is palpable.

This being a suspense film, I won’t give away the ending.  All I’ll say is that it takes place at the London Palladium and it is quite circular.  However, it is Hitchcock’s newfound love of 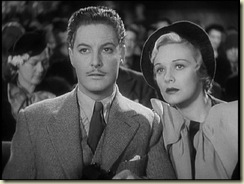 the MacGuffin that makes the ending so enjoyable. What are the 39 Steps and how can the military secrets be smuggled out of the country without detection? It is, as my old friend M. Night Shyamalan would say, a twist. And, what is a good suspense film without an even better twist? Hitchcock would use the MacGuffin device in many of his best films, such as  Vertigo, The Lady Vanishes, North by Northwest, The Man Who Knew Too Much, and, of course, Notorious.

Not my favorite Hitchcock film, that honor rests with Notorious, The 39 Steps is still an enjoyable piece of cinema.  I really think this film helped shape and define Hitchcock’s style for the rest of his career.
Posted by Kimberly J.M. Wilson at 1:39 AM