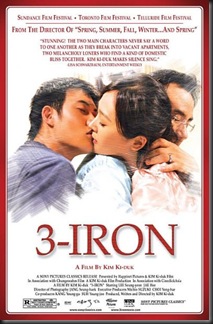 This strange, but watchable Korean film from director Kim Ki-duk is in a category all its own. Short on dialogue and long on psychological motivations, it truly is a cerebral film. While the film is only 90 minutes long, it seems much longer—not that this is necessarily a bad thing, but its overall pacing is something that might deter some viewers. 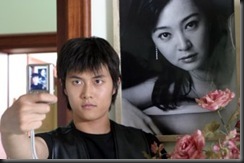 Lee Hyun-Kyoon (AKA Jae Hee) gives an extremely subdued performance as Tae-suk, an over-accommodating uninvited house watcher.  Confused? I was at first, too.  Tae-suk has a strange racket: he tapes take-out menus over the keyholes of prospective houses he might want to “watch”.  He returns days later to see if any of his menus are still in place. When he finds one he breaks into the house and makes himself at home. Yet, instead of robbing these places he does the owner’s unwashed laundry, waters and prunes plants, and fixes broken things. Mind you, all of this is done in silence, with intermittent music by Sivian and an occasional TV or answering machine voice.  The premise is so bizarre that it takes awhile before you truly grasp what’s happening.

Since this isn’t a performance art film, something has to happen to move the story along, and that’s where Sun-hwa (Lee Seung-yeon) comes into play. Unbeknownst to Tae-suk he breaks into a house where battered housewife Sun-hwa silently watches him in her home. 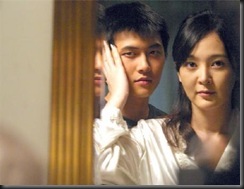 He is there for quite some time before he even notices she is there.  Not one for human companionship, Tae-suk leaves the home but then decides to teach the abusive husband (Kwon Hyuk-ho) a lesson. Hence, the title of this film: 3-Iron (Bin-Jip). After getting the husband’s attention by practicing golf in his yard, Tae-suk proceeds to hit the man with golf balls when he comes outside to complain. Perhaps it isn’t a naval officer coming to your factory and sweeping you off your feet romantic, but it works for Sun-hwa and she leaves with Tae-suk. Mind you, they have not spoken one word to one another--Really. And, so we now have two strange “house watchers.”

The couple eventually run into some trouble when they discover an elderly dead man in one of the houses.  As if taking care of the plants wasn’t enough, the couple clean the man up and prepare him for burial.  When relatives arrive at the apartment and find the couple they assume Sun-hwa and Tae-suk are murderers and the couple finds themselves in jail. Things aren’t easily cleared up when the suspects take remaining silent to a whole new level, but eventually they are cleared of any crime.

In some strange twist, the abusive husband bribes a police officer to allow him to hit Tae-suk with golf balls. This leads to Tae-suk choking the officer and being taken off to jail while Sun-hwa has to go home with her bastard husband. While in 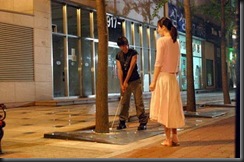 jail, Tae-suk engages in his usual strange behavior: he hits imaginary golf balls with imaginary clubs and plays a game of hide-and-seek inside his cell with the prison guards. This “where is Tae-suk” game is quite interesting to watch…especially when he hides so well that we see him following a guard around the cell. This leads, once he is released from jail, to the even stranger ending of the film.  Having perfected this technique, Tae-suk can rejoin Sun-hwa in her own home without her husband even knowing it—really. It is a film you have to see to understand, and even then, you might find yourself questioning what really has taken place.

Both Lee Seung-yeon and Lee Hyun-Kyoon are really good at conveying their character’s emotions without the use of words. Restrained, nuanced performances are rare in cinema today, but that is how I would describe the work of these two actors.

Not a film for everyone, 3-Iron is still an innovative film that most viewers will enjoy. However, if you are a dialogue-driven film watcher, this might not be the film for you.
Posted by Kimberly J.M. Wilson at 5:11 PM