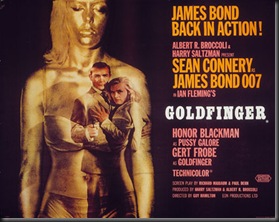 At a beautiful resort in Miami, British secret agent James Bond (Sean Connery) is relayed a message from MI6 head, M (Bernard Lee). Bond’s friend and occasional confidante, CIA agent Felix Leiter (Cec Linder), informs 007 that he is to watch a man named Auric Goldfinger (Gert Fröbe), who the spy catches cheating at a game of gin rummy. However, Bond’s true assignment is to learn

how Goldfinger, who by all intents and purposes is a legitimate jeweler, is moving his shipments of gold bullion. As 007 is told, since gold can be melted down, tracing any of the precious metal that has been stolen is nearly impossible. The superspy trails Goldfinger, always accompanied by his mute henchman, Oddjob (Harold Sakata), from London to Switzerland, eventually uncovering Goldfinger’s plan known as Operation Grand Slam. Bond, with the help of a fully loaded Aston Martin DB5 and shaken, not stirred, martinis, must halt an attack on Fort Knox.

Goldfinger has become the “go-to” Bond film since its release in September 1964. It popularized a number of 007 elements, most notably, perhaps, the title song performed by a famous singer, in this case Shirley Bassey. Bassey would also be the only musician to perform a Bond title song more than once, having the honor again in Diamonds Are Forever (1971) and even a third time, as a last-minute replacement for Johnny Mathis in Moonraker (1979). A title song performed by a well known singer would become a staple in the Bond series, with 1969’s On Her Majesty’s Secret Service being the sole exception. 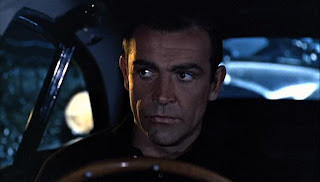 This is the first film of the series that 007 orders a martini “shaken, not stirred” (although in 1962’s Dr. No, the titular baddie serves the secret agent a martini, knowing how he likes it mixed). This is actually taken from Ian Fleming’s novels and would become such a celebrated trait of the films that it was sometimes parodied, such as You Only Live Twice (1967), when he accepts a martini inaccurately stirred, and Casino Royale (2006), when an irate, preoccupied Bond refuses to specify a mix. According to actor Desmond Llewelyn, who plays Q, director Guy Hamilton instructed Llewelyn to play his character as if he disliked 007, since he has no respect for his gadgets. This method led to numerous sarcastic remarks from a perpetually exasperated Q, as well as one of his best known lines spoken in Goldfinger: “I never joke about my work, 007.” Although Bond was given a gadget-laden briefcase in the previous year’s From Russia with Love, Goldfinger popularized Bond’s visit to the Q-Branch, as Q explains to him his latest gadgets (as well as the audience treated to various additional gadgets in the testing phase).

Editor Peter Hunt, who worked on Goldfinger, had reconstructed From Russia with Love into a nicely paced action feature. His most noteworthy contribution was creating a pre-credit sequence. With Goldfinger, Hamilton and screenwriters Richard Maibaum and Paul Dehn turned the pre-credit scene into a movie all its own, with Bond in the midst of an assignment that has nothing to do with the forthcoming mission. Most of the subsequent movies adopted this format. 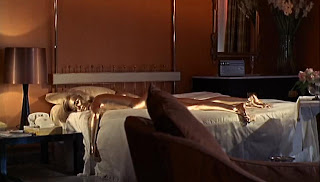 Goldfinger is likely the most popular of the Bond films. In addition to the distinctively mixed drinks and Q berating Bond, there are a number of things viewers tend to remember about this film: the golden fate of Jill Masterson, the introduction of the Aston Martin, the movie’s theme song (I personally cannot speak the title, choosing instead to sing it). But one of the most memorable components of Goldfinger is Goldfinger himself. Bond’s chief antagonist is a charming, brilliant man, and he’s an impressive and fascinating figure to watch onscreen. One reason for this is an outstanding performance from Fröbe, a German actor who could not speak English and was consequently dubbed for the film. He plays Goldfinger with a style that can easily be equated to 007. But more than anything, the manner in which the villain transports gold and his plan that he ultimately reveals to Bond are ingenious, and even if he is a self-centered, egotistical, malicious person, it is difficult not to respect him for his methods.

Honor Blackman as the provocatively-named Pussy Galore gives a strong showing in Goldfinger. Before being cast in the film, Blackman had just ended her contract on the successful British series, The Avengers. Her co-star, Patrick Macnee, would star in another Bond film, A View to a Kill (1985), and her replacement, Diana Rigg, would catch Bond’s wandering eyes in On Her Majesty’s Secret Service. To round out the Bond-Avengers connections, Joanna Lumley, who would be featured in The New Avengers with Macnee, had a small role in On Her Majesty’s Secret Service. Prior to Goldfinger, both Blackman and Shirley Eaton, who played Jill Masterson, had made appearances in another popular British TV show, The Saint, starring future 007, Roger Moore. Following the film’s 1964 release, Lois Maxwell, who played Moneypenny in numerous Bond films, and one-time Felix Leiter, Cec Linder, both starred in episodes of The Saint. 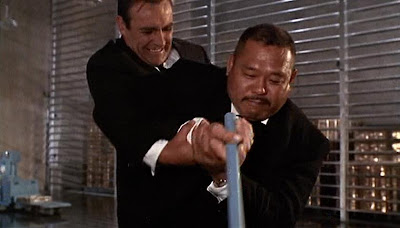 Toshiyuki “Harold” Sakata, of Japanese descent and born in Hawaii, was a professional wrestler, wrestling under the name Tosh Togo. Although he has no lines, his portrayal of Oddjob would make the character one of the best of the 007 series. The weaponized bowler hat was Fleming’s creation, but it is Sakata who flashes a wicked grin when Bond’s attempts to subdue him prove futile. Reportedly, Milton Reid, who’d previously had a small role as a guard in Dr. No, was up for the part of Oddjob and challenged Sakata to a wrestling match (to determine who would play the henchman) that never materialized. Reid would have a significant villainous role in The Spy Who Loved Me (1977). Linder is a standout among the many actors who would play Felix Leiter, pleasant and a worthy counterpart to Bond. 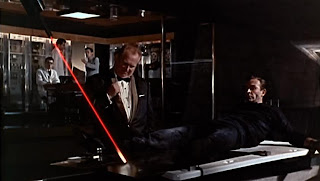 Goldfinger was a huge international success, breaking box office records and earning back its three-million dollar budget in just two weeks. Just a little more than a month before the premiere of Goldfinger, Bond creator/novelist Ian Fleming died of a heart attack.

Goldfinger is one of my favorite Bond films and is typically the one that I will recommend to potential 007 fans. Connery is terrific, of course, and there are many significant aspects of the film: a great villain, plenty of action, and excellent music.