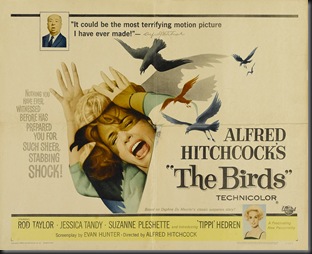 Alfred Hitchcock’s most divisive thriller finds the Master of Suspense in magician mode. On the surface, The Birds is a traditionally-structured horror film, in which the bird attacks build progressively to three of Hitchcock’s most intense sequences. However, this is just Hitchcock performing a little playful sleight of hand with the audience. Our feathered friends play a strictly peripheral part in moving the plot along. In actuality, The Birds is a relationship movie about another memorable Hitchcock mother, her adult son, and the women who threaten to come between the two—a theme explored by Hitchcock earlier in Notorious and Psycho.

In The Birds, the son is the bland, but likable, Mitch Brenner (Rod Taylor). Mitch’s mother (wonderfully played by Jessica Tandy) fears losing her son to another woman—not because of jealousy, but because she can’t stand the thought of being abandoned. Young socialite Melanie Daniels (Tippi Hedren) views Mitch as a stable love interest, something she needs as she strives to live a more meaningful life. And Annie Hayworth (Suzanne Pleshette) is the spinster schoolteacher, willing to waste her life to be near Mitch after failing to pry him from his mother. 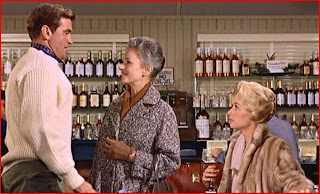 These characters come together when Melanie follows Mitch to his home in Bodega Bay after a flirtatious exchange in a pet store. Melanie’s arrival coincides with the beginning of the bird attacks. It’s almost as if the birds arrive to prevent any potential love between Mitch and Melanie, perhaps an extension of Mitch’s mother’s anger at having to defeat another rival for her son’s love. (Taken to the extreme, there could a parallel between the birds and the creature created by Morbius in Forbidden Planet). However, although the birds initially come between Mitch and Melanie, they eventually have a very different impact. They allow Melanie, who first appears spoiled and shallow, to show her courage and vulnerability. In the end, Mitch’s mother no longer sees Melanie as a threat, but as a woman worthy of her son. Once the friction between those two characters is resolved, the bird attacks stop and the movie ends. Hitchcock’s conclusion—often criticized as ambiguous—is perfectly logical.

Hitchcock goes to great lengths to misdirect his audience by disguising The Birds as a conventional thriller. Always concerned with audience expectations, the Master of Suspense told French director/film critic Francois Truffaut in Hitchcock, a brilliant collection of interviews: “I didn’t want the public to become too impatient about the birds, because that would distract them from the personal story….” For that reason, the first bird attack comes at twenty-five minutes into the film and occurs toward the end of a playful scene in which Melanie races her boat while Mitch drives along the lake road trying to beat her to the dock.
﻿﻿﻿ 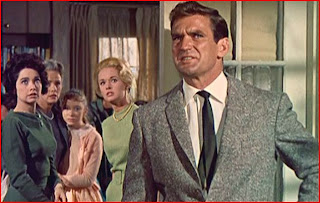 ﻿﻿﻿From that point on, the birds become progressively more menacing and their appearances more frequent: Mitch sees them on the power lines after Melanie visits for dinner; a bird crashes into Annie’s front door and dies; birds swoop down to break up a children’s birthday party; they fly through the open flue into Mitch’s house; and Mitch’s mother find the first human victim in a farmhouse. (I love how Hitchcock uses broken teacups in this scene to foreshadow the impending horror. Earlier, he shows Mitch’s mom picking up broken teacups after the birds-in-the-flue incident. Then, when she visits the apparently empty farmhouse, she sees broken teacups hanging on their hooks—just before discovering the bloody, eyeless body.) 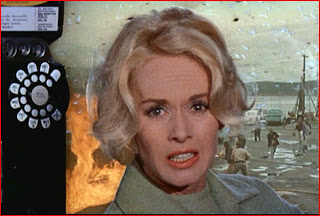 The remainder of the film consists of the three major set pieces: the bird attack outside the school-house; the attack after the gas station blows up; and Melanie’s struggle with the birds in the attic. Again, following the classic horror film structure, Hitchcock separates each sequence with a transition scene that allows the audience to relax and catch its breath. The scene in the restaurant with the ornithologist is one of Hitch’s rare missteps in The Birds; as Truffaut points out, it goes on too long without contributing to the narrative structure. I won’t dissect the birds’ attack on the school children—it’s an iconic sequence—but I strongly recommend that Hitchcock fans seek out Dan Auiler’s Hitchcock’s Notebooks, which include the director’s hand-drawn storyboard and notes. Though less famous, the burning gas station sequence is no less impressive. In the midst of the terrifying chaos, Hitchcock shows Melanie protected—and trapped—inside a phone booth. This “glass cage” is a marvelous metaphor for her previously sheltered life (also symbolized by the lovebirds in the birdcage) from which she is rescued by Mitch (literally…when he pulls her from the phone booth).

The three years between Psycho and The Birds (1963) comprised the longest gap between Hitchcock films up to that point. Much of that time was spent dealing with the technical difficulties in bringing Daphne du Maurier’s short story to the screen. In Truffaut’s book, Hitchcock admits that he discovered narrative weakness in The Birds as he was shooting it. A compulsive pre-planner, who storyboarded every shot in every film, Hitchcock began to improvise during the shooting of The Birds: “The emotional siege I went through served to bring out an additional creative sense in me.”

That creative genius is captured for all to see in The Birds. From its use of bird sounds in lieu of music to its disturbing closing shot, The Birds is an atypical Hitchcock film which finds the director in a mischievous mood. He gives us a classic chiller, but then reveals that it’s all wrapping paper and that’s what inside is a relationship drama. It’s an unexpected gift and, hey, Hitchcock even includes a birthday party for us—although it’s disrupted by those darn birds! 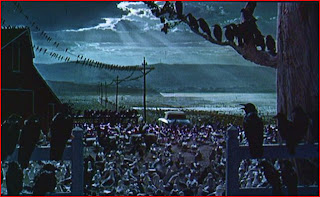