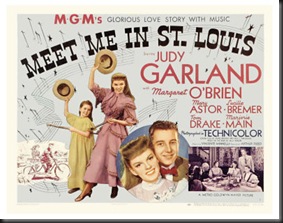 One of the most charming and potent portrayals of Americana to ever grace the screen, Meet Me in St. Louis tugs at the heartstrings as powerfully today as it did 65 years ago when it was first crafted by MGM's "Freed Unit" and released in 1944. 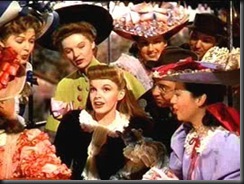 The film's wondrous perfection is the work of producer Arthur Freed, director Vincente Minnelli, a bravura ensemble cast, an ace artistic and technical team, songwriters Ralph Blane and Hugh Martin and...Technicolor.
This is one of my all-time favorites...
Meet Me in St. Louis was adapted from a series of reminiscences by Sally Benson that first appeared in The New Yorker in early 1942. Told from the perspective of five-year-old 'Tootie' Smith, Benson's memory pieces, though rich in warmth and humor, were light on plot and conflict. A more defined storyline was developed, the characters were strengthened and 17-year-old Esther Smith (played by Judy Garland) became the pivotal character. The story evolved into a "year in the life" of an idealized American family and was comprised of vignettes set in each of the four seasons with its dramatic climax, a family crisis, set at Christmastime.

The Smith family home at 5135 Kensington Avenue was the film's central interior and Minnelli made the decision to build a continuous set with interconnecting rooms, just like an a actual house. He reportedly wanted the entire picture to have the look of a painting by Thomas Eakins (1844 - 1916, above is his Baby at Play) and art director Preston Ames' assignment was to recreate a St. Louis neighborhood, circa 1904, as evocatively as possible. Ames did so spectacularly, creating a full block of Kensington Avenue (at a cost of $200,000) on Metro's back lot.

Focused on the film's visual look and intent on accurate period detail, Minnelli supervised every aspect of set and production design. He brought in top Broadway set decorator Lemuel Ayres and, in addition, spent time with Sally Benson who described to him every feature of her girlhood home in St. Louis. To handle costume design, he turned to Irene Sharaff, another recent Broadway-to-Hollywood transplant. Sharaff researched the historic era carefully, even using a 1904 Sears & Roebuck catalog as a reference.

Minnelli and cinematographer George Folsey, a master of fluid camera work, took such pains with the film's colors and textures that many scenes do resemble period paintings. This was the first MGM film to be fully shot in Technicolor, and Folsey and Minnelli proved to be adept at the use of color, even managing to capture subtle changes in seasonal light.

The songwriting team of Ralph Blane and Hugh Martin composed three very special songs for Judy Garland: "The Boy Next Door," "The Trolley Song," and "Have Yourself a Merry Little Christmas." Each became a standard in Garland's later repertoire and "Have Yourself a Merry Little Christmas" remains a holiday classic today. To add more period flavor, Blane and Martin also reworked popular tunes from the turn of the century - "Meet Me in St. Louis," "Skip to My Lou" and "Under the Bamboo Tree." Up to this time, most films had music inserted arbitrarily, but the songs in Meet Me in St. Louis were integrated into the action and dialogue to help advance the plot.
With such meticulous preparation and skilled collaboration, Vincente Minnelli's genius for utilizing and showcasing light, color, form and movement was able to soar.

Meet Me in St. Louis was an immediate hit, the highest grossing film of 1944. It turned out to be just the tonic a country at war needed to lift its spirits. The film firmly established Minnelli's reputation as a top director, provided Judy Garland with a solid push to the next plateau of her career and toward her ultimate status as a legend, and it ushered in a golden age of Hollywood musicals.

There is much to love about Meet Me in St. Louis. For me its charm is that, though nostalgic, the sentiment isn't heavy-handed. The film beguiles gently, taking one on a fanciful, many-faceted trip back...into a golden epoch. The turn of the century in America is depicted as a languid time before the World Wars and the Great Depression, an era when multi-generational families lived under the same roof...when mothers made vats of ketchup every summer in large, window-filled kitchens...when horse-drawn ice wagons regularly clattered down neighborhood streets...and when a young lady might easily fall in love with and dream of marrying a boy who lived right next door...

As Esther Smith, Judy Garland glows as the film's heart and soul. She is at her best - wistful and endearing, spunky and warm, her voice at an early peak. 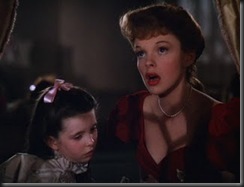 As I write, an image of Judy Garland drifts through my mind...it's a wintry night...she and Margaret O'Brien lean together, framed by a bedroom window...and Judy sings...