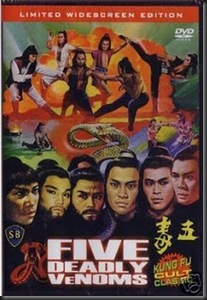 In the 1978 cult kung fu film, The Five Deadly Venoms (aka The Five Venoms), a dying sifu ("master" or "teacher" in Chinese) tells his pupil of a "Poison Clan" consisting of five students. The sifu had taught each member of the clan a very specific and deadly technique: the Centipede, the Snake, the Scorpion, the Lizard and the Toad. The clan had long ago disbanded, but since the students hid their identities (even from one another, always wearing masks), their master does not know their whereabouts. He asks his pupil to ensure that the former students are not utilizing their skills for evil deeds. The young fighter has been taught each of the five techniques, but since he has not focused on a single one, he will only be able to defeat an opponent if he aligns with another.

When I was younger, there was a local cable channel that often ran obscure movies, typically of the horror variety. But if it was not a horror film, chances are it was a '70s Hong Kong kung fu action pic. I saw The Five Deadly Venoms many years ago, and for the longest time, I could not recall the title. There were three distinguishing characteristics of the film that I never forgot: different men with unique styles, one in particular with his hands posed like snake fangs (and yes, it was the Snake); a villain boasting of killing someone without anyone knowing it was murder (he simply drove a hook up the nose and... well, you get the picture); and one of the fighters was seemingly indestructible, and his opponents continually tried to find his weakness.

I was happy that I eventually discovered the film again and enjoyed it immensely. The fight sequences are outstanding. By the time this film was released, director Chang Cheh had mastered the kung fu film. He was one of the most prolific directors at Shaw Bros. Studio in Hong Kong, having also helmed the classic 1967 One-Armed Swordsman, which made a star out of Jimmy Wang Yu (one of the biggest actors in Hong Kong before that Bruce Lee guy came along). What also makes The Five Deadly Venoms great is an undeniably strong story. The fact that the young pupil has to first identify each former student adds an element of mystery to the action film. It's not just a movie about kung fu fighters in combat. It's about loyalty and trust, two attributes which prove necessary for survival in a world of poison clans.

The year of 1978 also saw the release of Crippled Avengers, which was released in the U.S. as Return of the Five Deadly Venoms. It was certainly not a sequel to Five Deadly Venoms, but a few of the actors appear in each film, and, not surprisingly, Chang had his directorial hand in both. In Crippled Avengers, a man discovers his wife killed and his son crippled (his arms have been severed). Years later, father and son (now with deadly arms made of iron!) seek to harm whomever they so desire. Four of the men crippled by the two vengeance-minded villains band together to stop the familial rein of terror. Though the two films are connected only by (U.S.) titles, they make a terrific double feature.