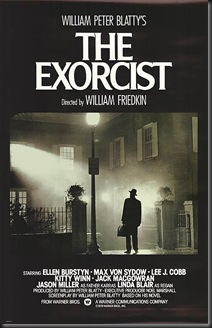 only worsens. When the medical professionals cannot adequately explain some of Regan’s more bizarre actions (one doctor suggests that muscle spasms were causing an entire bed to shake), Chris turns to Father Damien Karras (Jason Miller), a priest and psychiatric counselor. Father Karras, who has recently begun to question his own faith, eventually requests the Church’s permission to perform an exorcism. Finding a priest with experience in exorcism, the Church sends Father Merrin (Max von Sydow).

The Exorcist (1973) is based on the novel by William Peter Blatty, who also wrote the screenplay adaptation. The author had wanted William Friedkin to direct. Friedkin had recently won an Academy Award for Best Director for The French Connection (1971), and Blatty had hoped that the filmmaker’s gritty, documentary style would add realism to The Exorcist. Friedkin’s approach to the material is straightforward, a deliberately but effectively slow build to a menacing evil. On occasion, the film indeed feels like a documentary, as viewers watch Chris gradually learn what is happening to her daughter. 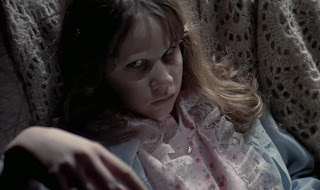 Blatty was not pleased with the version initially released in theaters, due to scenes that were cut from the film. Though the director has stated that he cut sequences at the bequest of the studio, the novelist felt that these scenes -- including a staircase conversation between the priests during the exorcism, with Karras questioning why Regan was chosen -- were essential to the plot. According to Friedkin, the excised scenes resulted in the two men not speaking to each other for years. Following the 25th anniversary DVD release, Friedkin returned to the source material and edited the cut scenes back into the film. Another sequence that had been removed was what has become known as the “spider walk” scene, where a contorted Regan does a reverse crawl down the stairs. Friedkin was unhappy with the effect, which was later digitally corrected (i.e., the visible cable could be erased).

There is the belief by some that The Exorcist was a cursed film. There were rumors of accidents on the set, sometimes resulting in injuries. Members of the crew or people related to them died during filming, such as Jack MacGowran, who played Chris’ director and possible love interest. Friedkin allegedly asked Father Thomas Bermingham (a technical advisor who also had a role in the film) to exorcise the set. When the film was released, viewers claimed to be possessed or experiencing extreme psychological reactions, some referencing the purported “subliminal” flashing of a demon’s face (although it’s not genuinely subliminal, since it’s clearly visible). Some audience members would prematurely exit the theater during a viewing or would become physically ill. Blatty, however, attributes this not to scenes of demonic possession but rather the sequences of Regan undergoing strenuous tests such as a pneumoencephalography (enduring a needle in her neck and having her head taped down, among other things).

The Exorcist was such an overwhelming success that it sparked a horror subgenre of possessed people and the resulting scenes of exorcism. Not surprisingly, clones and sequels invariably followed. Some of the more interesting takes on The Exorcist were: Alberto De Martino’s L’anticristo (1975/aka The Antichrist; The Tempter), Exorcismo (1975/aka Exorcism), starring popular and prolific Spanish horror star Paul Naschy (sometimes called the “Spanish Lon Chaney”), Un urlo nelle tenebre (1975/aka Cries and Shadows; The Possessor; and even the blatant Naked Exorcism, The Return of the Exorcist, and The Exorcist 3); and La endemoniada (1975/aka Demon Witch Child; The Possessed), directed by Amando de Ossorio, better known for his Blind Dead series. A Turkish film, Seytan (1974), is clearly an unofficial remake. Similarly, William Girdler’s Blaxploitation feature, Abby (1974), starring William Marshall (perhaps best known as Blacula), was sued by Warner Bros. for copyright violation. Mario Bava’s film Lisa and the Devil (aka Lisa e il diavolo), released before The Exorcist in 1972, was reedited with new footage added and retitled The House of Exorcism for its 1975 U.S. release. 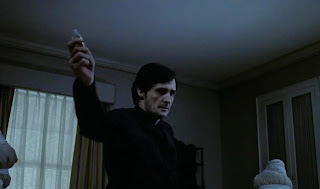 John Boorman helmed Exorcist II: The Heretic in 1977. It follows Father Lamont (Richard Burton) investigating a death resulting from the exorcism of Regan. Blair reprises her role, and von Sydow appears as Father Merrin in flashbacks. The film performed poorly at the box office. Blatty fared a little better with The Exorcist III (1990), based on his novel, Legion, which was also the movie’s original title. The author wrote and directed the film, but the studio compromised his efforts, demanding rewrites, reshoots, and a title change. It featured George C. Scott as Lt. Kinderman and Ed Flanders as Father Dyer, both characters having appeared in the first film (Lee J. Cobb, who played Kinderman in The Exorcist, died in 1976). Jason Miller also makes an appearance as Patient X (with the insinuation that he is Father Karras, a studio alteration). Reportedly, the footage that Blatty originally shot has since been lost, which has been blamed on Morgan Creek Productions. The same year as The Exorcist III, the Exorcist parody Repossessed, starring Blair and go-to funnyman Leslie Nielsen, was released.

In 2003, Paul Schrader was fired as director of an Exorcist prequel (he had replaced John Frankenheimer, who had died in 2002 before filming had started). Schrader’s work was completely revamped by director Renny Harlin, and the movie was released in 2004 as Exorcist: The Beginning. After a poor reception of Harlin’s movie, Schrader was given additional funds to finish his nearly completed film. The movie, title Dominion: Prequel to the Exorcist, received limited theatrical showings and subsequent video/DVD release in 2005. Although the film likewise was not well received, it’s generally preferred by fans of the series. Blatty publicly supported Schrader’s film, while expressing discontent for the 2004 version.

In 1980, Blatty wrote and directed The Ninth Configuration, an adaptation of his 1978 novel of the same name, itself a reworking of his own 1966 book Twinkle, Twinkle, “Killer” Kane (also an alternate title for the film). The author reputedly considered it a sequel to The Exorcist. A notable connection between the two films is Capt. Capshaw (Scott Wilson, who was nominated for a Golden Globe), an astronaut with a fear of dying in outer space, and it was supposedly Capshaw to whom Regan is referring when she speaks her famous line: “You’re going to die up there.” In addition to Wilson, the film was nominated for a Golden Globe for Best Drama and Blatty won for adapted screenplay. Several cast members, including Wilson, Miller, Flanders, and Nicol Williamson, would also star in Blatty’s The Exorcist III. The Ninth Configuration was not a success at the time of its theatrical release but has since gone on to achieve cult status. 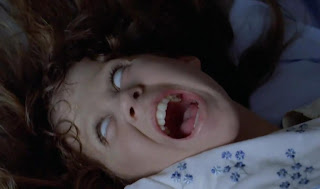 Friedkin has boasted that he originally edited The Exorcist at the New York office building located at 666 5th Avenue. Radio and film actress Mercedes McCambridge provided Regan’s raspy voice during the young girl’s possession but did not initially receive a promised screen credit. She (and the Screen Actors Guild) were able to get her name added to the credits. The film’s original trailer, consisting of black and white flashes of a demonic face and a possessed Regan coupled with ear-piercing music, was supposedly banned by executives as it was deemed too frightening to play in theaters.

The film was nominated for 10 Academy Awards, winning for sound and adapted screenplay. It won a Golden Globe for Best Picture, with Golden Globes awarded to Friedkin, Blair and Blatty.

Recently, Warner Bros. released The Exorcist on Blu-ray, presented in a “book” format with details of the film and trivia. The two-disc set includes the original theatrical version and the director’s cut (released in 2000 as “The Version You’ve Never Seen”), as well as previously available and brand new features.