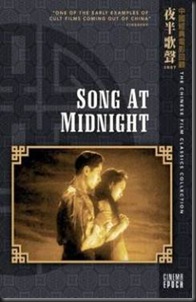 To say Song at Midnight (Ye Ban Ge Sheng) is completely unknown to contemporary film audiences would be an understatement. Yet, it is considered by many film historians to be one of the best Chinese films of the early sound era. There are many things to admire about this 1937 picture, but I would like to focus on its unusual take on a classic tale and its outstanding set design.

There have been many film adaptations of Gaston Leroux’s novel The Phantom of the Opera (most notably the 1925 classic starring Lon Chaney), but Song at Midnight is perhaps the most 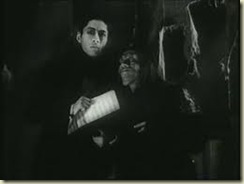 unusual. Director and screenwriter Ma-Xu Weibang took a chance when he took liberties with Leroux’s original story, but his gamble paid off in the end. Instead of making the protégé a female opera singer, Ma-Xu decided that the story would work better if the singer were a male.  This really changes the story’s dynamics and it also ends up making the Phantom a more sympathetic character.

The story takes place at a run-down theater, where 10 years earlier the great opera singer Song Danping (Jin Shan) died.  Well, he didn’t really die, but everybody thinks he did. Evidently he has been skulking about making the locals believe 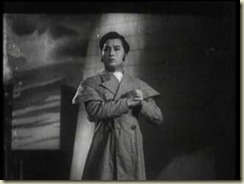 the place is haunted, while waiting for someone with a voice as gifted as his own to make into the greatest opera singer in China.  You see, Song was once a great singer, as well as a  revolutionary himself, but then he went and fell in love with Li Xiaoxia (Woo Ping), the daughter of a vindictive feudal lord and the would-be girlfriend of Tang Jun. This is also an important element of Ma-Xu adaptation, because in the 1930s China was in the midst of political turmoil. In the end, Tang throws nitric acid in Song’s face and he is horribly disfigured. He decides to let the world (besides a few friends), and Li, think he’s dead. And, so when Song hears the voice of Sun Xiao-au he has 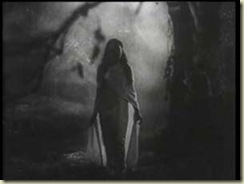 the “voice” and face he needs to make a comeback—and to bring love back to Li.  This is what makes the adaptation so unusual, Song and Sun are more like Cyrano and Christian from Cyrano de Bergerac than the original story of the Phantom and his case of unrequited love with Christine. Of course, things turn a bit nasty when Song learns that Sun has his own fiancee, but in the end, the Phantom of this story ends up being a hero, even though he doesn’t have a happy ending.  Quite simply, it is wonderfully woven story and such a great spin on the traditional Phantom tale.

Besides having a great story, Song at Midnight is also a visual treat. Ma-Xu was a not only a fan of Tod Browning’s Universal monster films, he was also an admirer of German 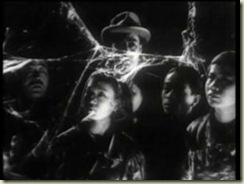 expressionism, most notably the works of Fritz Lang and Robert Wiene. Ma-Xu put together a film heavy with gothic atmosphere and haunting images. Ma-Xu sets the mood from the very beginning, by introducing the audience to the cobweb infested theater at night, and having a mysterious man lurking in the shadows. From that point on the scene is set and what follows truly comes from an artistic mind.

One of the most notable images is when we first see the Phantom’s face. Via flashback and with a handheld camera, we watch 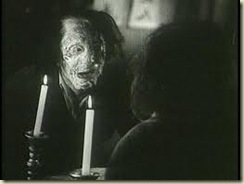 over Song’s shoulder as he slowly unrolls his bandages in front of a mirror.  Not only his reaction is captured in a pristine moment, but the framing of the reactions of those around him are superbly done as well. You can almost feel the recoil of those looking at his disfigured face. When he smashes the mirror it means so much more than just shattered glass all over the floor.

Overall, this is an interesting film to watch.  I’m always curious to see how certain genres took form in different countries.  Ma-Xu borrows heavily from the Universal monster films, especially the opening sequence and the finale with the torch wielding crowd. Of course, it is the reinterpretation of Gaston Leroux’s story that I find the most intriguing.  Sometimes when screenwriters make changes to original stories things don’t work out well, but in this case it was a refreshing retelling of a classic tale.