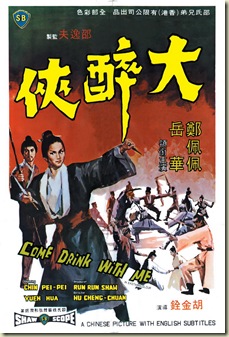 The protagonist of Come Drink With Me (1966) is a petite Chinese woman named Golden Swallow (Cheng Pei-pei…yes, the same lady from Crouching Tiger, Hidden Dragon). Based on this description, you might assume this is one of those Chinese teahouse stories where the main character is either a peasant or a princess who finds herself caught in a love triangle. You would be wrong, but at least you were right about their being a teahouse.  No, Golden Swallow is a sword-wielding badass who likes to lure her adversaries into a false sense of security by sipping tea before she uses her two daggers to slice them up. 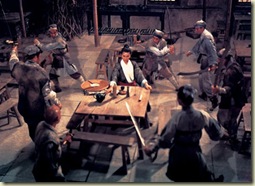 Director King Hu truly revolutionized the martial arts film genre with this 1966 classic.  The overall production standards and fight sequence designs were a great leap forward for Hong Kong cinema.  Concentrating on the areas of color and movement, King Hu creates a martial arts film full of grace and style. His lead actress’s ballet training no doubt helped with the overall gracefulness of her character’s deft movements. Watching her precise and fluid movements in the fight sequences is something to behold.  It is strange to say, but watching her engage in these acts of violence one is reminded of a beautifully choreographed Chinese opera. And she does all this wearing long gowns and

large hats, which I suppose makes her seem even more skilled, as no doubt it was not easy to maneuver in such costumes. King Hu deliberately chose Cheng Pei-pei for Golden Swallow because of her ballet background. An admirer of Peking Opera, King Hu constructed his fight sequences based on the principles of dance.

In addition, King Hu benefits from his other star, Yueh Hua, who plays Drunken Cat, a drunken beggar who assists Golden Swallow in her quest to free her brother, a

local government official, from a group of bandits. We first meet Drunken Cat when Golden Swallow meets with the bandits at a teahouse to negotiate the release of her brother. Things escalate when she refuses to trade the bandits’ leader for her brother—enter Drunken Cat as her secret weapon. More than ten years before Jackie Chan played a drunken master, it was Hua Yueh who brought this martial arts technique to the big screen. It is rumored that he consumed two bottles of wine before filming his fight sequences. It is quite comical to listen to him sing songs from famous Peking Opera’s to help Golden Swallow.

Though they have completely different personalities, Drunken Cat and Golden Swallow work well together.  He serves as a wise advisor and capable accomplice. She’s a hothead who often acts before she thinks. It is through one of Drunken Cat’s opera songs that Golden 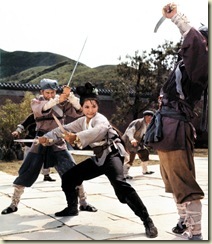 Swallow finds the bandits’ hideout—a spectacularly designed Buddhist temple. The realistic-looking temple was entirely constructed on the Shaw Brothers’ lot. When Golden Swallow is injured there by a poisoned dart, it is Drunken Cat who nurses her back to health and helps her plan her assault on the temple.  Of course, Drunken Cat has his own debt to settle with his brother (Chan Hung Lit), who is both a criminal and an abbot at the temple.  As such, there is eventually a  showdown between the two brothers…and Golden Swallow has her own showdown with the bandits—but in an interesting twist she has a mini-army of female warriors who help her defeat them.

Come Drink With Me might not be the best martial arts film of all time, but it certainly is one of the most important. King Hu truly changed the Wuxi genre by

creating fight sequences that could be viewed as both artistic and powerful. A sequel, Golden Swallow, followed two years later, but it was not as good as the original and there is no Drunken Cat.  However, King Hu would score another hit in 1971, with his best film A Touch of Zen.