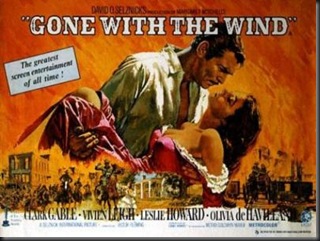 Why, Ms. Scarlett (Vivien Leigh), I do declare that you are one of the greatest female characters, both in film and prose, in American history.  You might be calculating but oddly still stupid at times, but I still like you and your 18 inch waist (pre Bonnie, rest her dear soul). Perhaps I often found myself hoping that Ms. Melly (Olivia de Havilland) would slap you or that a Yankee soldier would defile you—both to teach you a lesson—but I still hoped beyond hope that you would triumph in the end.  Alas, your god and creator, Margaret Mitchell, got it right in the end—let the reader/viewer decide how  your tomorrow turned out.  Of course, had Mitchell known that her money-grubbing descendants would allow Alexandra Ripley to write a trashy sequel (I won’t name the title, but the title is the most creative thing about it…and that’s all you need to know, Ms. Scarlett), perhaps she would have relented about writing the end of your story.  So, what makes you and your film merit a four-star rating, Ms. Scarlett? 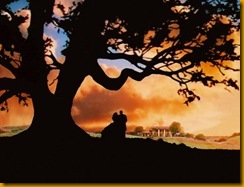 Star one: your theme music.  Dramatic and memorable—just like you Ms. Scarlett. Whenever I hear it I immediately think of the lush green gardens of Tara (and the burning of Atlanta, too—damn those Yankess, Miss Scarlett, damn them!),  Ah, and just like you were robbed by those damn Yankees, composer Max Steiner was robbed by the Academy when he lost the Oscar to some silly guy named The Wizard of Oz—now you know that’s not a decent, Southern gentleman’s name, Ms. Scarlett. Of course, it only makes sense that you would have one of the most memorable film scores ever, Ms. Scarlett, as you are the most memorable female film character in history.  Every badass needs a badass theme song, Ms. Scarlett, and rest assured, when your overpriced barouche is cruising the streets of Charleston (or Savannah, Atlanta, etc.) people know what badass is coming.

Star two: your clothes.  With a figure like yours, 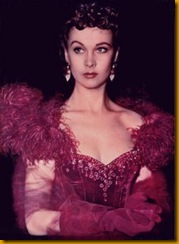 Ms. Scarlett, you would look good in anything.  While I don’t know how wise it is to wear a green and white dress to a BBQ, I still think you make it work—and that green ribbon that attaches your hat to the rest of you could be used as a napkin if need be. What I’m saying is, you know how to make any dress work.  Take for example the white ruffle dress—some people would look like a roll of toilet paper gone wrong, but somehow it looks flouncy on you.  Another example is the red garnet gown that you look ultra-fierce in.  Some people just couldn’t work those feathers and the gauze-veil thingy, but you rock it. And, who but you could make a dress out of green velvet drapes seem stylish (sort of)?  Granted, it was because of those damn Yankees that you had to rip those curtains down and wear the tassels as an accessory belt, but we can’t blame the dress for the circumstances into which it was born. 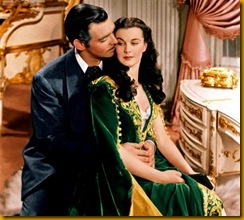 Star three: your crew. Rhett Butler (Clark Gable) may have left you in the end, but while he was with you he was the man in charge.  Your scenes together alone could have burned down Atlanta—damn Yankees.  I have to admit, I just couldn’t understand why you were always after that loser Ashley Wilkes (Leslie Howard) when you had a man like Rhett around. Was it that he rejected you, Ms. Scarlett?  You were just too much woman for that weak man!  He needed a calm woman like your cousin Ms. Melly, so he could continue the cycle of inbreeding. Melly, now there was a woman who knew how to endure, Ms. Scarlett.  Just think of all the insufferable things Aunt Pittypat (Laura Hope Crews) said over the years to that poor girl!  And you thought listening to Prissy (Butterfly McQueen) and Mammy (Hattie McDaniel) all the time was almost too much to bare.

Star four: your attitude.  There’s one thing that makes a person memorable, and that’s their attitude.  Sometimes things don’t go the way you want, but that doesn’t mean you give up. And, Lord knows, Ms. Scarlett you never give up.  Ashley married Melanie, so you married Charles (he was better looking anyway, plus he died and 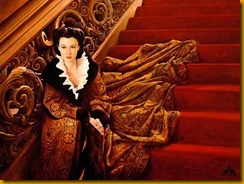 left you some worthless Confederate money—damn Yankees!). When you didn’t have the money to pay the taxes on Tara you and your drape dress found Frank Kennedy.  When the damn Yankees came calling you shot one dead. To me, this is a can-do attitude.  Plus, you always know you are the most interesting woman in the room.  Of course, you do have a a touch of willfullness and a rather nasty temper, but Irish blood runs hot!  Now, if I had to make one constructive suggestion to you it would be this: get over your procrastination issue. Tomorrow might be another day, but sometimes that day can turn out to be really crummy. Still, I like the can-do attitude about getting your man back.

And, that, Ms. Scarlett is why you and your film are so memorable.