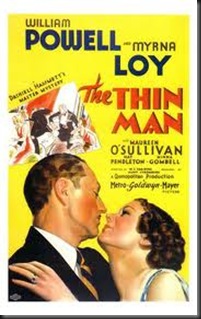 Long before glamorous millionaires Jonathan, Jennifer, and Freeway Hart solved crimes for ABC on Tuesday nights, super-glamorous millionaires Nick, Nora, and Asta Charles were wittily revealing criminals for MGM on the silver screen. The Harts had five seasons to do their worst to the world of white-collar criminals, while the 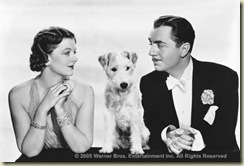 Charles had only 6 feature films. Plus, they looked a billion times better doing it—one crime they didn’t have to solve was the hair and wardrobe of the 1980s!

Born out of the creative mind of one of the greatest authors of detective novels, Dashiell Hammett, Nick (William Holden) and Nora Charles (Myrna Loy) set the bar for all other would-be married sleuths. Sophisticated, witty, and glamorous, the couple could trade rapid-fire dialogue, nonchalantly down martinis and eat caviar, while cleverly solving whatever crime came their way. And, it all started with The Thin Man (1934)—a low-budget MGM film that went on to spawn one of the studio’s most profitable film series, as well as a long-running radio serial and a short-running TV series starring Peter Lawford. The film earned four Academy Award nominations: Best 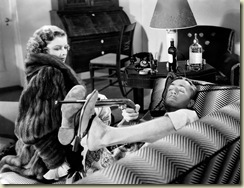 Picture, Best Actor (Powell), Best Director (W.S. Van Dyke) and Best Adapted Screenplay (Frances Goodrich and Albert Hackett, who coincidentally were married). Although it went home Oscar-less, The Thin Man did lose to a worthy adversary: It Happened One Night took home all four Oscars for which The Thin Man was nominated. I, personally, like The Thin Man more than It Happened One Night, but that’s another story for another day.

Powell and Loy made fourteen films together for a reason—they had oodles of chemistry. It started with Manhattan Melodrama in 1934(also directed by Van Dyke) and ended with The Senator Was Indiscreet in 1947. Yet, The Thin Man is their best film together (although I am also partial to The Great Ziegfeld…but why didn’t Billie Burke play herself?).

The film has way too many twists and turns to give a full synopsis. As such, I will give the abridged 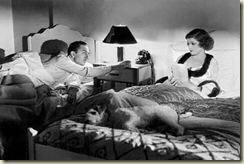 version. The Thin Man is inventor Clyde Wynant (Edward Ellis)—a man who has been swindled out of $50,000 in government bonds by his two-timing mistress Julia (Natalie Moorhead).  When he goes missing his daughter Dorothy (Maureen O’Sullivan) becomes worried and asks former detective Nick Charles to find him. Recently married and always inebriated, Nick and his wife Nora just want to drink, eat and be merry, but greedy rich people keep getting in their way—or dead mistresses (Julia) are discovered. Plus, Nora starts to think helping her husband solve a murder would be exciting, so she sets out to convince him to take the case.

I suppose it was pretty exciting when she opened the door to gun-wielding Joe Morelli (Edward S. Brophy)—Julia’s other lover. Or perhaps it was really exciting when Nick cold-cocked her to remove 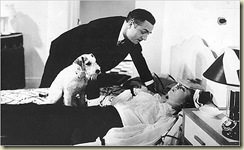 her from the line of fire? Having taken a flesh wound himself, Nick finds himself under suspicion when the police find a gun hidden in one of Nora’s drawers.  Classic line from Nora: "What's that man doing in my drawers?” And, so, after being harassed, shot, and insinuated into the case, Nick goes about finding the killer of not only Julia, but her scar-faced accomplice Nunheim (Harold Huber) and another person…but I can’t tell, or that would ruin the ending! Suffice to say, it is a delight to watch Nick put all the pieces together to solve the murders.

Besides the clever unraveling of the mystery, what makes this film such a blast is the witty dialogue. For example, when a reporter asks Nora if her husband is working on a case she responds: “A case of Scotch. Pitch in and help him.” Another example, and perhaps the best example of the repartee between husband and wife comes when Nora worries that she’s about to become a widow:


Nick: You wouldn’t be a widow for long.
Nora: You bet I wouldn’t.
Nick: Not with all your money. 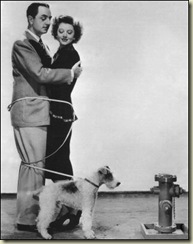 The film is just too full of great lines to repeat them all, but trust me, there are many laugh-out-loud moments.

While it’s not a hard-boiled detective story, it is a film that keeps you guessing to the very end.  I think I prefer my suspense mixed with sophisticated comedy—you get to laugh a lot while watching the mystery unfold.  Plus, beneath the mystery and hilarious barbs, the film is also about romance.  Without even really trying, it turns out to be a film that just about any viewer will enjoy.  Personally, is is one of my all-time favorite films. Plus, it has Asta!!!
Posted by Kimberly J.M. Wilson at 3:00 PM