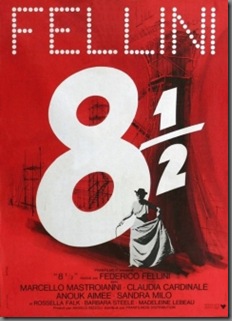 Most critics refer to 8 1/2 (1963) as legendary Italian director Federico Fellini’s masterpiece. Upon release it was lauded as a brilliant film and received several prestigious awards, most notably an Academy Award for Best Foreign Language Film.  I suppose I’m in the minority when it comes to adoring it.  You see, I don’t really do avant garde, and that’s what Fellini’s 8 1/2 is. I much prefer his La Strada (1954) and The Nights of Cabiria (1957) to his later work because I think his earlier films say something about humanity.  That’s not to say that I found 8 1/2 to be horrible and lacking a message—there are many things that I liked, but there were a few elements I found, at times, tiresome.

This is Fellini’s most personal work—a self-reflection of his status as a director and as a man.  The protagonist (and antagonist—can you be both?) is Guido Anselmi (Marcello Mastroianni), an obvious alter-ego of Fellini. Guido has come to an impasse in his directing 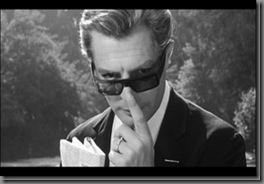 career, where he doesn’t know if he has anything else left to say.  He finds himself overcome with doubt as he struggles to finish a new and costly production.  Lacking inspiration, he escapes into past memories of his past to find something to pull him out of his self-doubt.  At times it is difficult to know if Guido is in the past or the present, as the dream world and reality converge (this is where the surreal Felliniesque world comes into being).  I am not the biggest fan of jumbled narrative, but it isn’t too overwhelming here if you pay attention—if you don’t, then things can go off the rails.  There’s a scene where Guido shoots himself—it took me a minute to realize he only dreamt it, at least I think that’s what happened.

The movie’s look is sleek and stylish.  Shot in black and white 35-millimeter film by cinematographer Gianni Di Venanzo, who employed the spherical cinematographic technique, the overall look is unique and visually stunning.  In addition 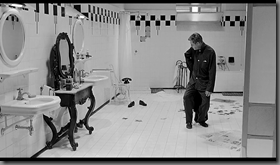 , I found the costume design outstanding.  Each strange character has a wardrobe perfectly matched to their personality.  In particular, the women’s clothing is the most defining.  The purer the character’s motivations the more simple but still chic the clothing is, as is the case with Anouk Aimee’s Luisa (Guido’s wife).  The more vexing and morally corrupt characters find themselves clothed in almost ostentatious couture, such as Sandra Milo’s Carla (Guido’s mistress).

Piero Gherardi won an Oscar for his costume design, but he was also responsible for the set designs—all of which are striking and perfectly Felliniesque. In particular, the scenes at the health spa are 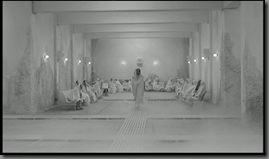 eye-catching and memorable. The bathroom scene, with the three vanities and mirrors symbolizes that Guido doesn’t know who he is anymore. And, the sauna scene symbolizes his clouded state of mind and, perhaps, his insignificance.

I never know how to judge the acting in older Italian films—especially Fellini’s—because the sound was dubbed in after filming was completed.  It’s one of those strange nitpicks I have: how can you emote when you don’t know exactly what you’re saying (Fellini had a habit of writing a lot of dialogue after filming was done)?  Still, Mastroianni plays his Guido as a world-weary complex man well. I also enjoyed watching Aimee’s portrayal of a fed up but somewhat apathetic wife.  Claudia Cardinale, 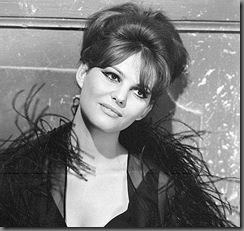 who plays Guido’s muse, floats in and out of the picture, but doesn’t really make her presence known until the film is almost over.  She has the best, and most insightful, line of the film (which she repeats more than once): “Because he doesn’t know how to love.” Now, I could have done without Milo and her grating character Carla.  Of the two versions of this film (I’m speaking of the Rob Marshall quasi-remake Nine (2009)), I’ll take Penelope Cruz’s Carla every time.

Yet another thing that stands out about the picture is the music. Composer Nino Rota was Fellini’s favorite composer, and he does a wonderful job of choosing and crafting music for every scene. His circus-inspired composition “La Passerella” is a perfect way to start off (and end) a film about a ringmaster (Guido the director) who is constantly juggling his many responsibilities (and women). I also thought using Wagner’s “The Ride of the Valkyries” was an inspired choice-what better music is there about overindulgence and psychological distress? Rossini’s overture to “The Barber of Seville” and Tchaikovsky’s “Danse des Mirlitons” from the “Nutcracker” are also used.