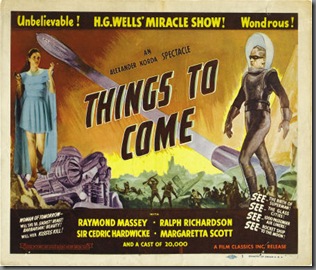 Author H.G. Wells is perhaps the most famous futurist in literature.  When you think of early science fiction his name, along with Jules Verne’s, probably pops into your mind.  Therefore, it is only fitting that one of the first science fiction films, Things to Come (1936), is based on his novel The Shape of Things to Come (1933)—Wells actually wrote the film’s screenplay. While the film is strong on visuals and ideas, it is weak in narrative and characterization.  That said, it is fascinating to see what people thought the future would look like in 2036 (a mere 24 years from now). 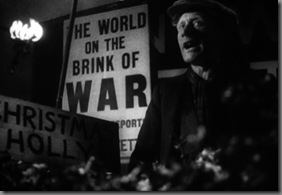 Let’s get the weak elements out of the way first: narrative and characterization. The story predicts that WWII will break out on Christmas Eve 1940 and will last for 25 years. During this time the environment will be contaminated and civilization will crumble.  Set in fictional Everytown, England, the story focuses on how people use technology to create a superior form of civilization. The film is only 100 minutes long, but it covers 100 years of history—this alone makes it difficult to develop a traditional story arc.

It also creates a problem when dealing with characterization. No one can live forever—even in Wells’ science-fiction world—so you have multiple generational characters (played by the same actors) with whom you are unable to connect with on a personal level.  You really don’t care what happens to any of the characters, but you sure do want to see what gadgets the 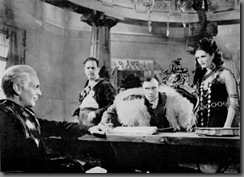 future holds. I like to think that the acting, by such well-known thespians as Raymond Massey, Cedric Hardwicke, and Ralph Richardson, was so bad because the actors couldn’t flesh out their characters.  In particular, Richardson and Massey are the most egregious perpetrators of overacting, and their lackluster performances take a little shine off the overall production.

Yet, while the film has its weaknesses, it is strong when it comes to ideas. Wells was a well-known socialist, and this film is a testament to that.  He predicted WWII would come to England in December 1940 (he was only off by 15 months) and that major cities would encounter devastating blitzes.  Some might argue that he wasn’t that far off in saying that the war would last for 25 years, as WWII might have ended in 1945 but the Cold War continued for another 45 years. Wells infuses the film with his own ideology by writing lines like: “If we don’t end war, war will end us” and “We don’t approve of independent sovereign states.” In his world-utopian vision, Wells creates a Brotherhood of Efficiency (which he also calls Wings Over the World), where the community is more important than the individual.  Quiet frankly, it is an idealized communistic society that conquers nature and then uses 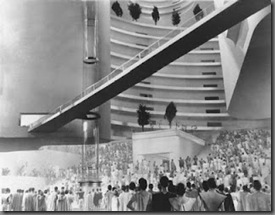 it to expand knowledge and peace.  The fact that England was in the midst of the Great Depression and Hitler was making Europe extremely nervous when this film was released might have made such ideas more acceptable to viewers. Had the film been made ten years later I don’t know if it would have found a distributor in England, and I doubt if it would have even made it across the pond to the United States.  But of course, the U.S. did like the idea of sending people to the moon, so they might have liked that part of the film.

What makes this film stand out the most is its overall visual presentation.  From the blitzed-out city blocks to the underground city of the fantastic future, it is easy to appreciate the craftsmanship it took to first design and then built such spectacular sets.  Yes, there are a few giggle-worthy moments when it’s obvious that you are looking at a remote-controlled tank or plane, but such small hiccups are easily overlooked when you look at the overall 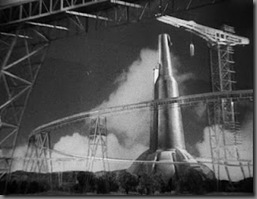 picture and remember that it was made in 1936.  I remember the first time I saw the underground city—I was just amazed how much detail went into it.  I couldn’t help but think that this design put Fritz Lang’s Metropolis (1926) to shame.  Oh, and as if this set alone wasn’t spectacular enough, they built another one for a space rocket that would travel to the moon.  I can’t imagine how director William Cameron Menzies and producer Alexander Korda kept to their 240,000-pound budget. Think about it, they did end their film by saying, “All of the universe or nothing—which will it be?”

If you haven’t seen this yet, it is definitely worth a look for the visuals alone. Block out the overacting and just concentrate on the wonderful, futuristic world that is created—holograms, flat-screen televisions, space exploration, etc.