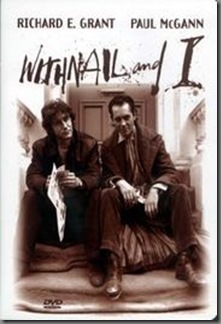 Strange British humor is the best way I can describe Withnail and I (1987).  At times it is irreverently funny, and then there are moments when it just seems inane.  I’m usually a big fan of black comedy, so I was a bit disappointed by this effort by writer/director Bruce Robinson.  The film was semi-autobiographical for Robinson, as it was based on his life during the late-1960s in London, so perhaps more distance from the subject matter would have served him well here. 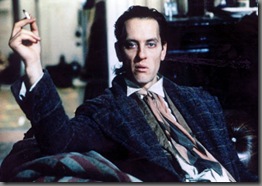 The film takes place in 1969 Camden Town. Withnail (Richard E. Grant) and Marwood (Paul McGann) are out of work actors living in a squalid, dilapidated flat. Something seems amiss with this living situation as it soon becomes abundantly clear that these are two university educated young men.  Withnail’s vocabulary and overall bearing betray him as upper middle-class, and Marwood’s idiosyncratic tendencies make it clear that these two really don’t belong in a building that should be condemned.  Yet, once you know that Withnail is a drunk and Marwood is a paranoid freak you are more accepting of their living accommodations.

The story doesn’t really take off until the guys decide they need a change of scenery and ask Withnail’s Uncle Monty (Richard Griffiths) to let them stay at his country home.  Monty is a stereotypical eccentric gay man who quotes Baudelaire and fawningly reminisces about former paramours.  He’s the best thing about 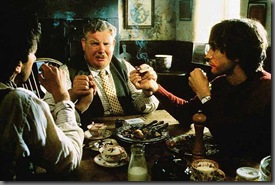 the entire film.  Everything he says and does is funny, especially since there always seems to be some sexual undertone to whatever he says.  For example, in discussing why he prefers carrots to geraniums he says: “I think the carrot infinitely more fascinating than the geranium. The carrot has mystery. Flowers are essentially tarts. Prostitutes for the bees. There is, you'll agree, a certain 'je ne sais quoi' oh so very special about a firm, young carrot.”  His pursuit of a very uninterested Marwood is hilarious—and even a tad sad, too.

As for the two leads, Grant and McGann, they do admirable jobs portraying rather unlikable characters. I think Grant deserves more credit for his performance because he is actually allergic to alcohol, so the idea that he played a complete drunk so convincingly should be 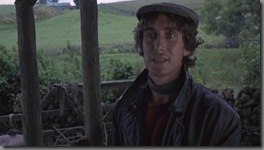 acknowledged.  Still, I found nothing whatsoever redemptive about his character, so it made it difficult for me to care what happened to him.  As for McGann, his overly-neurotic character was annoyingly boring.

I suppose you could call this a coming-of-age story, but it still seems like a film without a plot.  I suspect this is one of the reasons I’m not a big fan of this movie.  Had there been more story development and less focus on ingesting drugs and alcohol this might have captured my attention more.