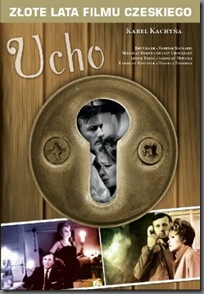 Imagine making a film in 1970 and then having to wait 29-years before anyone could watch it. That’s what happened to director Karel Kachyňa when he wrote, directed, and produced a film that audaciously questioned the methods of the Czechoslovakian Communist Party. Suppressed by the same left-wing leaders that Kachyňa was shining a very bright light on, Ucho (The Ear) is a grim look at what it is like to live in a totali 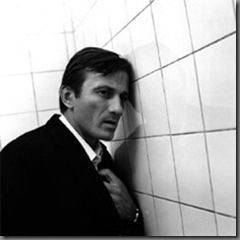 The story takes place over one brief paranoid evening in the life of Ludvík (Radoslav Brzobohatý) and Anna (Jiřina Bohdalová), a caustic married couple. Ludvík is a senior ministry official who finds himself under suspicion when his superior and others in his office are arrested and held for questioning.  Upon returning home from a Party function, he and Anna encounter a house where both the power and phone lines have been turned off.  In addition, there are cars parked outside and men milling about in the garden.  Internal and external panic ensues inside their dark and untidy home, where they fear the “ear” is listening to everything they say and do.

Shot in stark black and white and employing unflinching extreme close-ups and deep focus, Ucho purposefully makes you uncomfortable—because that is how the characters feel.  The first half o 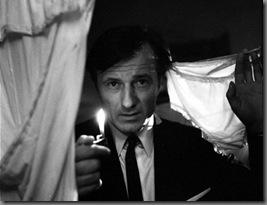 f the movie is shot primarily in the dark, with only candlelight and a small flashlight to shed light on the happenings inside the house.  If Ludvík and Anna can’t see what’s happening to them why should the audience?  Later in the film, when there is a shift in tone and the lights come on, we see a piercing examination of the relationship between husband and wife. Someone should have flicked them off, because this is a couple obviously in need of a good marriage counselor.  She’s a drunk with a nasty disposition; he is a man consumed with getting ahead at all costs. Still, when they are faced with the prospect of Ludvík being taken away, the couple becomes extremely protective and shows a previously unseen tenderness toward one another.

The relationship between Ludvík and Anna has been compared to that of George and Martha in Who’s Afraid of Virginia Woolf? (1966).  While there are obvious similarities (alcoholism and verbal barbarism) between the 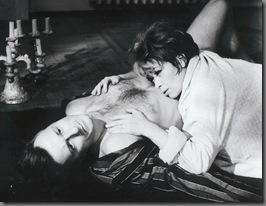 two couples, to diminish the political element would be a mistake.  The fractured martial relationship is nothing compared to the repressive political state in which they live, where psychological terror is the weapon of choice.  It is telling that they last line of the film has Anna saying to Ludvík that she’s sacred—that’s the point.

While Ucho isn’t the greatest film I’ve ever seen, it is one of the most politically daring ones I’ve encountered.  As an American it is difficult to imagine a world where political expression is so easily suppressed, but it ran rampant throughout Eastern Europe during the Soviet Era.  It is because of films like this that I am reminded of how lucky I am to live in a country where free expression is both protected and valued. Karel Kachyňa should be heralded as a hero in the Czech Republic today for having the courage to make a film that stood up to authoritarianism—even if he knew it wouldn’t be seen by anyone for 29-years.