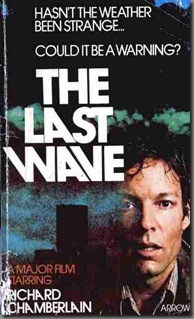 As the world debates the issue of climate change it is somewhat interesting to watch a film like The Last Wave (1977), which touches on the idea of a cataclysmic weather pattern wiping out humankind.  Still, I was very underwhelmed by director Peter Weir’s would-be apocalyptic endeavor.  I enjoyed both Weir’s Gallipoli (1981) and Dead Poets Society (1989), yet the unresolved ending of this movie did not sit well with me. Perhaps this is my own short-falling,  but I like my conclusions to be less perplexing than what I got at the end of this.

Richard Chamberlain plays David Burton, an Australian lawyer assigned a legal aid case involving the murder of an Aborigine by a group of other Aborigines. As Sydney becomes deluged by torrential downpours, David finds himself having both dreams 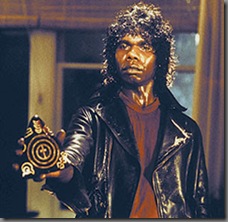 and visions of a coming apocalypse.  Hail, black rain, and even frogs fall from the sky as David attempts to wade through both his legal and personal trial, all the while trying to uncover the tribal secrets that led to the murder in the first place.  Along the way he develops a spiritual relationship with one of the defendants, Chris (David Gulpilil), who sheds light on the Aboriginal concept of Dreamtime (when spirits created the world).  David also becomes the main adversary of the tribe’s shaman, Charlie (Nandjiwarra Amagula), who knows David is a Mukuru, which is some kind of prophet from another world.  To fully understand what he is envisioning David must descend into an underground tribal shrine which explains the origins of the world.  By the end of the movie, it is difficult to know if David is in a state of reality or Dreamtime.

It’s not everyday that you get to see a film cast with actual Aborigines.  David Gulpilil is probably the most well-known Aboriginal actor ever, appearing in such films as Walkabout (1971), The Right Stuff (1983), Crocodile Dundee (1986), Rabbit-Proof Fence (2002), and 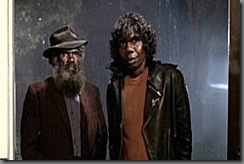 Australia (2008). In all of his roles, this one included, he exudes an unusual presence.  His gaze is always steady and his bearing seems almost otherworldly.  His Aboriginal counterpart, Amagula, is a  virtual unknown except for his work in The Last Wave.  He was a clan leader that the then-Aboriginal Cultural Foundation director told Weir was the “one man who has enough wisdom, enough breadth, enough understanding” to play the role of Charlie.  He brings a highly unusual element to the film—he is both creepy and ethereal.  While I am not a fan of the overall production, I did enjoy watching the work of these two men.  I am always fascinated to learn more about other cultures, and I think with their help, Weir did enlighten his audience about some Aboriginal practices.

There’s another reason I didn’t like this film besides the ambiguous ending: Chamberlain. He’s sooooooo boring!  He does not do well in films

with extended pauses, and there are many in this. In my opinion, he lacks the necessary charisma to do non-verbal scenes.  His stares off into space just seem void of any emotional depth, and when you are the star of a film with countless dream sequences you kind of need to be able to express something more than a look of vapidity.

In the end, I just can’t get past, well, the ending of The Last Wave. Head scratching at the conclusion of a film is just not a good sign.