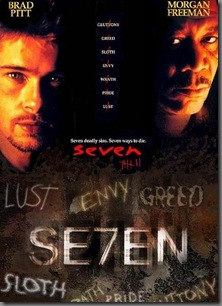 For some reason, cultured serial killers are always the worst. When they base their heinous acts on biblical and classical literature they seem to creep me out more than their illiterate chainsaw wielding counterparts.  Perhaps it’s because I work and live in a world based on knowing and disseminating knowledge. Of course, it doesn’t help that this type of character usually looks harmless, as does Kevin Spacey’s John Doe in Se7en (1995).  Doe bases his murderous acts on the seven deadly sins (more properly known as the Cardinal Sins) and uses quotations from the likes of Aquinas, Chaucer, Dante, and Milton to leave messages for the detectives pursuing him (Brad Pitt and Morgan Freeman).  Atmospheric and edgy, Se7en is an uncomfortable look at the depravity of the times in which we live.

Freeman plays Detective William Somerset, a well-read but world-weary man who finds himself seven days from retirement when he catches a serial killer case 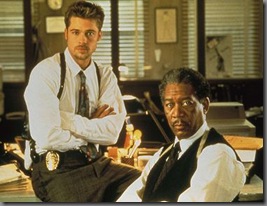 that he’d rather not have.  He is joined on the case by his soon-to-be replacement, Detective David Mills (Pitt), a jaded but still naïve cop who has recently transferred to the police department. The lead character’s name was not randomly chosen by screenwriter Andrew Kevin Walker—he named Somerset after his favorite author, W. Somerset Maugham.  This only adds to the literary allusions throughout the film, when several well-known passages are referenced throughout.  I would even venture to guess that the character of Mills is some type of  proxy for John Stuart Mill and his utilitarianistic harm principle, where each individual has the right to act as they want, so long as these actions do not harm others.

That philosophy, of course, is put to the test when Mills and Somerset come up against a serial killer who thinks he’s doing the world a favor by ridding it of the dregs of society. When explaining why he murdered his innocent victims he says, “Only in a world this shitty could you even try to say these were innocent people and keep a straight face.” 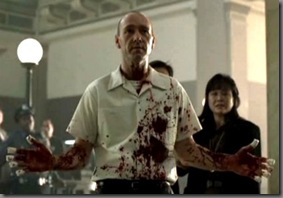 And, that’s the point—they live in some type of apocalyptic world where everything is gray-toned and it never seems to cease raining unless you go out into the countryside.  Evidently the horrible acts carried out by Doe in this No-name city are nothing too out of the ordinary.  This is the reason Somerset wants out and says as much when he explains to Mills why he’s ready to retire: “I just don't think I can continue to live in a place that embraces and nurtures apathy as if it was virtue.” It sucks in No-name city, and the people who live there are complicit in every awful thing that transpires there.  Those who think they can rise above it, like Mills, find themselves completely enveloped by its sinister ways.

While we are spared watching the sickening murders take place, we do have the unwelcome experience of seeing the aftermath of Doe’s actions. Gruesome crime scenes abound, and while they are not as stomach-turning as what you would find in a slasher movie, they are still difficult to look at.  His take on the seven deadly sins is rather imaginative, so I suppose if I were grading his psychopathic artistry I’d have to give him an A.  For me, his '”sloth” endeavor is the more memorable 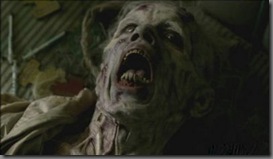 of all his “masterpieces”.  That emaciated body sputtering to life sent a jolt throughout my entire body.  Obviously this was the point in Spacey’s career when he embraced his darker side by playing both Doe here and Verbal Kint in The Usual Suspects (1995) in 1995. He must have picked up a few pointers from Anthony Hopkins’ turn in The Silence of the Lambs (1991) about how to play a cool and calculating serial killer, because he does a nice job of not overplaying Doe’s depravity. 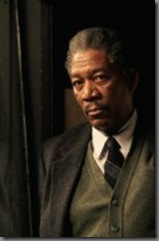 As for Pitt and Freeman, both do admirable jobs with their respective characters.  Freeman, in particular, does an outstanding job as Somerset.  Everyone knows he can deliver his lines with that god-like voice of his, but it is more his non-verbal work here that resonates.  When you are playing a man who is tired of the world it only makes sense that your character should appear physically and mentally drained—Somerset does. Perhaps it’s the way he carries Somerset or how he keeps his eyes and facial features in an almost constant state of underlying tension that makes me believe he has had enough of No-name city and the human race.  The look on his face when he opens up the box of vengeance (I won’t spoil it for those who haven’t seen the film) is priceless.

My biggest complaint with Se7en is Gwyneth Paltrow as Mills’ wife Tracy.  While I know the character is necessary for plot reasons, Paltrow’s performance i

s just beyond boring.  Sure, her character is depressed about living on a subway line in a city where she doesn’t know anyone, but that doesn’t mean she has to be mind-numbingly tiring  to watch.  This role does not suit her at all and would have been better cast with the likes of Juliette Lewis or Marisa Tomei.  Oh, and to make things worse, it was on this film that Pitt and Paltrow became romantically involved, which resulted in more than 2-years of annoying gossip fodder.

Overall, I think Se7en is a highly enjoyable psychological thriller.  It makes you really examine the world in which you live and contemplate how complicit you are in what is happening around you.  Plus, the ending is just beyond shocking and memorable.