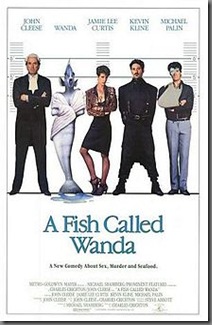 Don’t call me stupid for not loving this 1988 comedy from director Charles Crichton (with an assist from John Cleese). Yes, it has some funny parts, but it is definitely a film I could have died without having seen (although some man in Denmark did laugh himself to death while watching it).  Perhaps it’s the decade in which it was made (the 80s) that makes it shine a little less brightly for me.  There is something about the hideous fashion and over-synthesized songs of that decade that really irks me, and when it is on full display, as it is here, it is even more distressing because it is forever imprinted (quite literally) in the annals of cinema that the 1980s sucked. 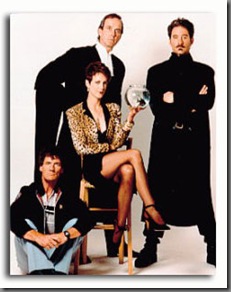 rgeson), a cockney gangster who picks three of the worst criminals in the world to help him pull the job: Wanda, Otto, and Ken.  His girlfriend Wanda (Jamie Lee Curtis) is a complete slut and an even bigger liar. Otto (Kevin Kline) is a pseudo-philosopher and an outright psychopath who pretends to be Wanda’s brother, but is really her jealous lover.  And, then there is Ken (Michael Palin)—a stammering animal lover with absolutely no sense.  When the heist goes awry and George is arrested, the other three scramble to tie up loose ends and engage in wacky acts of betrayal.  In the middle of all this treachery is Archie Leach (Cleese), the barrister working on George’s case who becomes ensnared in Wanda’s sleazy web of lies.  And, no, it is not a coincidence that Cleese chose to name himself after Cary Grant (the real Archie Leach)—he was born 20 miles from Grant’s birthplace and greatly admired him.

Obviously 1988 was a weak year for the Academy Awards, specifically in the Best Supporting Actor category, because Kline won an Oscar for his turn as Otto.  To me, 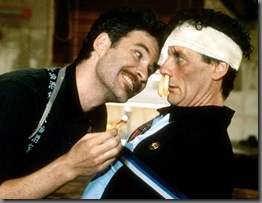 watching him in this was like taking a class in overacting. If anyone in the movie deserved an Oscar nod it was Palin, and even that would have been a stretch.  Of course his scenes attempting to kill Mrs. Coady (Patricia Hayes) are my favorite, so I think that might skew my point of view.  But really, he is quite hilarious as the murderer of three innocent Yorkshire Terriers.  And, when I come to think of it, the only time I found Kline entertaining was when he was doing a scene with Palin.

The story is entertaining and Cleese’s straight-man act is enjoyable, so I can’t really give A Fish Called Wanda a poor rating. Still, Kline and Curtis’ less than stellar performances are grating to me.  Yet, the wardrobe and music 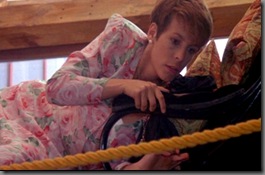 are worse.  Costume designer Hazel Pethig definitely did not benefit from what passed for fashionable in the 80s.  I wonder how much Curtis cringes every time she sees how horrid her wardrobe was.  Oh, and the music (if you can call it that) by John Du Prez is a complete representation of what was wrong about 80s music.

Overall, A Fish Called Wanda is a passable 1980s comedy.  Unfortunately, to watch it you must hear and see everything that makes the decade one of the worst of the Twentieth Century.