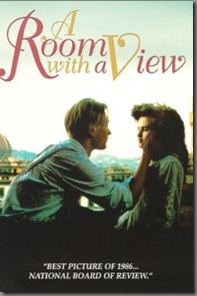 There’s a reason I’ve seen just about every film in Helena Bonham Carter’s oeuvre: she’s one of the best actresses of her generation. Her acting ability is often overlooked (especially by the Academy Awards, which has only granted her two nominations) due to her quirky roles, but even quirkiness requires talent and Carter has loads of that. At the ripe old age of nineteen she appeared (and starred) in her first feature film, A Room with a View (1986)—a movie that garnered eight Academy Award nods and three wins. Her endeavor in this Merchant and Ivory production led to her 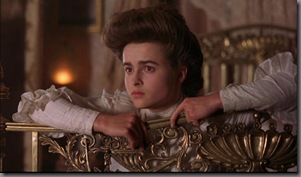 being cast in several period pieces over the next ten years (one being The Wings of a Dove in 1997, for which she received a Best Actress nomination), but it wasn’t until her turn in Fight Club (1999) that her particular quirkiness was allowed to be on full display from that point forward.  It helps that she became romantically involved with one of the quirkiest film directors ever, Tim Burton, in 2001, and that due to this relationship she has found herself paired in six films with Johnny Depp. For someone unfamiliar with her earlier work, A Room with a View might be a bit of a shock, as it is a film about British social conventions at the turn of Twentieth Century and Carter is somewhat restrained by this. Still, there are slight glimpses of what is to come.

Adapted from E.M. Forester’s (Merchant and Ivory’s author of choice) novel of the same name, A Room with a View tells the story of how Miss Lucy Honeychurch (Carter) 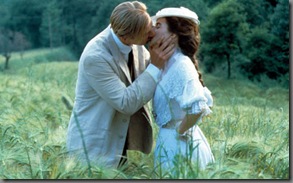 inappropriately found love in the Tuscan countryside with a free-spirited philosopher named George Emerson (Julian Sands).  It is this inappropriateness, which is hilariously pointed out by Lucy’s chaperone and cousin Charlotte (Maggie Smith in an Oscar-nominated turn) that causes a rift in the relationship.  It takes an unbearable engagement to an exhaustingly boring and affected Cecil (Daniel Day-Lewis in an Oscar-nominated role) and the publication of Eleanor Lavish’s (Judi Dench) scandalous novel about Lucy and George’s Tuscan tryst to convince Lucy that there is more to life than social constraints, namely love and happiness 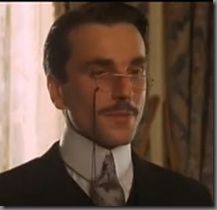 What I like most about the film is the acting performances. With a cast full of then and future Oscar winners director James Ivory had a pretty easy row to hoe with this picture, and I suspect he would be the first to say that his Best Director Oscar nomination and the film’s Best Picture nomination were due in large part to his cast.  As I’ve pointed out in previous reviews, Daniel Day-Lewis is an exceedingly gifted actor. He can play any part and make it completely his own, and that’s what he did with Cecil.  In the hands of a lesser actor Cecil may have turned into a caricature of the cuckolded fiancee. Instead, while Cecil is boorish and priggish he is also engaging to watch because Day-Lewis turns him into a character you 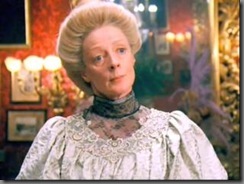 don’t necessarily like but want to watch.  The same can be said of Smith’s role as Cousin Charlotte. No one plays exasperatingly idiotically polite characters like Smith, and that is exactly what Charlotte is. Smith expertly uses body language and facial expressions, not to mention that memorable voice of hers, to turn poor Charlotte into someone you first want to shake and then into a woman you want to embrace.

The pairing of Carter and Sands is an interesting one.  Here are two actors who found themselves on the same career trajectory following the critical acclaim of this film, but one ended up on the A-list and the other on the D-list.  By far Sands’ portrayal of George Emerson is his best—perhaps he peaked too early in his career?  Still, one of the reasons I wasn’t completely enamored with Lucy and George’s pairing was because it was obvious that Carter was by far the more superior actor of the two. 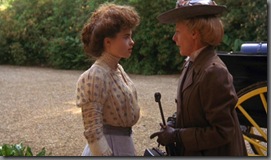 There are several layers to Lucy that must be peeled slowly away as the story progresses and Carter shows an unusual depth of character development for an actress so young. Never is Lucy more enchanting than when she finally tells Charlotte and Cecil what she really thinks of them.  Plucky and perky suit Charlotte, not to mention Carter, quite well.

Of course what would a Merchant and Ivory film be without beautifully designed period costumes (Oscar winners Jenny Beavan and John Bright), expertly crafted sets (Oscar winner), and pristine cinematography (Oscar nominated Tony Pierce-Roberts)?  All of the hallmarks of what comprises a Merchant and Ivory production are present here.  Edwardian clothes don’t excite me, but breathtaking shots of Florence and the Tuscan countryside do.  The first part of the film, which takes place in Italy, is where most of the visually stunning images are captured.  I suspect that is why Cousin Charlotte so desperately wanted a room with a view in the first place.

Overall, A Room with a View is an interesting study in upper-class social etiquette in Edwardian England.  The movie benefits greatly from a stellar cast and a somewhat engaging story.