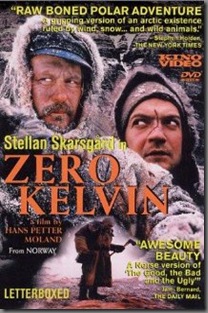 Set amidst the artic elements of Greenland, this Norwegian film from director Hans Petter Moland examines the effects of isolation and brutality on the human psyche.  Beautifully photographed by Philip Øgaard, Zero Kelvin (1995) is predominately a psychological thriller without the usual histrionics associated with the genre. While it is interesting to watch the volatile relationship between the two major characters, the film does drag in a few places, which hampers my overall appreciation of it.

Henrik Larsen (Gard B. Eidsvold) makes a fateful decision when he signs on with the Greenland Company as an animal trapper. Commissioned to write a book about the life of outdoorsmen, the Norwegian gentleman poet is thrown completely out of his element when he finds himself working for a crude, 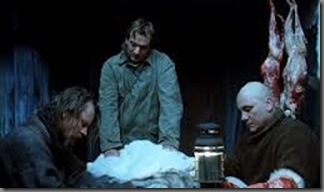 alcoholic foreman named Randbæk (Stellan Skarsgård).  The men are polar opposites, coming from two very different social classes and intellectual levels, and they immediately clash.  The only thing that stands between them killing one another is the pleasant camp naturalist, Jakob Holm (Bjørn Sundquist). When the two rival’s incessant and violent bickering becomes even too much for the peaceful Holm he deserts the camp and leaves the two men to their deathly feud.  It is at this point that the film takes an even darker turn, as Larsen is forced into a duel of survival on the artic terrain against a menacingly cruel Randbæk.

One of the most recognizable Swedish actors of his generation, and known throughout all of cinema as a prolific and versatile actor, Skarsgård plays Randbæk as a deplorably reprehensible character. He seethes with antagonism and almost every word he says drips with venom.  You can’t help but hate Randbæk and feel sympathetically towards 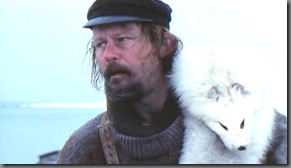 Larsen. From his constant belittling and taunting of Larsen to his extreme cruelty exacted on the sled dogs, you find yourself hoping that he ends up dying painfully slow.  I usually don’t completely despise a character, but with Randbæk I had no choice. Skarsgård has said of the role that he “could see from the outset that it was a rewarding character to play because there were absolutely no limits to what he could do. It's one of the most delicious parts I've ever played. I've never been such a bastard before." That’s more than an apt description of Randbæk—he is a complete bastard.

Perhaps it was the icy, artic air that contributed to how mean Skarsgård made Randbæk appear, because the crisp, austere images captured by cinematographer Øgaard would lead one to believe that only a certain type of person could 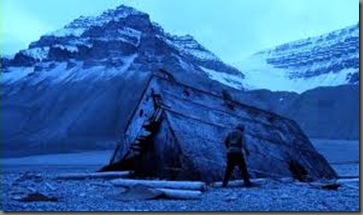 survive in such an environment.  Working above the Arctic Circle in Svalbard, Norway, Øgaard adeptly uses the setting’s natural elements of ice, snow, and wind to create a vast, desolate wasteland which compounds both the characters’ and viewer’s sense of isolation. With his photography he creates a completely punishing atmosphere for an equally punishing story.

However, my biggest complaint with Zero Kelvin stems from Øgaard’s cinematography: the film sometimes drags because so much time is spent looking at the harsh terrain.  I think Moland and his editor, Einar Egeland, could have slightly cut some of the environment shots to keep the story’s pace a bit more engaging.  Yes, Øgaard’s images deserve to be admired for their beauty, but a good director knows when enough is enough.

Overall, Zero Kelvin is a somewhat engrossing psychological thriller with engaging cinematography, but it is not a film that I would categorize as must-see.