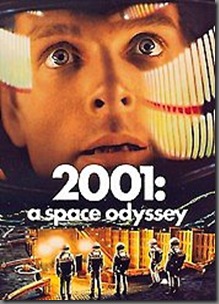 No, I don’t like Stanley Kubrick’s 2001: A Space Odyssey (1968).  I’m sure I have offended countless sci-fi fans and cinephiles, but I don’t care because I find the film beyond boring. Yes, there are several interesting visual images, and for 1968, at the height of the Space Race, it was ahead of its time, but that doesn’t mean I have to revere it or recognize its perceived “greatness”.  The only thing I do like about it is the music—and even that contributes to the overall tedious effect the movie has on me.  If you fall asleep every time you watch something I think that sends a clear message.

Based on sci-fi author and futurist Arthur C. Clarke’s 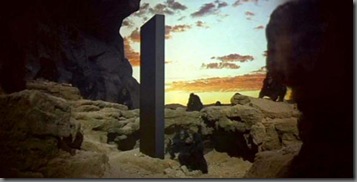 short story “The Sentinel”, 2001: A Space Odyssey is a plodding look at humankind’s relationship with the universe.  There is a monolith that keeps popping up: on Earth at the dawn of man, on the moon, and on Jupiter.  I expect all of these “sightings” are supposed to be tied together, but having not read Clarke’s series I have no idea how, as the film gave me no conclusive answer. I’m a historian by trade, but I minored in philosophy, so I kept asking myself if Kubrick chose to open and close his movie with Richard Strauss’ “Thus Spoke Zarathustra” because he was trying to make some sort of nihilistic statement about Nietzsche’s concept of eternal recurrence and the Übermensch. I suspect this is the case.  Okay, I somewhat understand what he was doing, but what about the average person on the street who never read Nietzsche or Clarke, do they get it?  Probably not, but I don’t think Kubrick cared, either.

I have been told that people liked to drop LSD and then go watch this—I can see that.  There is an abundance of vast spatial dissonance and towards the end there is a plethora of psychedelic images, so I understand how this might appeal to Dead Heads.  For me, 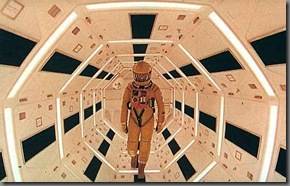 these images did one of two things: made me sleepy and/or gave me a headache. I’m not a special effects geek, and so while it is obvious that Kubrick and his crew were way ahead of their time, it does nothing for me.  Maybe I lack the ability to be awed by these endeavors because so much has been seen and discovered since this film was released.  Still, I can’t see how Pauline Kael wrote in 1968 that 2001: A Space Odyssey was "a monumentally unimaginative movie.” There is plenty of imagination, but, for me, that’s not enough to make me like it.

Minimalism has its place, but too much of it in a film can leave viewers feeling completely detached.  That is the effect that 2001: A Space Odyssey has on me.  Sparse, minimal dialogue; sterile set designs; and, a complete denial of human pathos makes for bad cinema in my book.  To makes things worse, when Kubrick 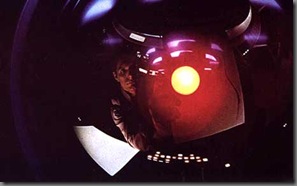 does attempt to make an emotional appeal he does so with the supercomputer HAL (voiced by Douglas Rain), who is represented as both creepy and evil.  Is Kubrick making a statement about emotions?  Is there no room in his future world-view for feelings, and if you do have them does that make you deficient and/or deviant?  For a humanist like myself, that is an unbearable bitter pill to swallow.

The one element of the film that I liked was the music. Kubrick wanted to create a non-verbal experience, and you will notice that he uses music throughout the film except in the rare cases where there is actual dialogue.  While he bookends his movie with Strauss’ “Thus Spoke Zarathustra”, he also creatively uses Johann Strauss’ “On the Blue Danube” and 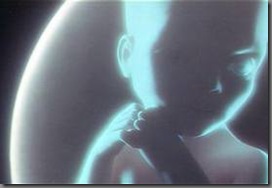 György Ligeti’s Requiem.  Still, even though I found Kubrick’s musical choices inspired, I also think they contribute to my desire to fall asleep every time I watch his movie.

Overall, I don’t dig this film.  To me, it is boring and lacks any emotional appeal.  Yes, there are a number of enticing visuals, but that just isn’t enough for me. Plus, the creepy baby at the end gives me nightmares.