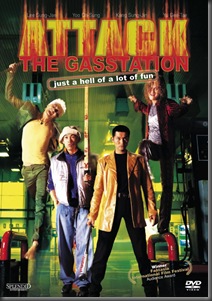 I’d like to say that the meaning of this 1999 South Korean film was lost in translation, but due to it being dubbed in English I can’t.  At first I could only surmise that director Kim Sang-jin was attempting to make an anarchic comedy with Attack the Gas Station. After watching this I went in search of answers: what the hell was it about?  I read that Kim was making a statement about Korean carmakers laying off workers and criticizing American economic imperialism.  Okay, so some of the story made sense after that bit of context.  Still, that didn’t make me dislike the film any less.

The story (written by Park Jeong-woo) is about four young Korean men who rob a gas station because they are bored.  Having just robbed the station a few days prior, the thugs show the viewer very quickly that they are not 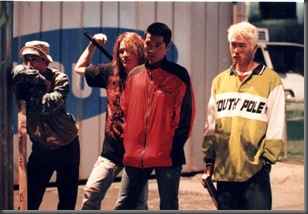 what one would describe as master criminals.  As a matter of fact, three out of four of them are pretty damn stupid.  Mad Dog (Yu Oh-seong) carries a stick around and hits anyone who calls him stupid—a lot of people get hit.  Rockstar (Kang Seong-jin) is a failed musician (probably because he dresses like a bad big-hair 80s band singer) who makes hostages sing so he can hear music.  Paint (Yoo Ji-tae) is an artist who likes to paint lewd images and then throw red paint on them and shout, “Finished.”  Of the four men, there is only one that I found even remotely substantive: No Mark (Lee Sung-jae).  An orphan and a gifted baseball pitcher, No Mark is the leader of this traveling insane asylum, and the only one I could ever envision being a productive member of society.

Kim tries to tie the sens 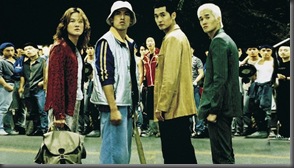 eless violence these men inflict on others together by showing past events in each man’s life that might have turned them into psychopaths.  I was not convinced that these “incidents” were enough to warrant such depraved behavior, and that’s a big reason I really disliked the movie.  While I haven’t read this anywhere, I am convinced that Kim and Park saw Michael Haneke’s deranged Funny Games (1997) and decided they should do a film with similar themes.  I didn’t like the senseless violence of that film, and I most assuredly was not enamored with it here, either.

What makes this movie even more disappointing to me is that the few Korean films I have seen have all been pretty entertaining.  For example, The Good, the Bad, the Weird (2008) is a smart modern spaghetti western with a compelling storyline.  Oldboy (2003) is an inspired revenge tale. And, The Host (2006) is a strange but scary story that leaves you on the edge of your seat.  And, then there’s Attack the Gas Station, which has now diminished my appreciation of Korean cinema.  Oh, and there’s a sequel, too. Really?