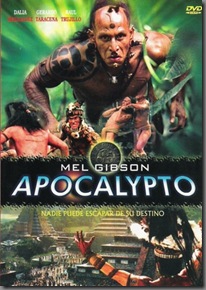 It is rumored that the world will come to an end on December 21, 2012.  By whom, you ask?  Well, there’s a whole host of oracles out there, but the most famous doomsayers have to be the Mayans.  Their 1500+-year calendar ends on that date, and some believe this indicates that the Apocalypse will be upon us.  For my part, I feel as though I’ve been living through an apocalypse ever since the McRib was taken off McDonald’s full-time menu, so I eagerly await the four horseman as long as they are grilling McRibs over the fires of Gehinnom year-round.  MMMM…but back to the Mayans. Yes, there are many people who are predicting the end of the world—granted, mostly insane individuals. That said, who better to take on the Mayans’ own personal apocalypse than director Mel Gibson, who believes the Apocalypse began with Vatican II. 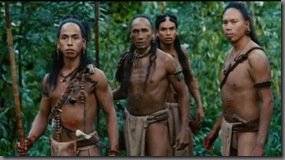 Mel Gibson has directed four films (The Man Without a Face, Braveheart, The Passion of the Christ, and Apocalypto), all of which are unique in their own way. Still, his Passion and Apocalypto are significantly different, in that one is primarily in Aramaic (with a bit of Latin and Hebrew thrown in for good measure) and the other is in Yucatec Maya.  Gibson said he wanted his audience to suspend reality and engross themselves in the visual elements of these films.  I think it adds a realistic touch to both pictures, but I can’t help but wonder if he contemplated the fact that when some people are reading subtitles they can’t focus on anything but the words and then they miss the images. Ah, but who am I to argue with Gibson—I have it on good authority (his) that he is one tough motherf___er ( you fill in the blank, I don’t want the censors to get me).

If you haven’t seen the film (perhaps you don’t like foreign films…or films that appear foreign but really aren’t) let me give you a quick tutorial.  The story takes place on the eve of the Spanish conquest of the Yucatan Peninsula (think that place where Survivor likes to go all the time, Guatemala and lower Mexico) 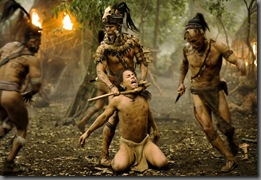 and the Mayan people in the mid-1500s. Jaguar Paw (Rudy Youngblood) and his tribe are jungle dwellers who find themselves overtaken by warriors sent to capture human sacrifices and slaves.  It would seem that a plague has descended on the tribes who live outside the jungle, and the priests have said that only human blood will satisfy the god Kukulkan.  Prior to being taken captive by some really scary men, Jaguar Paw drops his pregnant wife and son down a hole.  His only goal is to escape his captors and return to what is left of his family.

Seeing as the Mayans didn’t have guns or any type of sophisticated weaponry, the film is quite violent.  While bombs blow people up and bullets blow people’s heads off, spears, clubs, arrows, knives, and swords still draw blood.  You know a film is going to be bloodthirsty when one of the first scenes is a wild boar impaled by traps and then gutted for its organs which are passed out as gifts.  By the time you get to the human sacrifice scenes at the pyramid you are more than ready to watch the victims partake in this sacred ritual: stomach slit open; beating heart ripped out; head chopped off; head rolled 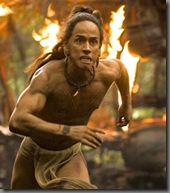 down a very long row of steps; and, for good measure, the lifeless body thrown over the pyramid, too.  No one does human sacrifices like the Mayans—well, actually the Aztecs did them better, but still… If you don’t do blood, don’t do this film.

While the cast is comprised mostly of unknowns, the acting is quite good.  Even though he’s not asked to stretch himself too much, Youngblood is especially good as the determined Jaguar Paw.  Primarily known as a dancer, Youngblood thrives in scenes that require him to show off his agility and athleticism.  The more well-known Raoul Trujillo (who plays 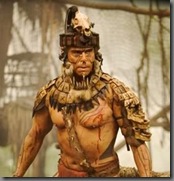 the warrior leader Zero Wolf) is intimidating as the uncompromising villain. His character is the type of “native” you have nightmares about.

Overall, what I liked most about the film is its simplicity.  It’s a treat to watch a movie where the plot is simple, the acting is natural, and the setting is not a product of CGI.  In addition, I found the ending jarring, but in a good way.  Plus, it does prove the Mayans were excellent prophets.  They were right about a plague descending upon them in the 1500s—AKA, the conquistadors. Does this spell doom for mankind in 2012? Maybe. According to the Mayan calendar, 2012 does bring an end to the Age of the Jaguar. Yes, that’s right, our hero’s name was Jaguar P

aw.  So, if on December 21 you feel something like a shift in the earth’s magnetic field remember you have only one person to blame for what’s about to come next—Mel Gibson, he’s about to burn the entire motherf___ing world down. For my part, I’ll be looking for the flames that smell like a pork patty, BBQ sauce, onions, and pickles served on a 5½ inch roll.  If you like, feel free to join me.