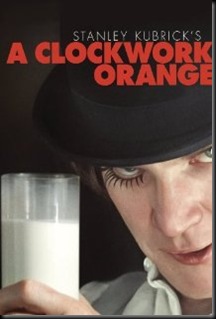 Let me start off by saying that I find director Staley Kubrick’s A Clockwork Orange (1971) to be full of reprehensible violence and depravity—most of it aimed at women.  That said, I cannot deny that he also made a film worth some merit.  While I detest most everything that happens in it, it does raise questions about the relationship 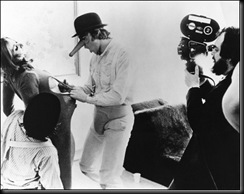 between the state and the individual.  It is also stylishly designed and filled with great music.  Yet, after having watched this a few times before finally getting around to reviewing it, I can happily say that I plan never to watch it again.

Kubrick was not the first director to take on Anthony Burgess’ 1962 dystopian novel A Clockwork Orange. Many believed it could never be brought to the screen due to its complex and controversial themes.  Most are unaware that Andy Warhol and his Factory were the first “auteurs” to take on Alex DeLarge’s psychosis in Vinyl (1965). Simply put, it was horrible (I rue the day when I must rewatch it in order to review it here).  Thankfully, Kubrick’s film is comprised of competent actors working with an actual script and a professional production crew. 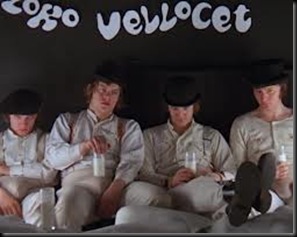 Malcolm McDowell plays Alex, the leader of a gang of “droogs” (James Marcus, Warren Clarke, and Michael Tarn) who terrorize what appears to be a post-apocalyptic English city. In between trips to a milk bar they beat, rape and murder helpless people—a little bit of the ultra-violent (which for a long time I thought was pronounced ultraviolet, which just clouded my mind even more than it already was).  After murdering a rich cat-lady (Miriam Karlin) with a gigantic phallic sculpture (no, I’m not making this up), Alex is sentenced to 14-years in prison.  Wanting to shorten his term, he volunteers for an aversion therapy that rehabilitates criminals.  He undergoes a treatment that forces him to watch graphic images while having drugs flushed through his system which make him physically ill at the sight of violence. On one particular “viewing” the video is set to Beethoven’s Ninth Symphony—his particular favorite piece of music. (I only include this tidbit because it comes to be a form of both retribution and rebirth for Alex by the end of the movie.) Once released from prison, Alex is a helpless sort who cannot protect himself from anyone—those who would wish to do him harm or the state itself.

A Clockwork Orange is violent and misogynistic. People 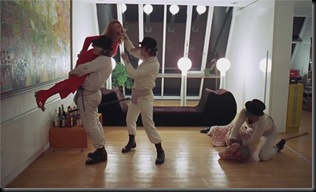 are beaten with canes and phallic sculptures (yes, that again), and there is kicking and the like.  Women are raped and debased, and the female form itself is used in some of the most unusual ways of objectification (see: milk bar).  If I had to hear Alex say “a little bit of the old in an out” one more time I thought my head might explode.  It is specifically due to these elements that I find it exceptionally hard to believe that this garnered a Best Picture Oscar nomination—ah, but it was the 1970s and people were still coming down from their 1960s acid trips I suppose.

What I liked most about the movie was its art direction and soundtrack. Once you look past the more pornographic elements, there is much to admire about Russell Hagg and Peter Sheilds’ art direction. I expect LSD enthusiasts also enjoy the outlandish colors and set pieces that demand you look at them.  I often found the sets more entertaining than 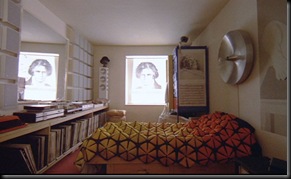 what was being said—they helped me cope with ideas, words, and deeds I vehemently disliked.  The soundtrack was also a soothing agent.  I’ve already mentioned that Beethoven's 9th plays a prominent role, but Rossini’s “The Thieving Magpie” and “William Tell” and Henry Purcell’s "March from 'Funeral Music for Queen Mary'" are also featured.  In addition, Wendy Carlos’ creepy synthesized music fits perfectly with the insidious depravity of this film.

Overall, I dislike A Clockwork Orange, but not as much as I disliked Kubrick’s 2001: A Space Odyssey (which makes a cameo at the record store).  There is a plot and I never once felt as though I were drifting off to sleep—how could I with such shocking images?  Still, this movie is just too reprehensibly amoral for me.