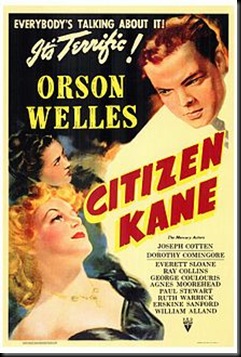 (This is my contribution to the CMBA’s Fabulous Films of the 1940s Blogathon. For more contributions check out this link: http://clamba.blogspot.com/)

What can be said here that hasn’t already been said about director Orson Welles’ masterpiece, Citizen Kane (1941)? Probably nothing.  It is, after all, considered by countless critics to be the greatest film ever made.  As indicated by my three out of four star rating, I obviously do not share that opinion.  However, as a student of film I know that Citizen Kane is one of the most important movies ever made.  The complete destruction of 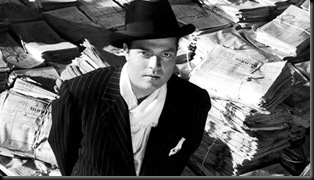 narrative continuity and cinematographic “rules” demands that this film be recognized as the creator of modern cinema.

Welles was only twenty-four when he starred in, co-wrote, and directed Citizen Kane; his first feature film. His innovative stage and radio productions with the Mercury Theatre group propelled him into the national spotlight—particularly after the infamous The War of the Worlds broadcast caused panic across America.  He was courted by Hollywood and eventually RKO landed him. Never having helmed a motion picture in his life, he was given complete and absolute freedom to make two films of his choosing for the studio.  That was a lot of power to give to such a young and inexperienced director—especially one with an ego the size of Texas.  As such, many RKO studio executives were plagued by chronic migraines throughout the entire production.

Of course, it didn’t help that the script crafted by Welles 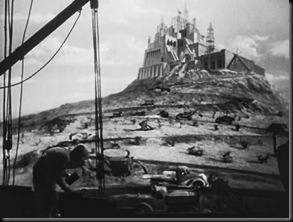 and Herman J. Mankiewicz mimicked (and some would say lampooned) the life of one of the most powerful men in America: William Randolph Hearst. Was Charles Foster Kane a thinly veiled stand-in for the real-life publishing magnate? If you believe Welles, the answer is no. He once wrote that the “only purely Hearstian element in Citizen Kane” was Kane’s publishing machinations regarding the orchestration of  the onset of the Spanish American War.  Yet, Mankiewicz had been a frequent guest at countless Hearst parties and was friends with members of the family, so he certainly had some insight into the Hearst world. And, any truly unbiased person (or one who had no fear of being sued for libel) can see many parallels between Kane and Hearst.  Surely Kane’s Xanadu was a stand-in for Hearst’s La Cuesta Encantada, and while Marion Davies was obviously more talented than Susan Alexander (Dorothy Comingore), they were nonetheless paramours who had their careers advanced by two powerful men.  If you’re interested in delving into this more, might I suggest you read John Evangelist Walsh's, Walking Shadows: Orson Welles, William Randolph Hearst, and Citizen Kane.

Whatever one might think about the Hearst/Kane debate, there is no denying that the complex narrative style used by Welles and Mankiewicz was completely original and totally reshaped the views of generations of screenwriters.  Flashback was nothing new for cinema, but Citizen Kane was told in such a non-linear style, employing both flashbacks and flashforwards as well as quick-swipe montages, that it revolutionized screenwriting.  At 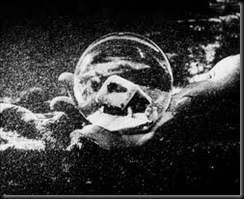 one moment a character is young and spry and in the next frame they are old and frail.  There is no explanation of this rapid transition—it is the viewer’s job to put the pieces together.

Which brings me to my favorite thematic element in the film: the jigsaw puzzle. From the moment Kane’s infamous last word, Rosebud, is uttered Citizen Kane becomes a mystery.  Who or what is Rosebud is what sets the story in search of those who knew Kane best, and allows Welles to employ his own unique storytelling vision. Of course, no one knows the answe

r.  Charles Foster Kane was a jigsaw puzzle that was missing at least one piece, and so no one could really know or solve him.  While I won’t spoil the mystery for those who haven’t seen this, I will say that I often cite this plot device to students as one of the most important in modern narrative development.

Finally, no discussion of Citizen Kane would be complete without mentioning the brilliant cinematography of Gregg Toland and the 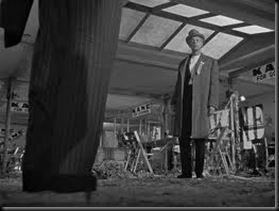 cinematic techniques employed by Welles.  Using the Chiaroscuro method of using high-contrast lighting against backlighting, as well as low-key lighting, created an enigmatic and larger-than-life feel to the film and its main character.  High-angle and low-angle shots, along with deep focus, were used in such unique ways that countless books have been written and film seminars still study them in great depth today.  Two particular scenes are stand outs: the showdown between Kane and Leland (Joseph Cotton) after his election loss and the mirror shot at Xanadu.  Toland  had a trench built into the floor to capture his low-angle shots of the dissolution of Kane and Leland’s friendship.  And, Roger Ebert 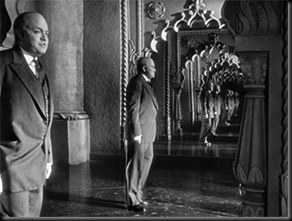 and I agree that the most evocative shot in the movie is “the shot showing an infinity of Kanes reflected in mirrors as he walks past” at Xanadu.  Those multiple reflections (with no hint of a camera anywhere) is one of the most brilliant visual images I have ever seen in a movie (this was before CGI).

Perhaps I haven’t said anything new about Citizen Kane here; I don’t profess to have any new insights into Welles’ vision or Toland’s masterful cinematography. All I can say is this: Citizen Kane is one of the most important films ever made.  No, it didn’t win a Best Picture Oscar or rake in huge receipts at the box office (it actually took a loss), but it revolutionized the art of filmmaking—and for that it should be appreciated and watched.