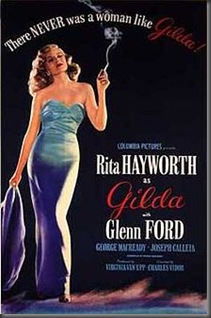 Director Charles Vidor’s film noir, Gilda (1946), is full of sexual angst and self-loathing.  It is also not your typical noir. I won’t spoil the ending, but anyone who has seen it knows that the usual formula is not carried out to its bitter end.  That said, it’s an engaging movie with standout performances by Rita Hayworth, Glenn Ford, and George Macready.  Stylistically, it follows all the rules of a noir, and cinematographer Rudolph Maté does an excellent job of playing with shadows and light.  Still, the ending leaves me a bit cold and takes away from any ecstatic praise I might have given it.

Hayworth was given top-billing over Ford, but in reality it is he w 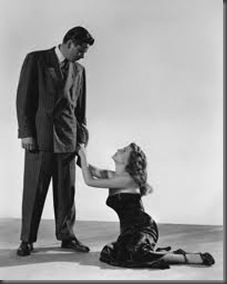 ho is the main character—Gilda (Hayworth) is just his sexy catalyst into the emotional abyss of sexual and psychological obsession. Johnny Farrell (Ford) is both a gambler and a man licking his wounds over a bad romance.  When he meets Ballin Mundson (Macready), the owner of a casino in Buenos Aires, they become fast friends and business associates.  They trust one another implicitly until Ballin marries Gilda. From the very first moment they are introduced it is clear they dislike one another. There’s a reason for this: Gilda is the woman who did Johnny wrong.  What transpires from this moment on is a deadly game of emotional chicken, with scathing verbal barbs and one of the best revenge plans ever. I have to admit, when Johnny finally breaks Gilda’s will and she’s groveling at his feet I was hig 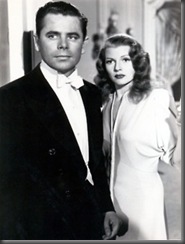 hly satisfied.  And, then that trite ending…

I never really found Ford all that good-looking in other films, but he is full of sexual magnetism in Gilda. I’m sure it helps that he was playing opposite one of Hollywood’s greatest sexpots ever in Hayworth, but that does not diminish the fact that I can’t recall ever seeing Ford look so good—both in his appearance and in his acting.  There’s a particular scene in the film where he gives Gilda a good slap that I found exhilarating. Of course, this could be due to my extreme dislike of Gilda.

If the role of the femme fatale was made for anyone it was Hayworth.  We first meet her character when Ballin asks Gilda if she’s decent (clothed) and Hayworth does her now infamous hair flip and we know that that question, however posed, should always be answered unequivocally no. Unquestionably, she’s beautiful 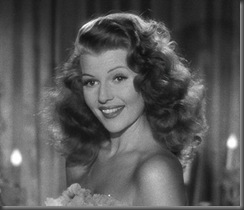 and sexy, but she is also cheap and petty.  Jean Louis designed Hayworth’s gowns to play on her curves and raw sexuality, but they also befit a woman of ill-repute as well. I noticed that Gilda always seems at her worse when she’s wearing some shimmering, beaded outfit.  Of course, exception must be made in the striptease scene, where she’s wearing a black gown and elbow-length gloves—I think the striptease was enough to convey her character’s cheapness.  We get to see her do a few musical numbers, where she dances provocatively and exhibits, what one can only assume is, her burlesque training. I hated Gilda, and so for that reason alone, I have to give kudos to Hayworth.  When you play your character so reprehensibly that even at the end of the film 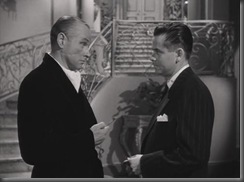 I still hate her (even after Vidor attempts to rehabilitate her), you’ve done a good job.

Now, to appreciate Macready’s Ballin, disbelief must be suspended.  Screenwriters Jo Eisinger and Marion Parsonnet were obviously still effected by WWII propaganda when they concocted Ballin’s backstory about a tungsten cartel ruling the world (if this is so, we have another reason to fear the Chinese).  Once you get around the outrageousness of this plot development, you can enjoy watching Macready delve into his character’s borderline psychosis of jealousy.  Still, I never really believed he was insane (as Gilda liked to claim) until the end of the film when h 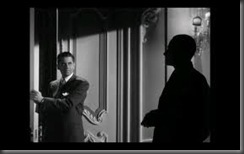 e came back to wreak revenge on his harlot wife.  Really, she wasn’t worth it.

Maté’s cinematography adeptly plays on the mood of the story. When a character is thinking dark thoughts (which happens a lot),  Maté employs backlighting and shoots primarily from lower angles.  In scenes where characters are emotionally distant with one another, or one is trying to lure the other to whatever response they want, Maté shoots one half of the frame

much darker than the other, and usually in long, full shots in rooms with an inordinate amount of space.  As noirs go, Gilda is stylistically right on.

Finally, the other thing that stands out to me is the film’s m 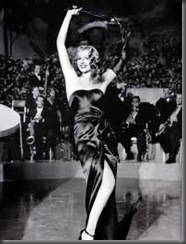 usic.  When you begin your film with “Amado Mio” playing over the credits you are making a statement. Yes, it’s a love song, but it’s one of those creepy, obsessive ones. When Hayworth does her own rendition (not really, as Anita Ellis dubbed it) it is at a time when Gilda is nearing her breaking point.  And, the way that they used “Put the Blame on Mame” was ingenious.  The first time Gilda sings it (again Ellis) she’s in a position of power and it is a restrained performance.  But when she sings it near the end of the film, in the would-be striptease number, it is a hot-mess of uncontrollable emotional spite.  I think Vidor should be lauded for this clever reversal of fortune and power.  If he had only ended the film after Johnny slaps that crap out of Gilda for this burlesque act things would have been just peachy.