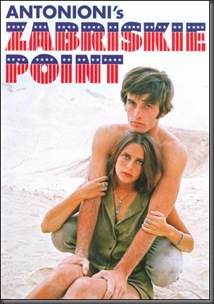 This film was obviously aimed at 1960s LSD addicts, as they are the only ones who could understand what the hell director Michelangelo Antonioni was trying to say with Zabriskie Point (1970).  Lets look at some of the bands whose music is played in it: Pink Floyd, the Kaleidoscope, and the Grateful Dead.  Need I say more? The movie bombed at the box office, but has become a cult classic over the years. This is yet another sign that this is a movie aimed at deadheads. Oh, yes, I know Antonioni is making a statement about the 1960s counterculture movement and American consumer 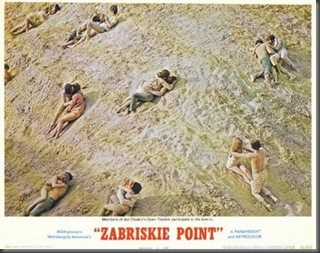 ism, so please don’t go ballistic on that point.  It’s just bad on so many levels—not even the spectacular work of cinematographer Alfio Contini can save it.

For those of you who don’t know, Zabriskie Point is an actual place in Death Valley National Park.  Just as Dennis Hopper desecrated St. Louis Cemetery in Easy Rider (1969) with lewd sexual acts, Antonioni delivers a psychedelic and graphic sex scene that involves group sex and goes on for what seems like half the movie.  I get that people like to go to Zabriskie Point and drop acid and/or take peyote, but who’d really want to have sex there? It’s hotter than hell and is composed of various sediments—namely borax.  And, they didn’t even have a blanket!

Okay, I’ve gone off on a tangent and forgotten to tell you who is actually having sex.  Mark (Mark Frechette) is a college dropout and carpenter who is involved in the counterculture movement on an unnamed college campus in Los Angeles.  Daria (Daria Halprin) is the secretary and girlfriend of a man (Rod Taylor) building a subdivision somewhere near Phoenix.  The 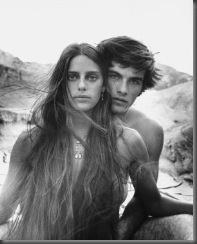 y meet after Mark steals a single-engine plane and takes it for a joyride over the desert.  It is never explained how Mark knows how to fly or why Daria would think it’s a good idea to give a ride to a complete stranger whom she meets in the desert. Approximately an hour after meeting they are having sex at Zabriskie Point. Not too much longer after this Mark flies the plane back to LA and is shot to death by the police, and Daria imagines that her boyfriend’s awesome house in the desert explodes.  Really, that’s what happens.

There’s a reason you’ve never heard of Frechette or Halprin: they were horrible actors.  Frechette was a hippie who gave all his money to a commune and then ended up in jail after he robbed a bank (he died in jail in a bizarre weightlifting accident). For her part, Halprin made one more film after Zabriskie Point and then married Dennis Hopper (perhaps they shared a sense of depravity?).  Why would Antonioni cast them, you ask? They were attractive—sort of the American versions of Monica Vitti and Gabriele Ferzetti, but with a lot less talent.

The only thing this film has going for it is its cinematography.  I can only imagine what Contini thought when he saw all of his fantastic widescreen shots set to horrible American music and ruined by the wooden acting of the

leads.  Even the apocalyptic ending sequence, which sees multiple views of the exploding house, is somehow corrupted by whatever anti-consumerism/capitalism statement that Antonioni is trying to make. Plus, the house he blew up was awesome—what a complete waste, especially for a film like Zabriskie Point.