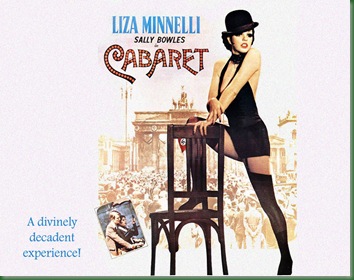 As a child I was mesmerized by Judy Garland in The Wizard of Oz (1939).  Perhaps it was Dorothy’s childlike innocence and sweet voice that made me love that film so much.  The same cannot be said for Garland’s daughter Liza Minnelli’s Oscar-winning effort in Cabaret (1972), in which she plays a character who definitely doesn’t sing sweetly and is far from innocent.  Just let me say it: I have never enjoyed watching director’s Bob Fosse’s Cabaret—mainly because I don’t like Minnelli. 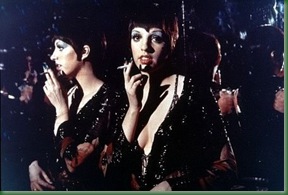 Throughout her career Minnelli has played frantic, nervous women who seem on the verge of mental collapse. As such, I feel like she’s playing the same character over and over—herself! Now, I’m not saying that she didn’t deserve the Oscar she won for her portrayal of Sally Bowles—the competition was rather weak that year, sans Maggie Smith—but there’s a reason her film career went in the toilet after the Arthur movies: lack of range.  What works on Broadway doesn’t always translate to the big screen—just ask Nathan Lane and Carol Channing.  With that said, let us now discuss the film that unjustly won Fosse a Best Director Oscar over Francis Ford Coppola (yet another gripe I have with this movie).

The story takes place in 1931 Berlin, during the waning years of the Weimar Republic. With Nazism on the rise and the Depression in full swing, we find our story set in a seedy cabaret and in the rooms of a rundown boarding house.  Sally Bowles (Minnelli) is a performer at the Kit Kat Club, but wants to be a movie star. In between sidling up to customers with deep pockets she looks for a chance meeting with G.W. Pabst or Emil Jannings.  While she might not encounter any German film luminaires, she does come 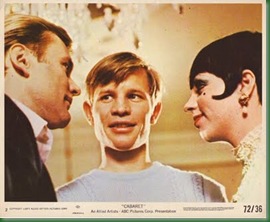 across bi-sexual Brit Brian Roberts (Michael York), who has just arrived in town to tutor Germans on the art of the English language. After convincing him that he must stay at the boarding house where she resides, Sally does her best to turn Brian into a heterosexual. This effort is complicated when rich aristocrat Max (Helmut Griem) comes into their lives. Both Sally and Brian become romantically involved with Fritz; thus, creating one of the strangest love triangles in film. The plot becomes further complicated when Sally become pregnant—who is the Baby Daddy? Who cares…

I never read Christopher Isherwood’s 1951 play, I Am a Camera, so I don’t know how prevalent the rise of Nazism was in it.  For me, there is an odd disconnect in how Fosse brings Nazism in and out of his story. There is the subplot 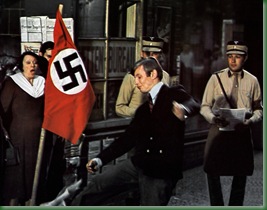 romance between Fritz (Fritz Wepper) and Natalia (Marisa Berenson), where he is afraid to admit he is a Jew but must to marry the woman he loves, and we see a few people get beat up by Brown Shirts, but I don’t know that I agree with how Fosse inserted these elements into the overall film.  They often seem like afterthoughts, or worse, social conscience plot contrivances.

The only thing that I mildly enjoy about Cabaret are the musical numbers—and even those are less than one would like.  Joel Grey won a Best Supporting Actor Oscar for his role as the master of ceremonies at the Kit Kat Club. He performs in almost all of the crass musical numbers, and serves as some omnipresent third eye in the Brian/Sally/Max saga 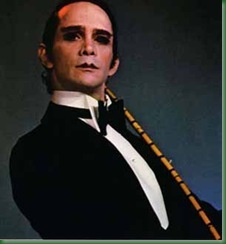 and the rise of the Nazis. Most of the songs satirize the Nazis—hence, why some warned Cabaret might turn out to be Fosse’s Springtime for Hitler—and are smartly composed.  Still, when I watch a musical I want to be wowed by memorable lyrics and/or spectacular dance numbers.  Other than Minnelli’s final rendition of “Cabaret” I can find no song that I remotely found stayed with me after a few hours of seeing and hearing it.  Sure, Rolf Zehetbauer, Jurgen Kiebach, and Herbert Strabel do wonderful jobs with the film’s art direction (they won Oscars), but atmosphere alone does not make me love a musical number.

I expect many disagree with my assessment of Cabaret. Okay. For me, it is a mildly entertaining period musical.  While it might have superior artistic merit when you compare it to that other 1970s musical, Grease (1978), it is far less enjoyable to watch.  Heck, I enjoyed Fosse’s All That Jazz (1979) more than this—and that wasn’t a particular favorite, either.  Perhaps that’s it: I just don’t get Fosse. And, when you couple this cognitive defect with my overall dislike of Minnelli, you get a less than resounding review of a film that so many people seem to admire.