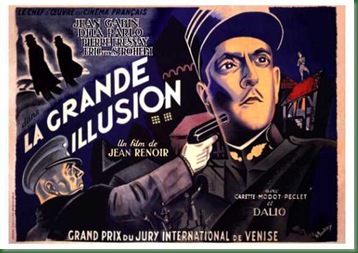 Director Jean Renoir’s Grand Illusion (1937) has the distinct honor of being the first foreign-language film nominated for a Best Picture Oscar.  What sets it apart from other war movies about WWI is that there is not a battle to be seen. Instead, it examines the social-psychological world of POW camps—where battlefield enemies become friends, and religion and class take a backseat to survival.  In an outside world composed of chaos and depravity, the prisoners and jailers of the POW camp engage in a concocted world of grand illusion. At its core Grand Illusion is a humanistic film about social class, religion, and duty/honor. 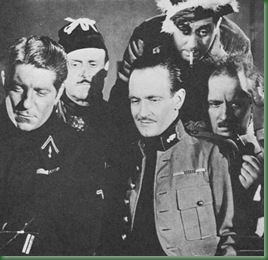 When Lieutenant Maréchal (Jean Gabin) and Captain de Boeldieu (Pierre Fresnay) are shot down over German territory they become the dinner guests of Captain von Rauffenstein (Erich von Stroheim), the same man who was responsible for their plane going down. As officers, they are treated as honored guests and not enemy combatants—this is von Rauffenstein’s code of honor.  When the Frenchmen are transported to the first of several camps (they like to attempt escapes), they become members of a microcosm of French society. Officers from all walks of life and social class are roomed together—the only things that unite them are their language and nation.  For Renoir, that is enough.

In a European society plagued by blatant anti-Semitism, it is remarkable that Renoir would make one of his principal characters Jewish.  Lieutenant Ros 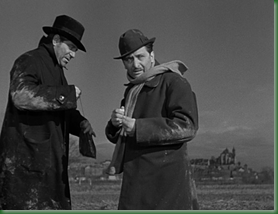 enthal (Marcel Dalio) serves a dual purpose for Renoir. First, Rosenthal is used as the key humanistic figure in Grand Illusion. He is from a wealthy banking family, but he has no pretensions when it comes to his family’s status or riches.  When he receives care packages from home he more than willingly shares his items with everyone. Which goes to the second purpose that Rosenthal serves in the story: an ardent rebuff of Jewish stereotypes and a response to the rabid anti-Semitism taking place in 1937 Nazi Germany (one of the many reasons it was banned there). 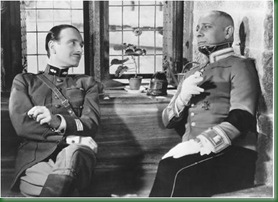 Of all of the relationships in the movie Captain von Rauffenstein and Captain de Boeldieu’s is the most compelling.  For those who do not know, when you see a ‘von’ or a ‘de’ in front of someone’s last name it almost always indicates aristocratic lineage.  Both men are from proud aristocratic families, where men willingly devote their lives to military careers.  They come from a world that above all else complies with duty and honor. To outsiders their behavior might seem haughty and affected, but they know no other way to behave.  Manners and respect must be shown at all times—even to those who are labeled enemies on the battlefield and those who do not belong to their own social class.

The conversations between Rauffenstein and Boeldieu are riveting to watch. These men know that when the illusory polite world of the POW camp ends at the close of the war, so will their refined, aristocratic world. Rauffenstein himself can 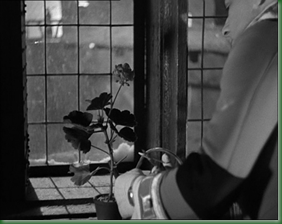 see this when a common man like Maréchal and a Jew like Rosenthal are recognized as officers just like he and Boeldieu.  Surrounded by those so unlike themselves they seek comfort in one another, which makes Boeldieu’s extreme sacrifice for Rosenthal and Maréchal all the more painful for Rauffenstein. When Renoir has Rauffenstein cut his prized geranium after Boeldieu dies it says more than ten pages of dialogue could ever express.  Just as Citizen Kane (1941) had its Rosebud, Grand Illusion has its geranium.

Stylistically there isn’t an extreme amount to focus on, but that doesn’t take away from the film. Christian Matras cinematography is not what I would describe as breathtaking and there isn’t an overabundance of complex lighting, either.  Still, he employs close-ups to their greatest effect and cleanly comprises his frames.  And, Joseph Kosma’s score does a nice job of setting the melancholic feel of the film.

Overall, what I most admire about Grand Illusion is the story and the acting. Never before was von Stroheim’s stilted and mannered acting style more called for than in the role of Rauffenstein—for that alone, Renoir should be lauded.  If I have one complaint with the film it is that it goes on about 20-minutes too long.  For me, the movie could have ended after Boeldieu’s death and a closing shot of Rosenthal and Maréchal crossing the Swiss border.  Still, I expect that Renoir was trying to make a statement about the universalism of compassion and love, and so he needed to show that a German woman (Dita Parlo) could give shelter to and eventually fall in love with a Frenchman.  C'est la vie…