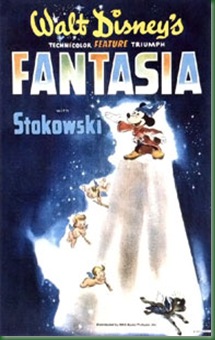 Mushrooms, fairy dust, nudity, intoxication, murder, witchcraft, and satanism are not words that pop to mind when someone mentions Walt Disney.  Yet, all of these elements appear in Disney’s Fantasia (1940). Ah, but there’s more—it’s an experimental, stereophonic movie, too.  I can’t imagine that many children (then and now) are pleased to learn that Mickey Mouse is only in the film for a few minutes and then the rest is music, music, music—and, worse yet, classical music!  Thankfully, I am not a child, and so I have a slight fondness for this revolutionary piece of cinema.

Ben Sharpsteen was the supervising director of this massive project. He worked with ten others directors and over sixty animators, not to mention c 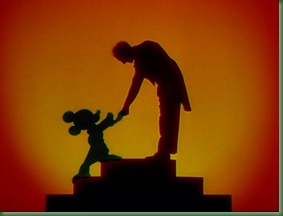 onductor Leopold Stokowski and the Philadelphia Orchestra, to create a film so unlike anything the movie-going public had ever seen that some didn’t know how to react.  Pauline Kael called it “grotesquely kitschy”, while Bosley Crowther observed that “Fantasia dumps conventional formulas overboard and reveals the scope of films for imaginative excursion”. I can see both Kael and Crowther’s points, but I tend to side more with Crowther.  For me, Fantasia is an artistic visual interpretation of the power of classical music.

The film is broken into eight segments, each set to a specific classical music piece.  While I could have done without Deems Taylor as the master of ceremonies, I know that some viewers needed his introductory comments.  Plus, some of the background information he provided was somewhat interesting. 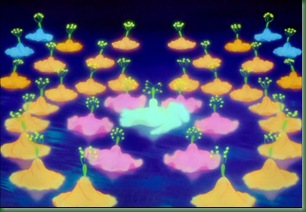 The first section of the film is set to Bach’s Toccata and Fugue in D Minor and is perhaps the most abstract of the eight segments.  I don’t know if I would have started off like this, as it might have been too disorienting for some. Still, I love this piece of music and I enjoyed it being used in such an unusual way.  The second part is a reinterpretation of Tchaikovsky’s Nutcracker Suite, with an emphasis on the changing of the seasons. On display are such things as fairy dust and dancing mushrooms—friends of hallucinogens rejoice!  I find these two sections delightful and a nice way to begin the program. 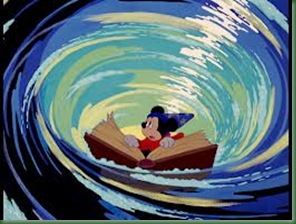 doesn’t have the same power as the works of the other composers featured. The final section before the intermission is my least favorite. Stravinsky’s Rite of Spring is used to exhibit the earth’s creation and the early life forms that evolved from it.  I expect this was the most controversial part of the movie—saying the earth was billions of years old and that something crawled up out of the sea could be a problem for Bible literalists.  What I don’t particularly like about it is I don’t think the music fits the images presented.  For me, these are the two weakest sections of Fantasia.

The intermission serves as the fifth segment, but it really isn’t anything more than a quick music tutorial about what instrument sounds like what.  The sixth section is usually the most divisive.  Set to Beethoven’s Pastoral Symphony, it takes place on Mount Olympus 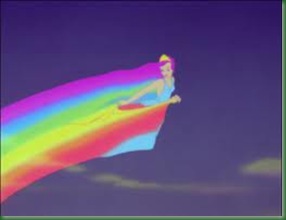 and we see colorful mythological creatures cavorting with one another.  I expect this is where Kael found the adjective ‘kitschy’, and, it is, but it is also a fun interpretation of Beethoven’s work.  I am especially fond of the Iris section and the covering of night section.  Ponchielli’s Dance of the Hours is perhaps the most well regarded part of Fantasia. Hippos in tutus paired with vampire-esque alligators are inspired choices for a retelling of an Inquisition-based ballet.

Yet, of all of the sections of the film, the last is my favorite.  I love dark Russian composers and I think Modest Mussorgsky is one of the best. His Night on Bald Mountain is both hypnotically eerie and thrillingly exciting, and when paired with Schubert’s Ave Marie, a wonderful dichotomy of the sacred and the profane is expressed. Many viewers have said this part of the film is the one that stays with them the 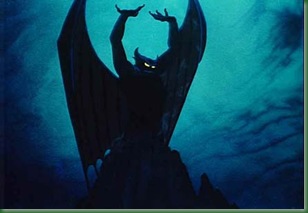 longest—some because it gave them nightmares! For me, I always play Night on Bald Mountain at my Halloween celebration because it is the perfect choice for the night of lost souls.  The animation fits splendidly with Mussorgsky’s music.

Overall, I enjoy watching Fantasia. The film is uneven at times, but that is to be expected when so many directors are involved.  What makes this movie special is its artistry and  innovation.  However, this is not a film that everyone will enjoy—most notably children and adults with short attention spans.