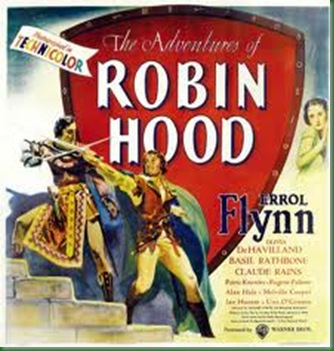 Prior to 1938 Warner Brothers Studios didn’t make big-budget films. They were known for their low-budget gangster films and weepies.  All of this changed when they gave The Adventures of Robin Hood (1938) a $2 million budget and made the big leap to Technicolor.  Luckily, they made $4 million at the box office; unfortunately, I found their use of Technicolor to be an assault on good taste.

Carl Jules Weyl won an Academy Award for Best Art Direction for his castle and forest creations, and a well-designed archery contest. Who am I to argue with the Academy? Perhaps they have higher sensory perception than me, because it was especially difficult for me to enjoy Weyl’s set designs when I was optically defiled 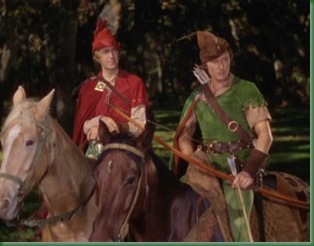 by Milo Anderson’s costume designs.  There, I said it—the costumes are beyond horrible.  I expect that someone at Warner Bros. told Anderson that they were spending a helluva lot of money on Technicolor and that he’d better make one damn colorful film.  This is the only legitimate reason I will accept as to why he chose to dress grown, virile men in bright greens, reds, and yellows.  There are many reasons the historical period this story takes place in is called the Dark Ages!

The Robin Hood story is well known.  While King Richard the Lionheart (Ian Hunter) is off fighting the ‘infidels’ in the Crusades his debased younger brother Prince John (Claude Rains) engages in such nefarious acts as over-taxation and murder.  John favors the 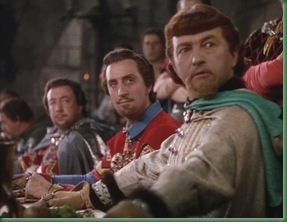 Normans and persecutes the Saxons (no history lesson will be provided as to why).  Along with his henchmen, the Sherriff of Nottingham (Melville Cooper) and Sir Guy of Gisbourne (Basil Rathbone), the Prince plans to usurp the throne and decimate all those who stand in his way—notably Robin Hood (Errol Flynn) and his band of merrymen, who are ensconced in Sherwood Forest.  As a result, arrows fly and swords clash, and the fate of England rests in the hands of men wearing tights and extremely bright colors.

It is the fight scenes that set this film apart. Relying on an enormous cast of extras, directors Michael Curtiz and William Keighley do an excellent job of staging their action sequences.  The story moves at a whirlwind pace, which is expertly managed by Ralph Dawson’s Academy Award winning editing.  Who doesn’t 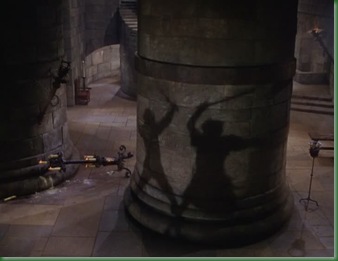 like watching Flynn shooting arrows at his enemies while riding on horseback or trying to avoid capture inside Nottingham Castle?  Of course, with any film where Flynn and Rathbone are sworn enemies there must be a swordfight—and this does not disappoint.  The most spectacular shot in the entire movie takes place when they finally cross swords along the stairways of Nottingham Castle. Interestingly enough, what makes the shot so great is that it is done in shadow (with neither men colorfully displayed for all to see)—just black shadowed images!

Oh, and there’s a love story!  The King’s ward, Maid Marian (Olivia de Havilland), comes off haughty in the beginning, but Robin Hood in his gleaming green glory eventually turns her head (HOW couldn’t she notice him?).  Thankfully, de Havilland doesn’t look nearly as bad as her male counterparts in Technicolor. Still, there was a point when I began wondering if 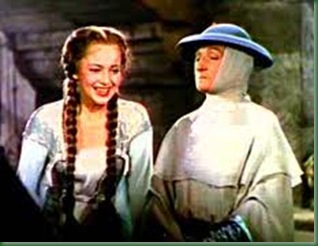 we’d ever see her without a veil.  Fortunately, we do eventually get to see that she has hair!  Her wardrobe, however, leaves one to wonder if tapestry was for more than walls in the 12th Century?  Her scenes are wonderfully complemented anytime Una O’Connor makes an appearance as her nurse Bess. For my money, O’Connor is one of the best things about the entire movie.

Overall, I was not overly impressed with The Adventures of Robin Hood. It was a passable adventure story, with some nicely staged action sequences.  The story itself was not especially compelling; and, the acting could not be classified as nuanced (which is a shame because there were some pretty good performers in it).  And, the garish use of color to extol the virtues of Technicolor was jarring to every optic nerve I have.