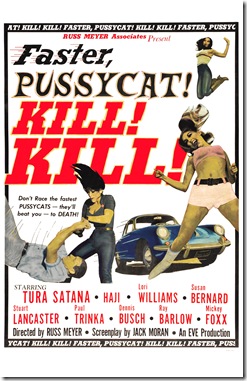 Where should I start: the ridiculous script, the bad acting, or the complete exploitation of women?  Director Russ Meyer’s cult film, Faster, Pussycat! Kill! Kill! (1965), is an adventure in everything that I despise in a film.  That said, it is not a horrible movie—it just really pisses me off.

The ridiculous story, penned by Meyer and Jack Moran, is about three go-go dancers who like to wear extremely tight and low-cut clothing and driv 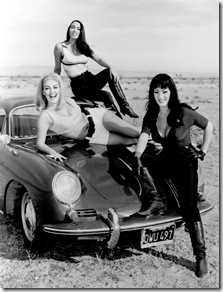 e around the Mojave Desert in small sports cars laughing maniacally. The leader is Varla (Tura Santana), a karate chopping psychopath.  Her main sidekick is Rosie (Haji), a lipstick lesbian who I couldn’t figure out whether she was supposed to be Mexican or Italian.  The weak link in this sinister triangle, is Billie, an oversexed blonde who is constantly disobeying orders.  When they meet up with Tommy (Ray Barlow) and his girlfriend Linda (Susan Bernard) in the desert, things go too far and Varla ends up snapping Tommy’s neck.  Why in the hell they didn’t snap the beyond annoying Linda’s neck is beyond me, but for some reason they take her along on their next adventure—trying to rob an old crippled rancher. 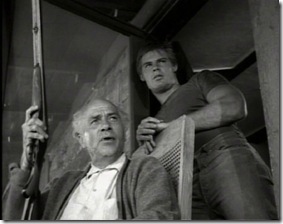 r in Faster, Pussycat! Kill! Kill!—they were all horrible actors.  I’m sure Meyer was trying to create cartoonish characters when he put this movie together, but at some point it just passes the point of kitsch.  Of particular grievance is Stuart Lancaster as the lecherous crippled old man and his aptly named son The Vegetable (Dennis Busch). Watching these two attempt to deliver their inane lines went beyond the pale.

But the absolute worst thing about Faster, Pussycat! Kill! Kill! was the complete exploitation of the female form.  The film begins with the three women dancing in a go-go club with beyond disgusting men urging them on, and it only gets worse from that point on.  I am not exaggerating when I say I kept waiting for one of Varla’s nipples to appear out of the front of her low-cut shirt—you see everything 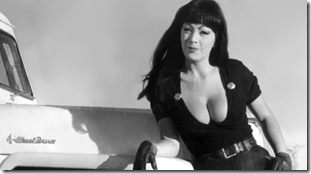 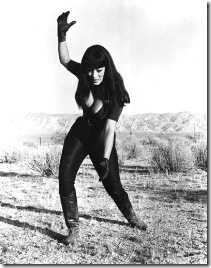 All that said, I can’t rate Faster, Pussycat! Kill! Kill! as one of the worst films that I have ever seen.  It is an area of movie limbo for me.  It was bad on all levels, but still somewhat watchable. I expect this has to do with the fact that there is some semblance of a plot and that the characters are just so outrageous that you can’t help but watch.

Overall, I definitely would not rank this as one of the films I had to see before my death.  Everything about it is bad—yet, somehow still watchable. And, the theme song by The Bostweeds is pretty memorable.