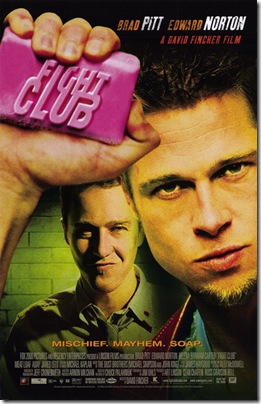 (I’m pretty sure there are spoilers in this post.)

Since that wouldn’t be a very constructive blog post, I suppose I must talk about director David Fincher’s highly creative and unusual movie, which was adapted from the 1996 Chuck Palahniuk novel of the same name.  Edward Norton plays an unhappy white-collar worker who suffers from insomnia 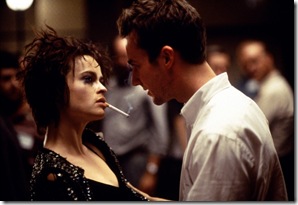 and consumerism. His entire life is focused on having a condo completely decorated in IKEA and covering up safety defects for the automobile company for whom he works.  He can only feel anything when he goes to disease support groups—even though he doesn’t suffer from any physical affliction.  When the disaffected Marla Singer (Helena Bonham Carter) starts attending the same meetings (even one for testicular cancer), Norton’s character relapses and returns to his insomniac ways.  Marla and Norton’s characters are emotional wastelands, who both despise and commiserate with one another.

And, then there’s Tyler Durden (Brad Pitt).  Tyler is a sociopath who is one part philosopher and three parts madman.  Tyler and Norton’s characters meet on a plane and begin living with one another after Norton’s apartment explodes.  They live in a 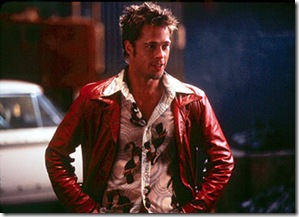 cesspool of a dilapidated house and start an underground fight club.  Tyler uses the club to recruit men to his Project Mayhem, which consists of making bombs with chemicals used in soap and then planting them in credit card buildings.  Eventually, Norton’s character realizes how insane Tyler is and tries to stop him, and this is when the film really gets interesting.

Make no mistake, Fight Club is a graphically violent film. Watching people have their faces beaten to pulps is not a pleasant experience.  There is lots and lots of blood and the occasional skull blown out by a bullet hole.  If you have a weak stomach, this is not the movie for you, because the fight scenes are quite realistic and the blood looks like blood.

Fincher and cinematographer Jeff Cronenweth used Super 35 to film Fight Club. It gave the movie and unusual look, which played well against the fact that most of the scenes were filmed at night.  It is a gritty looking movie, which on a second viewing has so much to offer.  Why on a second viewing, you ask? Well, I’ll tell you, but this is where the spoiler comes into play—and it’s a BIG one.

Tyler Durden and Norton’s character are the

same person.  Yeah, it was sort of like The Sixth Sense (1999) when you realize that Norton’s character has created an imaginary persona to release him from his unhappy life and to launch him into a world of chaos.  As such, when you watch Fight Club for a second time you pick up on all of Fincher’s inserted visual clues. Those odd flashing splices that you couldn’t totally make out before Tyler enters the film—that was Norton’s subconscious beginning to insert Tyler into the frame.  Why does the screen sort of shimmer when Pitt is in a scene (yes, he’s hot, but so is Helena Bonham Carter in a dark, weird way)?  It’s Norton’s mind.  Why are all the un-Tyler scenes flat and somewhat bland—this is Norton’s reality.  It is a highly inventive way to present two different cognitive states.

The acting is good, but not great.  Bonham Carter is a particular favorite of mine, so just about anything she does is fine by me.  Her Marla is flippant and morose at the same time.  Norton and Pitt play extremely well off one another—as they know they 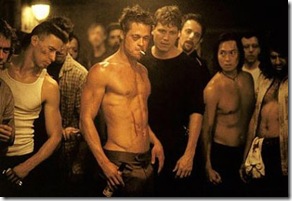 are playing two different sides to one man.  There is a psychotic twinkle in Pitt’s eye throughout. And, it is a delight to watch Norton transform his character from a boring pencil pusher to an all-out badass.  My favorite scene comes when he blackmails his boss into paying him to work from home. In it, you see the complete disintegration of Norton’s character.

Overall, I liked Fight Club. Still, the story is a bit far-fetched and the film is way too gratuitously violent for my liking.