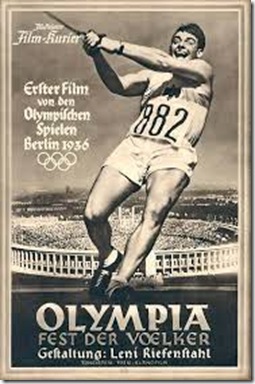 There is no doubt that director/producer Leni Riefenstahl was a tool of Hitler’s Nazi regime.  Yet, that does not negate the fact that her two-part documentary of the 1936 Olympic games held in Berlin, Germany, Olympia, “Festival of the Nations” and “Festival of Beauty” (1938), is a monumental cinematic spectacle.  She employed technical elements never seen before—extreme close-ups, tracking shots, and highly inventive camera angles—which were later used by the likes of Orson Welles and Carol Reed. That said, the overall tone of the film is still hindered by Nazi propaganda and racism.

Part One, “Festival of the Nations”, opens rather ostentatiously, with Riefenstahl directly comparing German athletes to Greek gods.  This lends itself to the idea of the superiority of the Aryan race, so this isn’t a good way to endear your movie to viewers familiar with the vile tenets of Nazism and Hitler’s Mein Kampf. And, I suspect the all-but-naked (and in some cases, really naked) human specimens were a bit racy for 1938.  Anyway, unlike the last

few Olympics, with their 10-hour opening ceremonies, Olympia just has a parade of nations.  Still, from a historical perspective the viewer gains keen insight into which countries were allies (or unwilling ones, too) of Hitler in 1936 by whether they give the Nazi salute or not. Thankfully, the American athletes do not.

After the mini-geopolitical lesson has commenced, we then move to the track and field games.  Again, even though it would have been much better if at least one of the 100,000 spectators in the stadium had aimed a bullet Hitler’s way and saved countless lives, the film is of historical importance because we get to see one of the 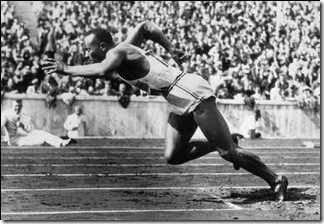 greatest athletes ever, Jesse Owens, dominate every event he participated in by winning four gold medals.  Racial superiority took a slap in the face when that Ohio State Buckeye visited Berlin.  I watched the German version, so it was easy to tell when the announcer was miffed that both Germans and the entire white race kept losing to a black man.

Anyway, all blatant bias aside, Riefenstahl and her crew of hundreds do an excellent job of capturing the athletic prowess of the track and field competitors.  Watching in slow motion bodies contort in feats of strength and speed allows one to gain an appreciation of just how much skill goes into being a top-tier athlete.  My one complaint, which really shouldn’t be one since she was doing revolutionary things, is that I can hear the ticking of the film spool/speed whenever the camera slows down.

Part Two, “Festival of Beauty” oddly enough starts with naked German men in a bath house scrubbing each other’s backs and laying back in 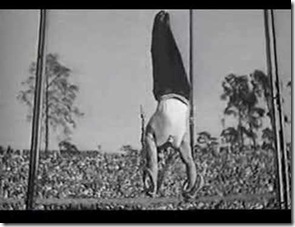 ecstasy as the steam washes over them. For such a homophobic nation, this seems like a less than Nazi way to begin the second part of your documentary.  That said, this section of the film focuses on gymnastics, regatta, swimming, diving, and military sport—although the Pentathlon makes its way into this, too. Why it wasn’t in the first part with the other track and field events is a mystery to me.

While it focuses more on the aesthetic effects of sport, “Festival of Beauty” is also a showcase of athleticism.  I could have done without the Eventing section, with horses being hurtled over extremely perilous ravines and obstacles.  With each 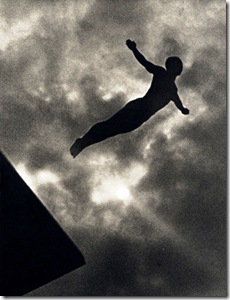 passing fall and unseating of uniformed rider, I became convinced that at any moment one of the officers was going to whip out a pistol and put down a horse.  However, in complete opposite of this inhumane brutality, was the diving section of the film.  This is a thing of beauty to watch, as Riefenstahl made the divers appear as though they were flying through the air.

Overall, Olympia is probably the greatest documentary about the Olympic games ever made.  It is unfortunate that there has to be an undercurrent of Nazism and racism running throughout it, though.  And while it is a visual treat, its 3+ hour runtime can be daunting to the casual sports enthusiast.