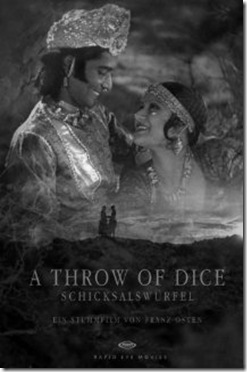 Director Franz Osten’s A Throw of Dice (1929) is rather unique, in that it was filmed entirely in India and used Indian actors but it is still considered a German production. If I were judging the film strictly by its production scale, it would be a homerun.  With a cast of thousands, set amongst the vast Indian countryside and housed in beautiful palaces along the Ganges River, A Throw of Dice is on the same scale as D.W. Griffith’s Intolerance (1916).  However, I don’t judge a movie solely on the magnitude of its cast or set design.  While these things are definitely important, I also need to be enthralled by the story.  Alas, this is where A Throw of Dice falls short for me.

Based on an episode from The Mahabharata, the story centers around two Indian kings (but I expect they were really Rajas) in love with the same woman.  Sohan (Himansu Rai) is an evil king, who plots to kill 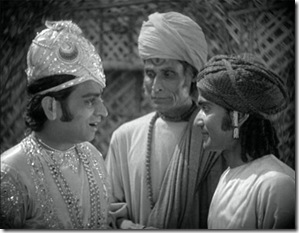 his cousin and rival king, Ranjit (Charu Roy), by having his henchman/flunky shoot Ranjit with a poisonous arrow on a hunting trip.  Unfortunately for Sohan, there is healer nearby who saves Ranjit’s life.  As if things weren’t bad enough between the two kings, they both fall in love with the healer’s daughter, Sunita (Seeta Devi). When Ranjit wins Sunita’s heart, Sohan plots to unravel their happiness. And, this brings us to the title of this film: A Throw of Dice. Ranjit has a gambling problem that Sohan tries to use in his favor by playing a dice game with loaded dice—things never end well in dice games, just ask Nas.

Okay, let’s start off with what I liked about A Throw of Dice: the film score. Silent films can be difficult to watch, but fortunately the re-mastered 2006 score for A Throw of Dice is pretty darn special.  Nitin Sawhney’s score is both engaging and authentically Indian (although he is British Indian), so it fits perfectly with the film. While you don’t hear many silent scores with lyrics, Sawhney minimally uses vocals, and when he does, it always seems appropriate. 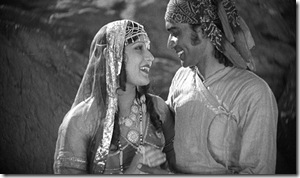 The acting is pretty natural, too.  Histrionics and overacting, pillars of most silent movies, are not really present in A Throw of Dice, except in one scene where the henchman has an exaggerated death scene.  There is no mugging for the camera or overuse of hand gestures or facial muscles. Pretty much everyone in the cast seems at ease with allowing the camera to capture the spirit of each scene.

Still, I was not really that impressed with the overall narrative of A Throw of Dice. I never found myself truly engaged in the story, nor did I particular connect with any of the characters.  I did, however, find Sohan to be an evil bitch, but not enough for me to care one way or another about what 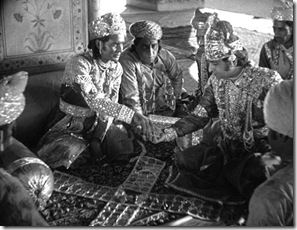 happened to him.  (It puzzles me why Rai would want to play the bad guy in this, as he was one of its producers.) Plus, for an 80-minute movie, the plot moved pretty slowly.  Of course, this could probably be attributed to Osten’s desire to capture the majestic beauty of the Indian countryside more than crafting a truly memorable story.

Overall, A Throw of Dice is aided by a wonderful film score and a unique setting.  That said, I never found myself invested in the plot, nor did I really connect with any of the characters.  While it was great to see tigers, elephants, and palaces, the story never really took hold for me.  Still, it was nice to watch a silent movie with naturalistic acting, and to see what silent Indian cinema looked like.