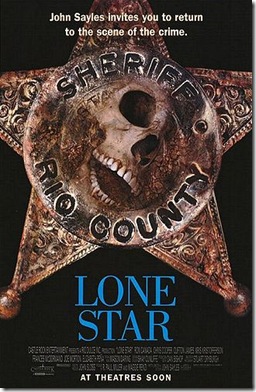 Once I got over the fact that hunky Matthew McConaughey was in director John Sayles’ Lone Star (1996) for less than ten minutes, I came to the conclusion that the interconnected plot and characters are the best thing about the film. Without giving the ending away, which falls somewhere between ICK ICK ICK and is it really ICK?, I have to say I admired how Sayles wrapped the intersecting stories together to create an ambiguous conclusion. That said, Lone Star is somewhat hindered by an overabundance of characters and peripheral stories.

The film starts off with a body, a Masonic ring, and a sheriff's badge being discovered in the desert. Both once belonged to Rio C 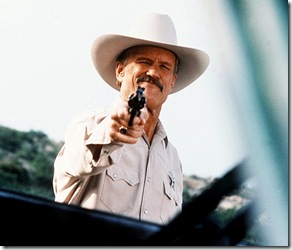 ounty Sheriff Charlie Wade (Kris Kristofferson)—a racist, corrupt, evil son of a bitch who liked to shoot people in the back if he didn’t get a cut of whatever they were doing. For more than forty years the racially diverse Texas border town thought they were free of his reign of terror, but now Sheriff Wade is back for his last payoff.

For Sherriff Sam Deeds (Chris Cooper) the number one suspect is his father and former sheriff, Buddy Deeds (McConaughey).  Sam had a difficult relationship with his father—mainly because he ended his son’s teenage romance with a local Mexican girl named Pilar (Elizabeth Pena)—but, by all other accounts, the residents of Rio County loved Sheriff Buddy. 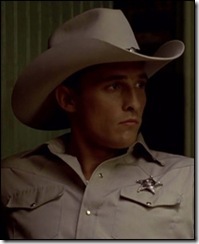 Yes, Sheriff Buddy used his position to get building contracts for his friends and to curry political favors, but he didn’t kill anyone or take money out of anyone’s pockets, either.  As such, when Sheriff Sam tries to put the pieces together as to who killed Sheriff Wade, he meets with some resistance.  In the end, however, the truth about who killed Sheriff Wade comes out in a rather unexpected way—thus, creating an ending that is shocking and Icky.

What Sayles does particularly well is show how segregated Rio County is. He attempts to show how the blacks, Mexicans, and Anglos view their positions in the border town and tie it to the overall plot.  Of particular interest was how established Mexicans like Pilar’s mother, Mercedes (Miriam Colon), viewed “wetbacks”.  Perhaps the funniest thing in the movie happens when she calls Border Patrol to pickup some Mexicans she sees crossing over.

Still, I think Sayles goes a bit overboard with how many 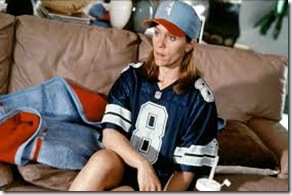 stories he tries to cover.  For example, although I absolutely loved seeing Frances McDormand's Bunny maniacally ramble on about every football team in the state of Texas, this was one of several peripheral elements that could have been cut.  There is also a story about a young female Army soldier who joined the military to escape a crime-ridden section of Houston which could have been easily omitted.

Sayles’ unique use of flashbacks to explain what led to Sheriff Wade’s demise is quite resourceful.  I like how he merged the flashbacks with the present to meld the two time periods together.  Sometimes this technique can be misused which can create confusion, but the way Sayles uses it comes off quite seamlessly.

While I was not wowed by any particular performance, the two standouts would have to be McDormand and Pena. I don’t think it’s possible for McDormand not to shine in whatever she’s in, so it’s not surprising that her one brief scene in the movie is one of the most memorable. However, Pena was a revelation as the sexually pent up Pilar.  It’s too bad that she really hasn’t been given many opportunities to shine since Lone Star.

Overall, I was impressed with how Sayles incorporated the past with the present in Lone Star.  Yet, for me, there are too many peripheral elements which slow down the overall pacing of the film. This ultimately takes a lot of sting out of the Icky and jarring ending.