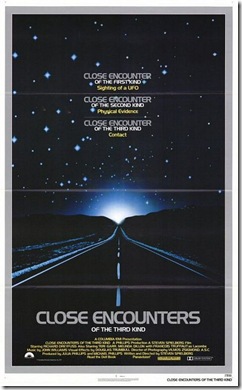 For me, the best thing about writer/director Steven’s Spielberg’s Close Encounters of the Third Kind (1977) is that Francois Truffaut is in it.  Yes, the film is full of (for the time) wonderful special effects and the miniature aliens are inspired, but I’m just not a big fan of science fiction.  When I scan my cinematic memory I can only think of two films from the genre that I really liked: The Empire Strikes Back (1980) and District 9 (2009).  As such, this hampers my appreciation for revered science fiction movies like this and 2001: A Space Odyssey (1968).

Bob Balaban as David Laughlin, Claude Lacombe’s (Truffaut) French interpreter. Perhaps it’s a small thing but Balaban looks and sounds too much like the film’s star, Richard Dreyfuss.  From the very start I was confused—what would a utility man from Muncie, Indiana, be doing in the Sonoran and Gobi Deserts? Yes, I eventually realized they were two separate men and actors, but it just seemed like a poor casting decision to me.

Anyway, the film is about the three different types of encounters that humans can have with aliens.  The first section of the movie deals with the sightings of UFOs that no one wants to report for fear of being labeled a kook. The second encounter is, I suppose, when alien ships hover above you and shine a light bright enough to give you a severe sunburn—thus, creating evidence that you have been touched by an alien.  This happens to Roy Neary (Dreyfuss) and Jillian (Melinda Dillon) and her son, Barry (Cary Guffey).  Well, Barry’s experience is slightly different than the others, because he willingly makes contact (the third encounter) before everyone else.

When he starts joyfully chasing the aliens through the cornfields you think he may not be right in the head, but when you actually see the aliens at the end of the film you realize he probably thought he was running after an image of himself, as he looks suspiciously a lot like them.  I ask you, where was Barry’s father and why was he never mentioned?

While Barry was off gallivanting with the aliens, an image of Devil’s Tower, Wyoming, was being implanted in Roy and Jillian’s minds.  So 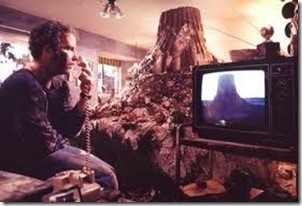 on both are compelled to artistically depict this message—Jillian endlessly sketches and Roy builds first a mashed potatoes and then a clay sculpture of the landform.  Roy’s actions are of particular consequence, as his wife (Teri Garr) and three children leave him after he appears to have become completely unglued.

The man who brings all of the stories together is Lacombe.  Based on a bizarre conversation in Northern India, Lacombe figures out that the aliens communicate via a five-tone musical phrase in a major scale. He then starts explaining this to other scientists using the Zoltan Kodaly 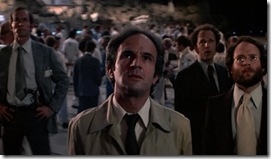 Method—using hand signals to reference musical notes.  With the help of his interpreter and  Dreyfuss lookalike, they figure out that the aliens are sending them longitudinal coordinates that indicate, you guessed it, Devil’s Tower, Wyoming.  What happens next is a music and light show from out of this world—literally.

Let’s forget that I wasn’t that interested in Roy and Jillian compulsion to track down the aliens in Wyoming and focus on what I liked about Close Encounters of the Third Kind. First, Spielberg let Truffaut speak 90% of his lines in French, thus adding some authenticity to an otherwise ridiculous character.  Second, as creepy as the music was, composer John Williams made it memorable. 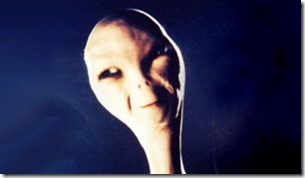 Third, although I don’t drop acid, I can appreciate the work that went into creating first the various UFOs and then the massive mothership. Douglas Trumbull and his special effects crew did an awesome job with the ships, and Carlo Rambaldi’s aliens were creepily cute—I especially liked when one smiled.  Other than that, I wasn’t overly impressed.

My quest to find another science fiction movie that I can admire continues.  Although Close Encounters of the Third Kind is a visually impressive film, it falls short in the area of storytelling and lacks a character that I could really bring myself to either root for or against.  I do like the fact, however, that the aliens were peaceful and not trying to destroy the planet.  Surely that is something.