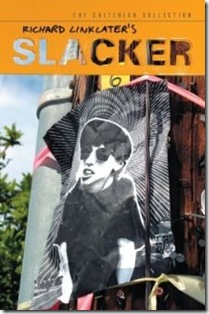 I graduated from high school the year director Richard Linklater’s Slacker (1991) came out.  I unequivocally knew no one who resembled the complete losers who comprise Linklater’s cast.  It makes me sad to think that there were (and are) people in the world who think and behave like this cast of idiots.  Austin, Texas, where the story was filmed and takes place, should have sued Linklater for making anyone who watched his film think that the streets of Austin were filled with pseudo-philosophers, conspiracy nuts, inept criminals, and psychopaths. Slacker is nothing more than a bunch of unconnected losers walking around doing and saying nothing—even if they never stop freaking talking!

I would attempt to tell you what the film is about, but that would be a complete waste of time, as there is no plot.  The “story” starts off with Linkla 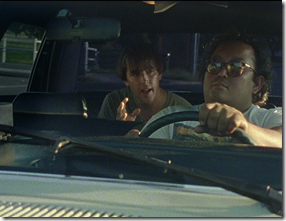 ter himself getting off a bus and hopping in a cab.  During the cab ride he just talks endlessly about alternate realities and the like.  After he emerges from the cab he happens upon an old lady who has been run over and left for dead in the street. He steals her purse and we don’t see him again for the rest of the picture.  And, on and on it goes with a bunch of other random characters jabbering on about whatever peaks the interests of their mentally unstable minds.

There are some really bad diatribes throughout Slacker, but the absolute worst has to be when Teresa Taylor’s character tries to sell people a Madonna pap smear out of 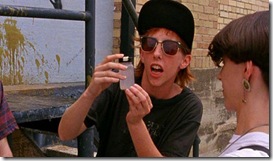 her pocket.  Really?  On the streets of Austin there are people who are peddling items from a Madonna gynecological visit?  Oh, and then there’s the pathological old man who goes for a philosophical walk with the young punk who tried to rob him and his daughter at gunpoint.  Really?

I don’t care how many critics heaped praise on Slacker, or that the National Film Registry selected it for preservation because it was “culturally, historically, or aesthetically significant.”  For me, it was horrible.  Think about it: if these characters were still alive today they would be the meth and heroin addicts breaking into your house, or one of the people who your tax dollars are paying for to be institutionalized, incarcerated, or sitting in Congress. Dreck!