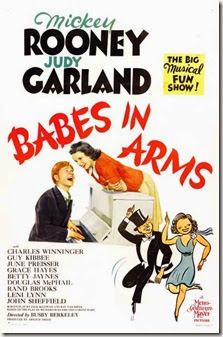 As a fan of the larger than life production numbers that Busby Berkeley choreographed for such films as 42nd Street (1933), Gold Diggers of 1933 (1933), and Footlight Parade (1933), I must admit that I found his Babes in Arms (1939) to be rather pedestrian. Furthermore, if the last scene, “God’s Country”, were cut, I wouldn’t believe Berkley had anything to do with it, sans the fact that he’s credited as the director in the beginning of the movie.  And, how in the world was MGM allowed to say this was based on a Rodgers & Hammerstein musical when almost all of the original Broadway songs were cut and replaced by mediocre melodies?  The only thing that saves Babes in Arms for me is Judy Garland’s beautiful voice—and even that is somewhat tainted when she has to sing with Mickey Rooney and/or Betty Jaynes.

Tough times hit the vaudeville world when the talkies take over at the box office and old troopers like Joe Moran (Charles Winninger) and his wife Florrie (Grace Hayes) find they can’t make a living anymore.  When Joe gets the old-timers together for a revival tour he says they can’t take an 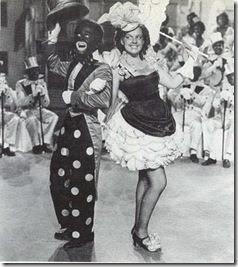 y excess baggage along—this means no kids, even if they are more talented than their “has-been” parents. Foreseeing that things aren’t going to go well for their out-of-touch parents and with the threat of being sent away to a trade school, Mickey (Mickey Rooney) decides that he and the other kids should put on their own show in their hometown.  And, so he writes and produces his own musical—which we never actually get to see, sans one unfortunate number, “Daddy Was a Minstrel Man” in which almost the entire cast performs in blackface.  I won’t spoil the ending, but needless to say it ends like most 1930s musicals—happily, at least for those in the film, perhaps not so much for musical lovers.

While I didn’t really like Babes in Arms, I can’t say that it was a bad film—it just wasn’t very good.  I don’t know if MGM was in a hurry to cash in on how well Judy Garland’s The Wizard of Oz (1939) did at the box office and decided to rush it through post-production or what, but there is a lack of substance to it that just irks me.  I don’t care if it earned two Academy Award nominations (Best Actor, Rooney—really?--and Best Music) and made a boat load of cash—even more than The Wizard of Oz—oh, the inhumanity!—it’s not what I think a top-notch musical should be.  It doesn’t help either that I dislike every musical number except “Good Morning” and “I Cried for You”, both of which Garland primarily performs alone.  Another pet peeve is that I have to listen to Jaynes and Douglas McPhail sing the same song twice, “Where or When”, in the span of five minutes. I could have done 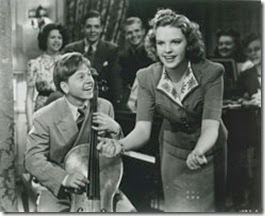 without the first rendition, let alone a back-to-back rehashing of the song, which sounded exactly the same as it did the first time I heard it two minutes earlier!  And, finally, suffice to say, I was not happy to see Garland sing in blackface—even if the song was paying homage to that old vaudeville standard, it still doesn’t leave a pleasant image in my mind—which is how I also feel about seeing Bing Crosby perform“Abraham” in blackface in Holiday Inn (1942). Yes,I know Garland had done this in a previous film, Everybody Sing (1938), but fortunately I’ve never seen that.

Oddly enough, other than the two memorable songs sung by Garland, the most interesting thing about Babes in Arms are the ancillary performances of Guy Kibbee and Margaret Hamilton. Kibbee’s Judge Black’s conversation with Hamilton’s Martha Steele, who’s the head of the Welfare Board, about what is best for the vaudeville children is probably the most interesting dialogue exchange in the entire film. More of them and less of Baby Rosalie (June Preisser) would have done wonders for the movie, I’m sure.

Overall, Babes in Arms is probably the least interesting musical I have watched that appears in the 1001 Movies book. Thankfully, Judy Garland’s voice got me through it.