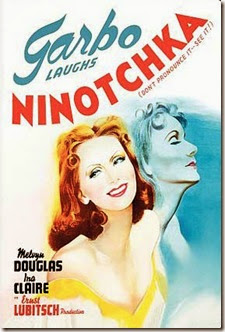 When MGM marketed director Ernst Lubitsch’s political satirical 1939 comedy, Ninotchka, they used the catchphrase, “Garbo laughs”. While Greta Garbo had most assuredly laughed in her previous films, this was her first comedy film and she played her part perfectly.  It helped that screenwriters Billy Wilder, Walter Reisch, Charles Brackett, and Melchior Lengyel’s Oscar-nominated script was tailored made to fit Garbo’s serious on and off-screen persona.  As a result, Ninotchka benefitted immensely from having the perfect script for just the right actress who was supported by an eccentric cast, and who was directed by the only man who could pull it all together. 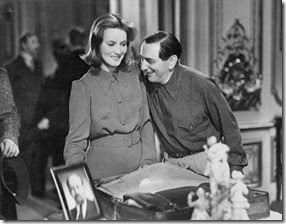 When Lubitsch decided to make Ninotchka he wanted to cast Garbo in the lead but was worried that she might not be able to play the part as he wanted.  As such, he had an interview with her in which after several minutes of anxious, serious small talk he asked her, almost accusingly, “Can you laugh?” Garbo, for her part, was amused by the question and told him she believed she could.  But, Lubitsch pressed on and explained that he didn’t want a small, polite laugh but that he wanted a “wide-open and completely spontaneous laugh”. Garbo said she’d have to think about it for a day.  When she returned the following day she answered Lubitsch by saying, “Your question and the idea--can you laugh is silly. And I love it.”  She then proceeded to laugh quite heartily, as did Lubitsch, and they, of course, ended up making a Oscar-nominated film that showcased probably Garbo’s most rounded performance ever.  Oh, and the conversation also turned into one of the best film marketing campaigns ever.

Most of the story takes place in 1920s Paris, where three Soviet emissaries, Iranov (Sig Ruman), Buljanov (Felix Bressart) and Kopalsky (Alexander Granach) are trying to sell the crown jewels 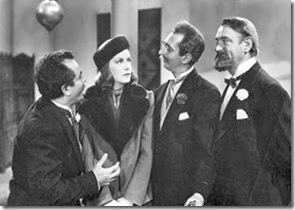 of the Grand Duchess Swana (Ina Claire). The jewelry sale is of great importance to the Soviet people, as it is expected that the year’s crop is going to be quite poor and the money will go toward feeding the nation.  However, the emissaries are beguiled by the luxuries of the Western world and end up being sidetracked by the Duchesses’ smooth-talking lover, Count Leon d’Algout (Melvyn Douglas).  When the pending jewelry sale ends up in the French courts, the Soviet government decides to send in reinforcements in the form of a no-nonsense hard-liner, Nina Ivanovna Yakushova, “Ninotchka” (Garbo).

Of course, it is Ninotchka’s stolid, straight-talking, all-business nature that makes the story as funny as it is.  Her tone is set from the moment she steps off the train and refuses to allow a porter to carry her bags and asks him, “Why should you carry other people’s bags?” To which the porter answers, “Well, that’s by business, Madame.” Her retort, “That’s no business. That’s social injustice.”  His reply, “That depends on the tip.” The audience laughs, but not Ninotchka.  And the story continues on like this for quite some time, with Ninotchka matter-of-factly addressing the bumbling antics of 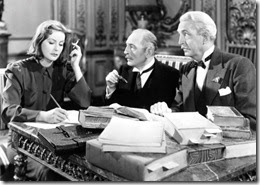 her comrades and finding herself appalled by the consumerism of the Western world: two-thousand francs for a hotel room could buy a cow for the Soviet people; ordering raw beets and carrots in a French restaurant; and, inciting ladies’ room attendants to strike for better wages.  Through it all, Garbo plays her Oscar-nominated part to the hilt, never giving away that she is in on the jokes that the audience is laughing at. Her willingness to allow her true persona to be the butt of the joke is what makes the film so great. In one of her first scenes in the movie, her character is asked, “Do you want to be alone, comrade?”, a direct jab at her infamous line from Grand Hotel (1932) which became synonymous with her on-screen and off-screen personality.

Yet, Ninotchka would have not been quite as good as it is if Garbo’s character didn’t transform a little, and that’s where Douglas’ character comes in.  Even a hard-line Russian girl c 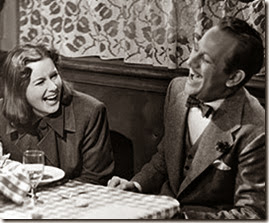 an be sidetracked by a smooth-talking man—even if she constantly one-ups him with classic lines like, “Your general appearance is not distasteful,” and “We don't have men like you in my country. That is why I believe in the future of my country.”  And, yes, he is what finally makes her laugh a “wide-open and completely spontaneous laugh” with his complete ridiculousness.

Still, it’s not the love story that draws you in, it is the personal, though hilarious, transformation of Ninotchka. Through Ninotchka’s true education to the workings of the world and the true nature of communism, Lubitsch is able to show his main character’s growth as well as to expose the idiocy of the Soviet system.  No one did satirical social and/or political comedy better than Lubitsch, and Ninotchka was the perfect vehicle for him to attack Soviet propaganda.  Perhaps 1939 wasn’t the best time to tick off the Soviets, as less than three months prior to the film’s release the Soviets 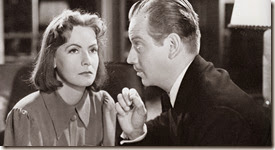 had signed the Non-Aggression Pact with Hitler.  In any case, Lubitsch’s cunning but polite ridicule of the Soviet system is perhaps the best film depiction of communism of its time.  He would, of course, follow this successful political satire up with perhaps his greatest satire, To Be or Not To Be (1942), when he took on the Nazis—you see, he was an equal-opportunity ridiculer.

Overall, I adore Ninotchka.  While I love Garbo drama, I most admire this performance because it is her most-rounded role ever.  Additionally, I’m a sucker for well-done satire, and when it so deftly exposes the true nature of a political party or a historical mindset all the better.