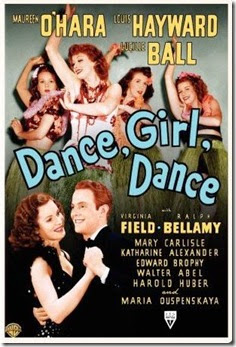 I expect the reason director Dorothy Arzner’s Dance, Girl, Dance (1940) made it into the 1001 Book is it is considered by many film critics as an early example of feminist cinema.  That said, I must say that it was a bit lackluster for my taste.  Yes, it was mildly entertaining to see a 20-year old M 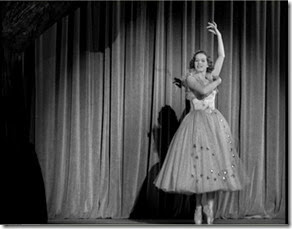 aureen O’Hara be upstaged by the Queen “B” actress of Hollywood, Lucile Ball, but that’s pretty much the most entertaining thing about it.

Judy O’Brien (O’Hara) is supposed to be a classically trained ballerina—by a former Bolshoi ballerina (Maria Ouspenskaya) nonetheless.  Of course, this premise is ridiculous as O’Hara was far from a ballerina, although she had taken dance lessons at school and had danced in The Hunchback of Notre Dame (1939).  Reflecting on the film, O’Hara admitted that she struggled mightily to get the ballet sequences down. Admittedly, the best dancer in the picture was Ball, who’d been both a Ziegfeld and Goldwyn girl.  Yet, O’Hara was cast as the classy but innocent Judy and Ball got the part of the floozy Burlesque queen, Bubbles (aka Tiger Lily White).  The characters suited both women—even if the ballet didn’t suit O’Hara.

The crux of the film hinges on one thing: sex. Bubbles has sex appeal and knows how to use it to get ahead, while Judy’s pristine innocence blocks her path to success and love at every turn.  Bubbles is the sort of woman 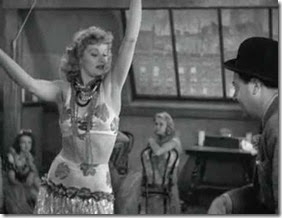 that millionaires like Jimmy Harris (Louis Hayward) use to get over their wives (Virginia Field). She’s also the type that men will pay money to come see dance (be it the hula or a comedic striptease). Poor Judy, all she’s good for is to get boos from the pervs who want to see Bubbles shake her ass instead of Judy’s would-be ballet routine and to make men realize they still love their wives.  It’s a comedy (sort of), so I know it’s supposed to be amusing that Bubbles always seems to thwart Judy’s dreams, but there’s an added element of amusement knowing that O’Hara would go on to be a highly regarded film actress and Ball would find herself the queen of television.

Once you get over the fact that a respected ballet producer (Ralph Bellamy) would track Judy down at a burlesque hall to give her a shot at stardom without having ever seen her dance, you can enjoy Ball’s comedic abilities and every now and again ca 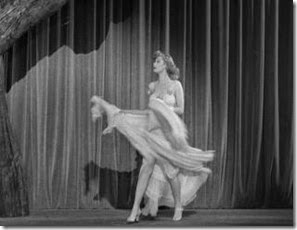 tch a glimpse of O’Hara’s noted fieriness. Ball wears the character of Bubbles as if she were born to play the part.  Sassy, spunky, and funny are the adjectives that best describe Bubbles.  She knows how to use what the good lord gave her to make her way in a man’s world.  Her rendition of “Mother, What Do I Do Now?” is worth the price of admission—especially if you’ve seen Marilyn Monroe’s famous blowing dress scene in The Seven Year Itch (1955)—who knew Lucy could teach Marilyn a trick or two about sex appeal?  Probably the best line of the film is when a stage hand tells Bubbles to give the audience all that she’s got and she quips, “They couldn’t handle it.”

Of course, O’Hara’s impassioned dressing down of the burlesque audience and her somewhat impudent behavior in night court after walloping Ball show glimmers of what made O’Hara such a likable actress.  Anyone familiar with that little spark that burns in her eyes when she is about to go off (just about the entirety of The Quiet Man) will recognize it when it finally shows itself right before the Irish comes out:

“Go on, laugh, get your money's worth. No-one's going to hurt you. I know you want me to tear my clothes off so you can look your fifty cents' worth. Fifty cents for the privilege of staring at a girl the way your wives won't let you. What do you suppose we think of you up here with your silly smirks your mothers would be ashamed of? We know it'd the thing of the moment for the dress suits to come and laugh at us too. We'd laugh right back at the lot of you, only we're paid to let you sit there and roll your eyes and make your screamingly clever remarks. What's it for? So you can go home when the show's over, strut before your wives and sweethearts and play at being the stronger sex for a minute? I'm sure they see through you. I'm sure they see through you just like we do!” 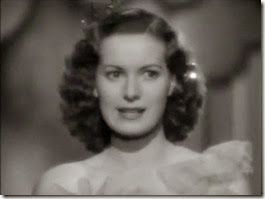 Yep, that’s the Maureen O’Hara I know…not a fake ballerina who would allow herself to be upstaged by Lucille Ball.

Overall, Dance, Girl, Dance is a rather forgettable picture. However, this was probably the best film performance of Ball’s career.  I’m sure there’s loads of fodder for feminist theorists to discuss about Dance, Girl, Dance, but, for me, at least, it’s a minor element which I‘m not that interested in.