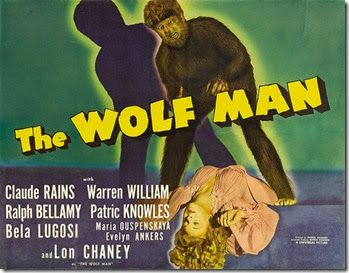 Of all the Universal Pictures’ monsters, The Wolf Man (1941) is probably the least frightening.  However, I must admit that I haven’t seen all four sequels, so maybe he becomes progressively more scary as time goes on.  Still, director George Waggner’s film is more violent than other Universal horror pictures like Dracula (1931), Frankenstein (1931), and Bride of Frankenstein (1935)—I must confess that I have not had the pleasure of watching The Mummy (1932), so I cannot say which is more violent. So, how can The Wolf Man be more violent but less scary than its monster-film cousins?  Unfortunately, The Wolf Man suffers from bad acting and a trite pseudo-psychoanalytic script, which, from me, at least, garnered more laughs than goosebumps.

After his older brother is killed in a hunting accident, Larry Talbot (Lon Chaney, Jr.) returns home to Wales to take his place next to his father, Sir John Talbot (Claude Rains). Never 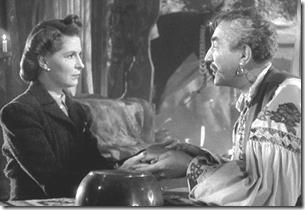 mind that Larry speaks with an American accent and has the gait and mannerisms of a farm hand and in no way appears to have been raised as the son of high-born lord of the manor.  All we need to know is that he likes to spy on women with a giant telescope and then use telescope garnered intel to creep them out enough that they agree to go on nightly walks with him.  While that may be an oversimplification of the plot, it’s probably the easiest and most interesting way to explain how two girls end up walking into the woods with him to have their fortunes read at a gypsy camp.  Unfortunately, Jenny (Fay Helm) goes first and has her palm read by none other than Bela Lugosi (well, his character, aptly named, Bela).  After about five seconds Bela sees a pentagram in Jenny’s palm, which is THE telltale sign to a werewolf that they have found their next victim. That’s right! Bela is a werewolf! But not for long, because after the wolf rips out Jenny’s throat, Larry uses his newly purchased silver wolf-head cane to beat Bela, the werewolf, to death, but not before he’s bitten in the process. Thus, Larry is now destined to become a werewolf.

The most compelling thing about The Wolf Man is the poem that Curt Siodmak penned to explain how a man might morph into a werewolf:

Even a man who is pure in heart
and says his prayers by night
may become a wolf when the wolfbane blooms
and the autumn moon is bright. 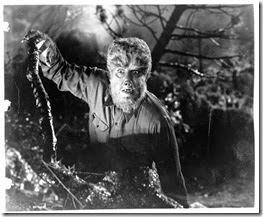 Several characters in the film utter these words, but for some reason when they are faced with the real possibility that there actually might be a werewolf on the loose they all throw their hands up in disbelief. It sort of reminds me of ParaNorman (2012), where an entire town markets itself on its witchcraft past, but refuses to believe in witches or ghosts.  Anyway, the poem itself is Freudian in nature and Universal visits the world of the id, ego, and superego and the duality of self that Paramount introduced with Dr. Jekyll and Mr. Hyde (1931). Unfortunately, Larry just doesn’t seem complex enough to have an id, let alone an ego or superego—even if Warren William’s Dr. Lloyd tries his hardest to make us believe that there is something more to Larry other than boringness.

The only person in town who knows Larry is a werewolf is the other gypsy fortune teller, 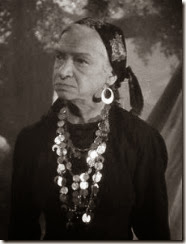 Maleva (Maria Ouspenskaya). If one person was correctly cast, it was Ouspenskaya, whose old-world somberness would make Disney World the unhappiest place on earth if she were ever to visit.  Forget that she happens to drive her wagon through the hazy woods at the most opportune times, usually after the wolf has killed or has been killed, she seems like the type of person who would know about werewolves. So, it’s somewhat believable when she says things like: “The way you walked was thorny though no fault of your own, but as the rain enters the soil, the river enters the sea, so tears run to a predestined end.”  A lot more of her and a lot less of William’s idiotic Dr. Lloyd and Ralph Bellamy’s inept Colonel Montford would have made me much happier. 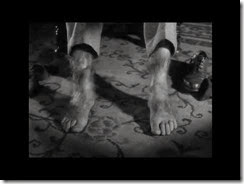 was a bit bothersome was the transformation from human to werewolf, which should have been the big payoff for a movie like this.  Yet, the first time that Larry starts to change into a werewolf all we get to see is his bare feet go from lily white to Yak-haired through a lap dissolve (which is pretty noticeable).  Perhaps I have been spoiled by the modern special effects age where human to animal (or alien, insect, etc.) transformations are a lot more spectacular because what I witnessed in The Wolf Man was pretty darn lackluster.

Overall, The Wolf Man was a run of the mill monster flick.  The acting, even from the likes of Rains, was phoned in and the plot left something to be desired.  Chaney, Jr., for his part should have demanded to play the werewolf and allowed someone else to play Larry—as an actor he was much better at portraying monsters than men.