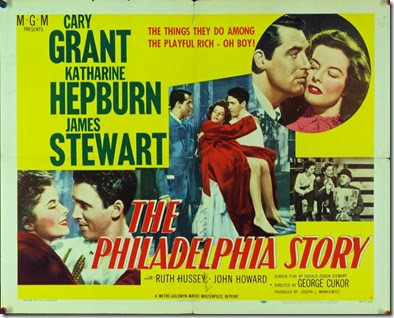 The Philadelphia Story (1940) is a remarkable film for several reasons.  First, the small but stellar cast was comprised of three Hollywood stalwarts—Cary Grant, James Stewart, and Katharine Hepburn.  Second, Donald Ogden Stewart’s expertly adapted Oscar-winning screenplay was engagingly witty and humanized Hepburn. Which brings me to the most remarkable thing about the movie—it probably saved Hepburn’s film career.  For all of those reasons, and many more, The Philadelphia Story is a classic Hollywood gem. 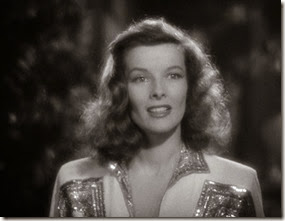 For any actor or actress, even Hepburn, being labeled “Box Office Poison” could be damaging.  After several of her films bombed at the box office, Hepburn had to face the fact that moviegoers just weren’t that into her.  To some she seemed hard, aloof, stilted, and affected.  Maybe it was her upper-class Northeastern upbringing or her Bryn Mawr education, but she just wasn’t that likable to many American movie ticket buyers.  Still, Hepburn could always fall back to the one audience that seemed to adore her—Broadway.  So when Philip Barry wrote the stage play of The Philadelphia Story specifically for Hepburn, she was more than happy to finance and star in it. Even before the play was a huge success on Broadway, Howard Hughes bought the film rights for his then-girlfriend, Hepburn, because he believed it was just the vehicle to restart her film career.  He was right, of course, and the rest is Hollywood history.

While the story is somehow labeled a screwball comedy, for me The Philadelphia Story is more of a sophisticated comedy.  The premise, of course, is a bit screwy, but it certainly is not in the screwball realm of The Awful Truth (1937), Bringing Up Baby (1938), or probably the greatest screwball comedy of all time, Easy Living (1937). Hepburn plays Tracy Lord, a socialite on the verge of marrying a co 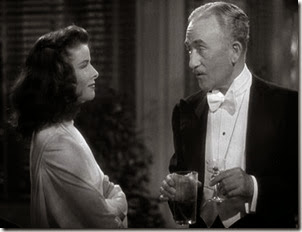 mplete bore, George Kittredge (John Howard), when her ex-husband, Dexter (Grant), shows up with two reporters in tow to cover the nuptials.  To avoid a family scandal involving her father (John Halliday) and a chorus girl, Tracy agrees to allow the reporters, Mike (Stewart) and Liz (Ruth Hussey), to take pictures and write an article for Spy magazine. Of course, this isn’t the only reason Dexter has crashed his ex’s wedding—the flame of love still burns bright for his rigid, unforgiving ex-wife.  And, this is what the story hinges on—Tracy’s inability to accept anyone’s human weakness, even her own.  In between exchanging sharps quips with Dexter, her father, and her beyond hilarious mother (Mary Nash) and sister (Virginia Weidler) and soulfully philosophizing with Mike, Tracy somehow grows up before the audience’s eyes and becomes, dare I say it, human.

Interestingly enough, while Grant and Hepburn had undeniable chemistry, as previously shown in Sylvia Scarlett (1935), Holiday (1938) and Bringing Up Baby (1938), most of the film focuses on a budding romantic relationship between Tracy and Mike.  Hepburn had wanted Spencer Tracy to play the part of Mike (this was two 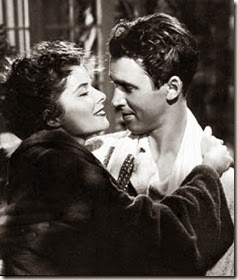 years prior to her having ever met Tracy) but he was unavailable, which probably was a blessing, because when you think about it who could have better humanized Hepburn than Mr. Likable himself, Jimmy Stewart?  He, along with director George Cukor, did such a good job of bringing out Hepburn’s vulnerable side that Stewart won his only Oscar (besides his honorary one).  Strangely enough, Stewart and Hepburn never did another film together, and this was also her last pairing with Grant as well. Oh well, both Grant and Stewart moved onto the world of Hitchcock and Hepburn, well, she finally got to work with Spencer Tracy, so I guess things worked out for everyone in the end.

Overall, The Philadelphia Story is a highly enjoyable film.  The story is witty and the cast is engaging.  It also serves as a historical footprint in the film career of Hepburn, because without it things may have turned out very differently for the woman who would go on to be recognized as one of the greatest film actresses ever.