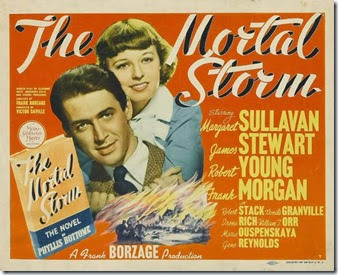 Released more than one year before Pearl Harbor, director Frank Borzage’s The Mortal Storm (1940) was a Hollywood rarity—it openly criticized the Nazi Party.  Even though Hitler’s reign of terror in Germany and parts of Eastern Europe went unchecked for over six years before the start of WWII, Hollywood, for the most part, stayed quiet on the subject until the U.S. entered into war with Japan, and then Germany, in 1941. So, when MGM distributed The Mortal Storm in June of 1940 it caused a slight buzz—especially in Nazi Germany, which not only banned the movie but all MGM films in the fatherland. This fact alone makes the movie special, but the story and acting also make this one of the most important pre-WWII anti-Nazi films ever made in Hollywood.

Based on the 1938 Phyllis Bottom novel of the same name, The Mortal Storm takes place in Bavaria (Germany).  The story begins on January 30, 1933. This date is important to the plot for two reasons: 1) Professor Viktor Roth (Frank Morgan) is celebrating his 60th birthday and 2) Adolf Hitler is n 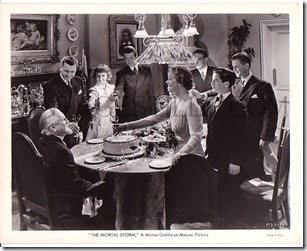 amed Chancellor of Germany.  Professor Roth has a beautiful family and is a distinguished scientific university professor on this date. The film sets out to show that the extremism of Nazism can destroy anything in a very short amount of time. You see, Professor Roth is non-Aryan (for some reason the story doesn’t come right out and say Jewish, even though we do see Professor Roth wearing an armband in a detention center which has a letter “J” on it) and believes in free thought and scientific evidence. These things don’t play well with the Nazis—the movie seems to indicate that they dislike Professor Roth’s science more than his religion, yet somehow they tie both together, as he refuses to denounce his belief that there is no difference between the blood of one human being to another, so I can somehow overlook the side-stepping of the Jewish question. 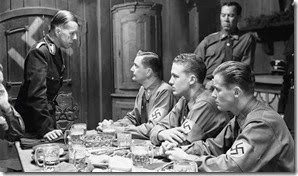 What makes the story compelling, however, is how Nazism can irreparably fracture relationships.  While I can’t completely wrap my mind around why Professor’s Roth’s two stepsons, Otto (Robert Stack) and Erich (William T. Orr), would join the Nazi Party in the first place (although they are von Rohns, which indicates that they are of noble descent, so that could be why), I think Borzage does a good job of showing their confliction between family and Party loyalty. For them, I think, it’s not the anti-Semitism that appeals to them but the idea of Germany regaining its status in the world.  Still, the closing scene of the film, which finds Otto walking silently through his empty family home, which has been destroyed by the philosophy his Nazi armband represents, is quite moving.

Of course, it is the complicated love-triangle between Professor Roth’s daughter Freya (Margaret Sullavan) and Fritz (Robert Young) and Martin (James Stewart) that is at the center of the movie.  In the beginning, Freya and Fritz are happily in love and become engaged. While Martin is disappointed by this, he’s more concerned with the Nazis taking over Germany.  He’s a lot like Professor Roth—he thinks people should be allowed to think for themselves and not be forced to join political parties 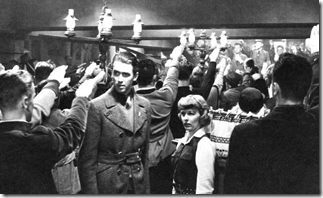 they don’t agree with.  Fritz, on the other hand, is a follower—he thinks the Nazis can rebuild the glory of the German Reich.  This, of course, puts Martin at odds with his childhood friends, Fritz and the two von Rohns, as well as what seems like their entire village.  His audacity of standing up for a non-Aryan school teacher, Professor Berg (Granville Bates), and his refusal to join the local Nazi party puts a target on his back.  And, Fritz’s hardline stance destroys his relationship with Freya, who gravitates toward Martin as a result.  The pivotal scene of the film, which I won’t completely disclose, spotlights how destructive Nazism can actually be for lifelong friends.

For me, the standouts in the film are Stewart, Sullavan, and Maria Ouspenskaya (who plays Martin’s soft but steely mother).  Other than Gregory Peck, I don’t know of any other actor who could so expertly play the moral 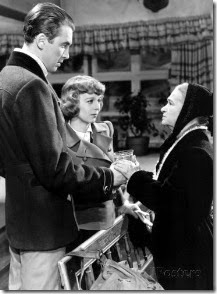 center of a film like Jimmy Stewart. The Mortal Storm is probably one of Stewart’s most nuanced good guy portrayals ever—there are no railings against wrong or manic cries for justice. Instead, he simply and soft-spokenly explains how he feels about Nazism.  And, while I’m not a huge fan of Sullavan, she is markedly compelling as Freya.  Her conversations with Fritz regarding the end of their relationship and her inquiries about the whereabouts of her father show that given the right material that she could pull off depth of character.  Finally, while she only had a few scenes, Ouspenskaya made the most of them.  You can see where Martin got his wisdom and countenance from, as Mrs. Breitner is not afraid to stand up to injustice.  The scene where she has Martin and Freya drink from the bridal glass is heartbreakingly stellar.

Overall, I think The Mortal Storm is a historically important Hollywood film. While it is practically forgotten today, it was an extremely important movie in 1940.  Yes, it was, by all accounts, a box office failure and critics thought it was dated, but it did something that most Hollywood films didn’t—it exposed the destructive nature of the Nazi Party in Germany—not as a war movie with soldiers and tanks, but as a film about the destruction of a family.