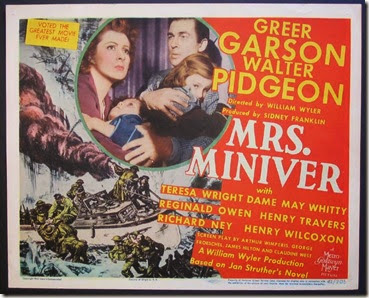 On most days I wouldn’t trade my parents for anyone, but if the stars aligned absolutely perfectly and I could pick my own I would choose Atticus Finch (Gregory Peck) from To Kill a Mockingbird (1962) and Kay Miniver (Greer Garson) from Mrs. Miniver (1942). For me, they are the epitome of good parenting.  Thankfully, they both have now found their way into the 1001 Book—he was an original and she was just added in the Tenth Anniversary edition.  To say that I adore director William Wyler’s Mrs. Miniver would be an understatement. I don’t care that it’s sentimental and propagandistic, or that I can’t in all good conscience rave about its cinematography or art direction (although they were good in their own right).  Besides the fact that Mrs. Miniver was one of  the most important war films made during WWII, it is also one of the best pieces of ensemble acting to come out of the studio system—starting with Garson’s spell-binding performance in the title role and ending with Henry Travers’ engrossing turn as Mr. Ballard.  Some may disagree, but in my opinion Mrs. Miniver is truly one film that deserves to be seen before one’s death.

Based on Jan Struther’s 1939 book of essays, which described a 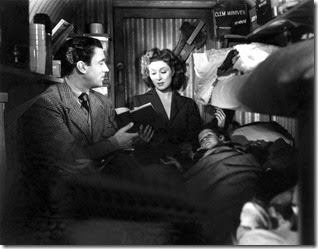 middle-class British woman’s concerns over Britain possibly going to war, Mrs. Miniver was William Wyler’s unapologetic answer to American isolationism. The Academy Award winning screenplay was written by Arthur Wimperis, George Froeschel, James Hilton, and Claudine West over a period of more than one year. It was the product of constant rewrites which were dictated by America’s ever changing views on the war. Wyler, a German Jew, vehemently thought that Nazism was a scourge upon humanity and believed that the United States should join Britain in repelling the German menace.  Unfortunately, many Americans and their elected representatives believed that the country should stay out of a war that did not concern them.  As such, Wyler knew that no conventional war movie, with soldiers, tanks, and guns, would aid in changing the minds of ordinary Americans, and so he made a motion picture about a small British village ravaged by total war (more specifically the Blitz). 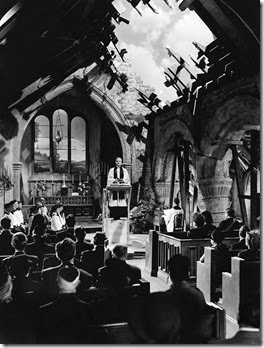 People understood that bombs fell on battlefields and soldiers died in war, but seeing everyday, ordinary country Brits, women and children and the elderly, being tormented, and in some cases killed, by German aerial bombs was a whole other matter--this was how Wyler planned to present Mrs. Miniver to American audiences. Although the film premiered six months after the Japanese bombed Pearl Harbor and the U.S. entered the war, it still had a powerful message for all audiences, which was delivered by the village vicar (Henry Wilcoxon) in the somber but rousing final scene: “This is the people's war! It is our war! We are the fighters! Fight it then! Fight it with all that is in us, and may God defend the right.” Yes, this speech was pure propaganda, but in the words of British Prime Minister Winston Churchill, it was “propaganda worth a hundred battleships." For his part, President Franklin D. Roosevelt ordered that the vicar’s entire speech be printed on leaflets and dropped over Europe and he had the Voice of America broadcast it on several different occasions.

The reason Mrs. Miniver was so inspiring to Americans and Britons alike is that the Miniver family and their village were ordinary people attempting to survive in extraordinary circumstances. The story begins by demonstrating that the Minivers are everyday middle class people who want nice things for themselves and their children. Like most women, Kay (Garson) buys frivolous things that she doesn’t need just because she wants them and then attempts to hide the purchases from her husband, Clem (Walter Pidgeon), who also purchases things he doesn’t need. They have two young children at home (Christopher Severn and Clare Sandars) and a son, Vin (Richard Ney), who occasionally comes down from Oxford to enlighten them about how much he is learning about the world.  They have a cook (Brenda Forbes), a housekeeper (Marie De Becker), and a social club to go to on weekends. Quite simply, they are your typical middle class British 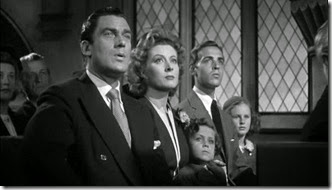 family. Duty and responsibility mean something to people like this, and so when war does come they do as they are expected: they abide by blackout regulations; they build and stock a bomb shelter; Clem joins the Home Guard and risks his life to aid the evacuation at Dunkirk; and, Vin voluntarily enlists in the RAF.  Moreover, they do all of these things without complaint. Nothing is insufferable—not bombs falling on their home; not a shot down German soldier demanding food; and, not the death of a loved one. As long as they remain strong, resilient, indefatigable people who are willing to fight for their way of life there is nothing that can destroy them—as long as there is a will there is a way. And, of course, this turned out to be true, since it was the British stiff upper lip which resolved itself not to give in when German bombs reigned down on the nation for more than eight months. 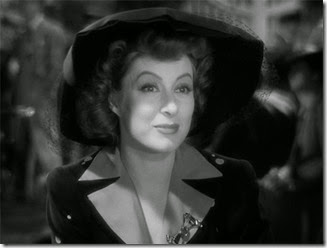 It’s difficult to imagine anyone else other than Greer Garson playing Mrs. Miniver, but MGM first asked Norma Shearer and then Ann Harding to play the role.  Both women declined because they didn’t want to play a mother who had a grown son. Garson, who was younger than both of those women, also had concerns but Louis Mayer convinced her to take the part and the rest is, as they say, history.  Her soft but steely turn as one of cinema’s most courageous and determined mothers and wives not only earned her her only Academy Award, it also made her the biggest female star at MGM. Her stoic countenance, regal beauty, and effortless ability to convey her character’s thoughts with one look were perfect for the character of Kay Miniver.  For me, her performance is flawless, which as a Bette Davis fan is somewhat disheartening because I so love Ms. Davis as Charlotte Vale in Now, Voyager (1942), but there is no doubt in my mind that Garson rightfully earned the 1942 Best Actress Oscar statute over Davis.

Mrs. Miniver, of course, would not have been nearly as effective as it was without its stellar cast. Obviously Garson’s Oscar-winning performance is the star of the show, but Teresa Wright, Dame May Whitty, and Henry Travers are also standouts in the production.  Wright, who deservedly 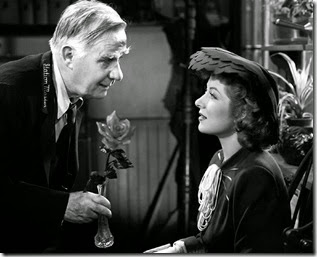 won a Best Supporting Actress Oscar, portrays Mrs. Miniver’s daughter-in-law Carol not as a hysterical war bride but as a realistic young woman who wants to enjoy her happiness, no matter how brief it may be.  As for Whitty, her Lady Beldon required her to humorously represent the old guard while also demonstrating indignation at what the world had devolved into  due to war.  And, then there is Henry Travers, the renowned character actor.  Perhaps the most touching scene in the movie is when he first shows Mrs. Miniver the rose that he wants to name after her.  In this, he must display pride, nervousness, and affection for both his rose and Mrs. Miniver.  It’s such a quiet and nuanced scene and the perfect way to first introduce Mrs. Miniver’s many wonderful qualities to the audience.

Although I know it’s pure propaganda and overly sentimental at times, for me Mrs. Miniver is one of the best wartime movies ever made.  I am exceptionally happy that the editors of the 1001 Book finally inducted it into its table of contents—now, if only they would remove some of the absolutely horrible films that they insist remain on the list.