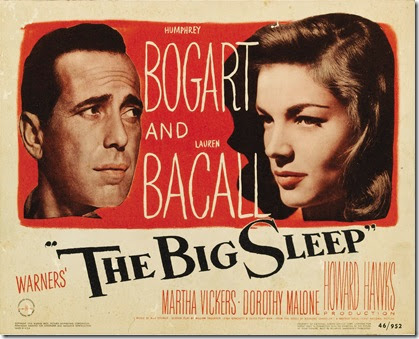 There is no doubt that Humphrey Bogart and Lauren Bacall had oodles of chemistry, which jumped off the screen whenever they were paired together. And, they had a way of making risqué dialogue sound even more racier than it was probably intended. Yet, the fact remains that early in her career Lauren Bacall just wasn’t a very good actress.  Fortunately for her, she had two things on her side: her ability to project sexual tension with Bogart and a cool beauty that made her the perfect femme fatale. Strangely enough, however, she isn’t the most compelling femme fatale in director Howard Hawks’ The Big Sleep (1946)—that honor rests with Martha Vickers, who plays Bacall’s younger sister in the movie.  This is a rather disturbing fact when you consider that many of Vickers scenes were cut after Raymond Chandler, upon seeing the two women on-screen together, commented that Vickers unequivocally overshadowed Bacall.  This, of course, is a sad tidbit to know, since, for me at least, whenever Vickers made an appearance on the screen the movie always seemed to get better.  Perhaps if the film’s plot hadn’t been so convoluted and full of countless red herrings I could have overlooked the sidelining of Vickers in favor of Bacall, but The Big Sleep suffers acutely from an ill-conceived narrative. 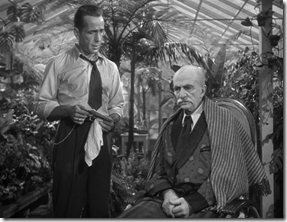 Based on Raymond Chandler 1939 novel of the same name, The Big Sleep is a film noir detective story set in Los Angeles.  Private dick Philip Marlowe (Bogart) is hired by General Sternwood (Charles Waldron) to handle his youngest daughter Carmen’s (Vickers) gambling debts, which are a source of blackmail—but there’s more to the story than that.  Carmen is a drug addict and nymphomaniac (per the Hays Code, this is only alluded to) with a nasty temper who has a very bad habit of getting caught up in all kinds of jams.  These jams, unfortunately, also ensnare her older sister, Vivian (Bacall), into her sordid affairs.  Don’t get me wrong, Vivian is a piece of work, too, but while she might like to gamble and emasculate men, she’s smart enough not to pose for pornographic pictures (again, only alluded to) or have affairs with chauffeurs and errand boys—and, most importantly, Vivian isn’t the reason countless men meet their big sleep—death.  Marlowe, for his part, must navigate the endless webs of deceit spun by the Sternwood women to fully comprehend the corrupt and seedy world which controls their fate.  Along the way, he develops a hot-and-cold relationship with Vivian that is tempered by their mutual distrust of one another. In the end, he must make a fateful decision to free the Sternwood women from a hell of their own making.

First, let me say that The Big Sleep is not a bad movie. Yes, the plot is difficult to follow, but even I must admit that it is never boring—it is, however, irritating and meandering. Chandler, himself, admitted that when Hawks and screenwriters William Faulkner, Leigh Brackett, and Jules Furthman contacted him for clarity regarding the story’s narrative that even he could not explain all of the plot developments—this was a bad omen.  It also doesn’t help that the Hays Code restricted the screenwriters from telling the story as it ought to have been told. The novel is both more complex and perverse than what eventually made its way to the screen in 1946. Audiences would have to wait

until Michael Winner’s 1978 film version of the novel to see the truly explicit nature of the book.

By far, the most entertaining thing about The Big Sleep is how far the screenwriters pushed the censors with their sexually charged dialogue and innuendo.  For example, early in the film Dorothy Malone makes a brief appearance as a bookstore clerk who spends an afternoon with Marlowe doing everything but discussing books.  Of course, none of this is shown, but it doesn’t need to be because it’s obvious what has occurred.  And, then there is probably one of the more risqué exchanges ever to get past the censors: the racehorse metaphor.

Vivian: Speaking of horses, I like to play them myself. But I like to see them workout a little first, see if they're front runners or come from behind, find out what their whole card is, what makes them run.

Marlowe: Find out mine?

Vivian: I think so.

Vivian: I'd say you don't like to be rated. You like to get out in front, open up a little lead, take a little breather in the backstretch, and then come home free.

Vivian: I haven't met anyone yet that can do it. Any suggestions?

Marlowe: Well, I can't tell till I've seen you over a distance of ground. You've got a touch of class, but I don't know how, how far you can go.

Vivian: A lot depends on who's in the saddle. 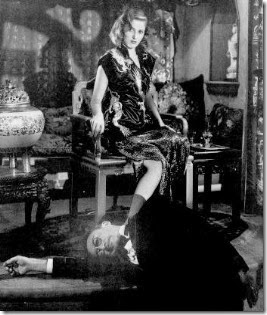 This exchange alone is enough to make me suffer through the film’s ever winding and unwinding plot. And, of course, then there’s also those brief moments when Vickers lights up the screen.  From her first exchange with Marlowe, “You’re not very tall are you"?”, to her would-be seduction of him, Vickers is electrifying.  It can’t be said too many times, The Big Sleep would have been a much better film with more of her in it. And, even worse, the second most interesting woman in the film isn’t even Bacall, but rather Sonia Darrin, who plays every scene she’s in with a compelling level of intensity sorely lacking on the part of Bacall.

Overall, The Big Sleep is the type of film you wish were better because it does have some redeeming qualities. Yet, it suffers from a labyrinthine plot and a less than stellar leading lady. Thankfully, the dialogue was entertainingly witty, and occasionally Vickers or Darrin popped in and made the film much more interesting.