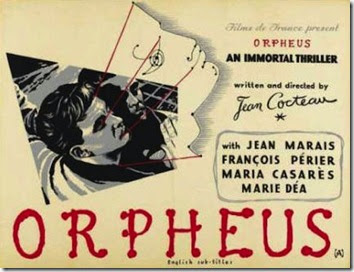 Writer/poet, and sometimes director, Jean Cocteau was a fan of surrealism and an opium addict—this explains a lot about his own unique retelling of the Orpheus myth, Orphée (1950). For those unfamiliar with the Greek myth, Orpheus is a musician who is compelled by his love for his wife, Eurydice, to descend into the underworld to reclaim her. He so enchants the gods with his lyre playing that they allow Eurydice to return to the upper world on the condition that Orpheus not look at her on the journey out of the underworld, but he does and she dies again.  Cocteau’s Orphée is most assuredly not a classic interpretation of this myth but, rather, a surrealistic reimagining of one of the most romantic tragic myths ever composed.  Simply put, it’s an art film with cool special effects and a bizarre storyline.

Set in modern day Paris, the story begins with famed poet Orpheus (Jean Marais) witnessing an accident involving a young poet named Cégeste (Edouard Dermithe) and being told by a princess” (Maria Casares) to escort her and the body to the hospital. However, the princess is not really a princess but actually Death, and she’s come to claim Cégeste as her servant—she brings Orpheus along for the ride because she wants to enchant him with her beautiful mystique. When he is escorted 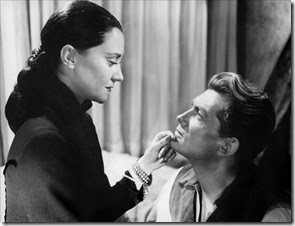 home by Death’s assistant Heurtebise (François Périer) in her Rolls Royce, he is consumed by his love for Death and the messages that she has transmitted to him via her car radio, totally ignoring his pregnant wife, Eurydice (Marie Déa).  Every night when the couple goes to sleep Death emerges from a mirror in their bedroom to watch Orpheus sleep.  Wanting Orpheus for herself, she arranges an accident to befall Eurydice, knowing that Heurtebise will convince Orpheus that he must reclaim his wife from the underworld.  In an underworld that looks like the blitzkrieg has hit it, Orpheus is reunited with Death and doesn’t seem too concerned with getting Eurydice back, although he told Heurtebise that he wanted to see both women.  The judges see that Eurydice was unjustly brought to the underworld and release her on the condition that Orpheus NEVER look at her again—anywhere. Eventually he does and she returns to the underworld, and then Cocteau rewrites the myth with his own strange ending, which I will not reveal because it’s stupid and, also, because I don’t want to “ruin” it for anyone who hasn’t seen it.

The premise for Orphée is rather inspired but that doesn’t mean that the finished product is.  The story suffers from an idiotic ancillary plot device (the Bacchante’s dislike of Orpheus) and requires too much suspended common sense on the viewer’s part—even for watching a fantasy film. Altho 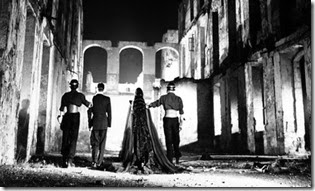 ugh they are minutely necessary for Orpheus’ second journey to the underworld, the Bacchante’s distaste for Orpheus is never explained and at the end of the story they seem to have floated away into nothingness. Additionally, in the myth, Orpheus truly loved his wife and wanted her to return to him.  In the movie, Orpheus could care less about his wife and is totally consumed with passion for Death—it’s a ridiculous love triangle.  This would-be love triangle, in turn, makes the ending of the movie completely unpalatable. The ending will have you asking: really, that’s how it ends?  It’s surrealist art films like this that leave a bad taste in my mouth. 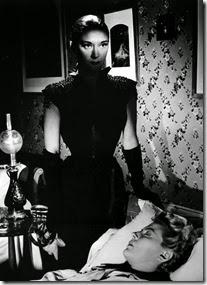 However, there are two saving graces to Orphée: the acting is good and the special effects are entertaining.  Regarding the acting, the four principal leads (Marais, Casares, Déa, and Périer) are all enchanting to watch.  In particular, Périer does a stellar job of portraying Heurtebise’s unease in carrying out Death’s orders while falling in love with Eurydice himself.  His resigned disgust of Orpheus’ behavior is the one thing that somehow holds the story together.  And, while I know many people found Casares to lack the screen presence to play Death, I rather enjoyed her interpretation of a nihilistic dominatrix. Quite frankly, if the story had been just about Death and Heurtebise I would have been quite pleased because Orpheus does nothing for me in this, even though I can’t really say that Marais plays the role poorly.  As a matter of fact, a love triangle between Death, Heurtebise, and Eurydice (who is played as a universally sweet woman by Déa) would have made a much more compelling story.

Still, it is the special effects that primarily saves this movie from my 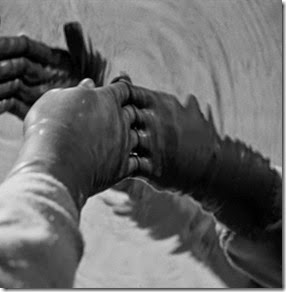 ultimate ire. Strangely, the funny thing is that Cocteau doesn’t really use any revolutionary special effects.  He relies heavily on reverse motion and back projection to dazzle his viewer—but he does it so cleverly that you have to admire it.  He uses reverse motion to make it appear that a pair of “magical” gloves put themselves on the hands that are to wear them and also to break mirrors, which are used to transport people to and from the underworld.  The best line of Orphée explains why: “Look at a mirror for a lifetime you will see death at work.” Although it appears as if the characters are walking through mirrors, Cocteau filmed still pools of water which reflected first the actors hands, which were in the pool of water, and then their faces which appeared in the water when the hands were removed.  Today such special effects may seem cheap, but in 1950 people had to be a little more creative than having a computer program do all the heavy lifting.

Overall, Orphée’s bastardization of the Orpheus myth annoys me beyond comprehension. That said, Cocteau cleverly uses special effects to create a dreamlike atmosphere that is quite aesthetically pleasing and, thus, saves the film, somewhat, for me.