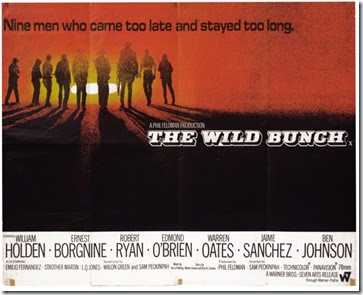 Revisionist westerns aren’t really my thing.  Yes, they are more realistic and grittier than the classic westerns of John Ford, but, for the most part, they seem to have more style than substance.  If I’m going to watch an ultra-violent western it better darn well have a compelling storyline that makes me care if someone gets shredded by bullets.  For example, Sergio Leone’s Once Upon a Time in the West (1968) is a savage film, but at least it’s plot driven and makes you care about (or in Henry Fonda’s case, hate) its characters. Yet, in the case of director Sam Peckinpah’s The Wild Bunch (1969), I had no investment in either its plot or its characters.  Yes, the gunfights are superbly edited and there is no sugar-coating what being shot actually looks and feels like, but so what?  I felt absolutely nothing when all of the outlaws (the “Wild Bunch”) got slaughtered for being sentimental idiots. And, I don’t care if Peckinpah believed that he was making an allegory about the senseless violence taking place in the Vietnam War at the time he was making the movie. At the end of the day, the only thing that matters to me is that at no point in the story did I find myself caring one way or the other about what happened to any of the characters.  I was not entertained, educated, or enthralled by anything in The Wild Bunch other than the, then new, editing style that Peckinpah and editor Lou Lombardo employed to create an epically barbaric final gunfight.  For me, that’s just not enough. 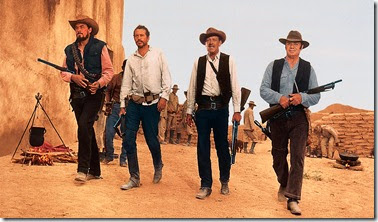 Penned by Peckinpah and Walon Green, the story is set along the Texas-Mexico border in 1913—the last days of the wild west and its outlaws.  Pike Bishop (William Holden) is the leader of a group of outlaws pursued by bounty hunters hired by the railroad.  After surviving an ambush at a bank in Texas, the “Wild Bunch” flee into Mexico to regroup and plan their next move. The outlaws are at a disadvantage because the bounty hunters are led by Pike’s former partner, Deke Thornton (Robert Ryan), a man familiar with how the group operates. A short flashback shows us that Deke had been captured by the law due to Pike’s whoring and drinking ways. As such, Pike suffers from guilt, while Deke must deal with his own betrayal of the outlaw code: “When you side with a man, you stay with him! And if you can't do that, you're like some animal, you're finished!” Anyway, the outlaws are hired by a corrupt Mexican Federal Army general named Mapache (Emilio Fernandez) who is being advised by emissaries of the German government (quick history lesson: in 1914 the First World War started, but before that the Germans had made preemptive plans to engage the Mexican Army if America entered the war—there’s a whole saga that played out in 1917, please look up the Zimmermann telegram if you want to learn more) to steal Army guns off a train, which they do quite cleverly. However, one of the “Wild Bunch”, Angel (Jaime Sanchez), is a member of one of the villages that Mapache has raped and pillaged and demands he be paid with a case of guns. When Mapache finds out Angel took the guns he takes him prisoner and tortures him. At first the outlaws do nothing, as Pike remarks that “$10,000 cuts an awful lot of family ties”, but eventually they decide that four men should take on an entire army.  You do the math…

The “Wild Bunch” are scumbags.  They kill innocent people and steal

things that don’t belong to them.  They like to drink, screw, and joke around.  This is not the type of behavior that elicits sympathy from me when their way of life is threatened by cars and Gatling guns. The ambiguous villain seems to be Deke, but he’s nothing more than a mild annoyance and he most assuredly does not come off as “bad” man.  I suppose Mapache is pretty much a bastard, but no more than the “Wild Bunch” themselves.  As such, I cannot bring myself to root for or against anyone—they’re all low-life bastards who deserve to die.  Plus, there is truly no logically explanation as to why they decide to go on a suicide mission.  They had $10,000! And, for those who are going to say there’s honor among thieves, please remember that Pike shot one of his fellow outlaws because he was injured and couldn’t ride his horse.  Yes, Pike was old and decrepit and the outlaw life was waning, but Dutch (Ernest Borgnine), Lyle (Warren Oates), and Tector (Ben Johnson) still had a lot of years ahead of them, and $10,000 would have been a great way to start a new outlaw-free lifestyle. So, when that infamous last stand takes place I just sit and watch the revolutionary editing and think to myself: that’s sure a lot of blood and bullets. 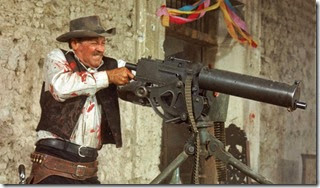 The one thing that saves The Wild Bunch from my complete disdain is its technical elements.  Cinematographer Lucien Ballard had his hands full capturing Peckinpah’s wide-screen vision of the bloody shootouts, using up to six cameras at varying film rates all at once to capture the action.  Additionally, Ballard used telephoto lenses that brought the foreground and background into the same visual perspective.  All of Ballard’s camerawork, which was comprised of over 300,000 feet of film shot at varying speeds, was then spliced together by Lombardo and Peckinpah to create dazzling action sequences that could at one moment be a rapid-fire rampage and then the next a slow-motion symphony of destruction.  And, when you think about it, what do most people remember about The Wild Bunch—the famous Last Stand…and perhaps it’s theme song.

Overall, The Wild Bunch is a ferociously violent western that benefits from masterful editing and cinematography. However, the story is far from compelling and none of the characters are worth emotionally investing in.