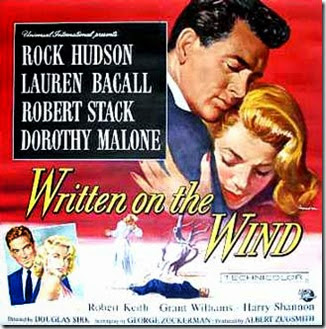 Of Douglas Sirk’s many heralded melodramas, Written on the Wind (1956) is probably my least favorite.  Yes, the Technicolor is as bright as ever and Sirk, generally, draws out  good performances from his cast, but the story and most of the characters fall flat for me.  If you take away Dorothy Malone’s scintillating performance, there is nothing compelling about the film. 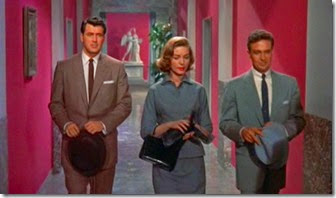 Based on Robert Wilder’s 1945 novel of the same name, Written on the Wind opens with a bang—literally. A drunken man, who we later learn is Kyle Hadley (Robert Stack), tears across a Texas road toward his family’s estate and stumbles into the house. As leaves blow inside the open door, we see a woman, who we soon learn is Kyle’s sister Marylee (Malone), slam the door shut. A few moments later, we hear a shot ring out and we see Kyle stagger back outside with a gun in his hand, where he proceeds to crumble to the ground dead.  And, then the wind blows again and turns a calendar back more than a year—Sirk’s not so clever way of saying he’s going to show us the events that led up to Kyle’s last fateful night.  It all began when Kyle’s best friend Mitch (Rock Hudson) brought a pretty secretary to lunch who caught Kyle’s eye. The heir to an oil fortune and a world-class playboy, Kyle doesn’t care that Mitch saw Lucy (Lauren Bacall) first—what he wants he gets.  And, so he turns on the charm by flying her to Miami in his private plane and stocking a luxury suite with fine clothes for her. When she informs him that she’s not a tramp he marries her after knowing her for only one day.  This was undoubtedly a mistake on Lucy’s part, because she soon learns that her new husband not only suffers from anxiety, depression, and alcoholism, but that he also has an inferiority complex when it comes to Mitch—the man his father (Robert Keith) adores and calls his second son.  It also doesn’t help that her sister-in-law, Marylee (Malone), is a world-class bitch and whore who is obsessed with Mitch—who happens to only have eyes for Lucy. When Kyle learns that he has weak sperm and that he may never be able to father a child he goes into a tailspin, which is exacerbated by Marylee’s insinuations that Mitch and Lucy are having an affair.  Oh, it’s so soapy—even for Sirk!

Once again, Russell Metty was Sirk’s cinematographer of choice 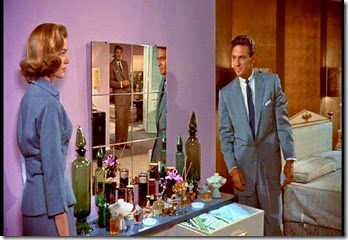 for Written on the Wind. Over a period of seven years, Metty and Sirk worked together on ten films. There’s a reason that of the more than 30 films that Sirk directed in his career that his most highly regarded ones had Metty as their cinematographer: Magnificent Obsession (1954), All That Heaven Allows (1955), Imitation of Life (1959), and Written on the Wind. Metty’s deft understanding of how to use light/shade and angles to superbly capture the mood of a scene was the perfect compliment to Sirk’s brilliance when it came to visual composition. Most of their films had a reoccurring visual motif (for example, their endless use of windows in All That Heaven Allows) which they employed throughout the picture. Written on the Wind was primarily about psychologically fractured people, so Sirk and Metty used several mirror shots to depict characterization.  Additionally, I suppose they wanted to make a statement about how empty and sterile the lives of the Hadleys were because they used a lot of glaringly bright lights and garish colors—gone was the matte world of All That Heaven Allows, replaced by full enamel, ala Magnificent Obsession. 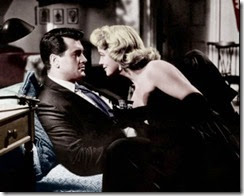 My overall disregard for Written on the Wind stems from the fact that I could never bring myself to care about what happened to the characters. About twenty minutes into the film it becomes obvious that the most entertaining and engaging person in the movie, Marylee, is doomed to end up unhappy, so it’s irritating to watch Mitch politely pine for the beyond boring Lucy, who spends most of her time fretting over her overacting (on so many levels) husband.  Sure, Marylee’s a tramp and a manipulator, but her pathological desire to have Mitch love her is far more exciting to watch than both Bacall and Hudson’s mediocre performances.  Of course, they may have only appeared to be sleepwalking through this movie because Dorothy Malone was completely on fire throughout it.  Malone deservedly won a Best Supporting Actress Oscar for her turn as a bitter woman who vehemently and 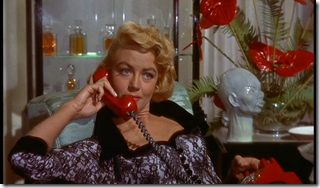 defiantly acts out as a result of being constantly rebuffed by the man that she loves. Her testimony scene at the inquest is nothing short of brilliant—full of rawness, honesty and vulnerability.  It irks me beyond measure that this most pivotal scene has absolutely no chance of changing the inevitable ending of the film—boring and boring ride off together while the most electrifying person is doomed to an empty life of unhappiness.

Overall, I’m not a big fan of Written on the Wind. It’s not a bad picture, per se, but it is irritatingly predictable and cursed by the fact that every character other than Maryann is beyond boring.  Thank you, Dorothy Malone, for making it somewhat palatable.